By the time Pat Chun joined reporters for a Zoom call, most in the Washington State universe had already absorbed the news the Cougars wouldn’t be playing Stanford on Saturday night in the Bay Area.

One day after it was learned starting quarterback Jayden de Laura had tested positive for COVID-19, Washington State’s game against Stanford was canceled and declared a no-contest because of the Cougars falling below the 53-man scholarship requirement, the Pac-12 Conference confirmed in a statement Friday afternoon.

Athletic director Pat Chun said the team learned at approximately 11 a.m. four more football players had been placed in the COVID-19 protocol. With five others placed in the protocol earlier this week, WSU’s football team has nine players in isolation, Chun said. The Cougars had nobody in the COVID-19 protocol before their last game, a 43-29 loss to No. 11 Oregon last week at Martin Stadium.

Friday’s news, of course, places next week’s Apple Cup in jeopardy. WSU is scheduled to host Washington at 7:30 p.m. on Friday and Chun indicated the school would have better idea of the game’s feasibility by Sunday. 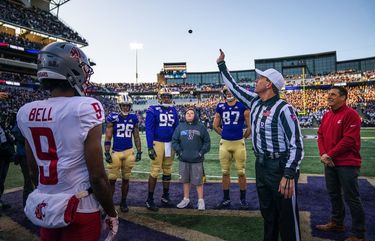 WSU football won’t play this weekend due to COVID-19. Could next week’s Apple Cup be in jeopardy?

That’s a discussion Chun and UW AD Jen Cohen may be holding in the next few days, but the WSU AD didn’t have enough information when he spoke to reporters Friday afternoon, and news of the Stanford cancellation was still too fresh to look that far down the road.

“My bag, the travel bag, is still in my car, so the expectation when I left the house this morning was a happy wife and daughters cause I’d be gone finally for another night,” Chun said. “So, today was just really about getting on that plane and getting to Stanford and unfortunately that did not happen.”

Stanford explored other options to play a game this weekend, but determined no alternatives made sense, the school said in a statement.

In accordance with school policy, Chun declined to say how many of WSU’s players in COVID-19 protocol had tested positive and how many were there via contact tracing.

In order to play, the Pac-12 requires that teams have 53 scholarship players available, including at least one quarterback, seven offensive linemen and four defensive linemen. The Cougars have been able to field a full squad the first two weeks of the season, but it hasn’t come without its challenges, and more came up this week.

“I’m disappointed for our team and our players,” first-year WSU coach Nick Rolovich said in a statement. “They have battled through so much this year. We had a good week of practice and were excited to play this game. I recognize the pain they feel with this lost opportunity but this 2020 football team is a resilient group of young men.”

As Chun alluded to, the Cougars have faced other obstacles this season, with a handful of players entering the transfer portal or opting out of the 2020 campaign altogether. Will Rodgers III, a senior who’s started in a handful of games for WSU over the years, was the latest player to enter the portal, submitting his name just two days after the team’s 43-29 loss to 11th-ranked Oregon.

After the season opener at Oregon State, Rolovich told reporters his team had 32 players unavailable and that they didn’t bring a full travel squad to Corvallis.

“If a few bad things happened,” Rolovich said, “I’m not sure we could’ve lined up.”

Injuries have also been an issue for the Cougars. Junior running back Max Borghi has been the most notable absence through two games, but WSU played without “Z” receiver Calvin Jackson Jr. in the most recent game, and the Cougars have had to survive without a variety of other players on their depth chart early in the season — for injuries and other reasons. That list includes: edge Willie Taylor III, safeties Chad Davis Jr. and Tyrese Ross, cornerback Derrick Langford and linebacker Travion Brown.

Before de Laura’s positive COVID-19 test, there had been only one known case on WSU’s football team and just five within the athletic department since daily antigen testing began in October. As of last week, the school had administered more than 5,000 daily tests to football, men’s basketball and women’s basketball players.

That number has more than doubled this week, and it’s not exclusive to the football program. It was announced Wednesday that men’s basketball coach Kyle Smith had tested positive for COVID-19, forcing him to miss at least one game on the team’s bench. No other members of the basketball program were placed in the COVID-19 protocol at the time.

WSU-Stanford becomes the sixth Pac-12 game to be canceled or altered this season and the second one this week. At this point, four other games in the conference are moving ahead as scheduled.

During the first week of the season, games between Washington and California, and Utah and Arizona State were called off due to COVID-19. Last week, California’s game against Arizona State was canceled, as was UCLA’s against Utah, but the Golden Bears and Bruins still managed to sneak in the aforementioned crossover game. Earlier this week, ASU’s game against Colorado was also canceled.