The Washington State football team that begins spring practice Wednesday will look much different than the Cougars did last season, in style and personnel.

Gone is the run-and-shoot offense that coach Nick Rolovich brought to the Palouse and in is the modified version of the Air Raid that new offensive coordinator Eric Morris used as the head coach at FCS Incarnate Word.

Also gone is two-year starting quarterback Jayden de Laura, and in is Cameron Ward, the touted transfer from Incarnate Word. 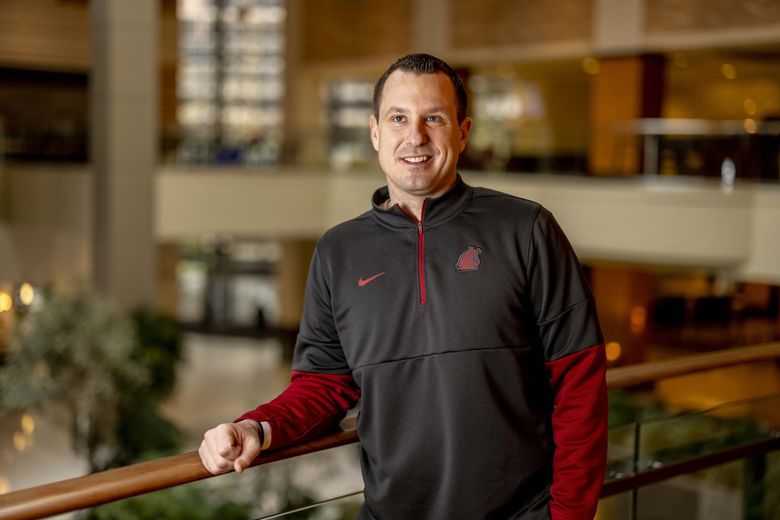 After an unlikely journey, WSU’s Jake Dickert is ready to settle down and build a football program

“There was a bunch of really hard decisions when I took over, and changing the offense was probably the biggest one,” Dickert said. “There was a certain style I was looking for, a certain style that fits Washington State, and a certain energy and passion that I thought our program needed.

“As I looked all over the country at guys who still threw the ball, but had an emphasis on the run game and used the H-back/tight end position like I wanted to and used some tempo — everything kept coming back to Eric (Morris). I think he’s one of the bright young minds of college football, and I think he’s going to build something very special here.”

Ward, 6 feet 3 and 225 pounds, flourished under Morris’ system at Incarnate Word, throwing for 4,648 yards and 47 touchdowns as a sophomore last season. Dickert has compared Ward to Buffalo Bills star Josh Allen, who played at Wyoming when Dickert was there.

“The first time I saw Josh throw the ball, it was different; you could see it, and ‘whoa,’ ” Dickert said. “Watching Cam’s tape and his style of offense, you notice, ‘Wow, this quarterback is good.’ He makes throws on the opposite-side hash on these comebacks with a flick of the wrist, and you’re thinking, ‘This is something different.’ “

Dickert said Tuesday the quarterback position is what he was most interested in watching at spring practices.

“It’s going to be the quarterback position, first and foremost,” Dickert said. “I think we all know if you’re not settled in that spot — and commanding that spot — I think we all know where that needs to go. I am excited that Cam is ready to take that over, and I have seen his leadership blossom. … I repeat, this is a quarterback-driven offense. There is a lot of freedom in that position, (Ward) controls a lot of the things that we do, and he is a football smart guy. Just the development in that room is going to be vitally important.”

Dickert said Ward will get the majority of snaps in the spring, and barring something unforeseen, it looks like for the first time in a few years there will not be a question who the starting quarterback will be in the fall.

The Cougars also have a nearly completely new coaching staff, one that has drawn praise from Washington State athletic director Pat Chun.

“One of the great challenges for a first-time head coach — one of the great pitfalls you typically see — is the type of staff they put together,” Chun said. “I have been nothing short of impressed — really from the moment we sat down and he said who he was going to target. But then he has to actually go out and get them, and one by one he got the people who were his targets.”

Dickert said there were specific qualifications that he was looking for while assembling the new staff, which includes defensive coordinator Brian Ward.

“In building the staff, it was very important that I personally worked with them and I knew them, or at some point in their careers they were at Washington State, because I want to bring stability to our program,” he said. “To create long-term success, we need stability. The past three years have been anything but that.”

Dickert said he is interested in watching the defense under Ward, who replaced Dickert as the coordinator.

“Our defensive scheme, what I love, is that you just can’t say it’s the same,” Dickert said. “We brought Brian in and there are all kinds of new ideas. … We’re just evolving. If you’re not evolving in this game, you’re dying. And I am excited about the new things we are working on on that side of the ball to take another step.”

The Cougars finished last season with a 24-21 loss to Central Michigan, a game in which it was missing many star players. WSU looked in bad shape when it was trailing 21-0 at halftime, and de Laura had been knocked out of the game with an injury in the second quarter.

But former walk-on quarterback Victor Gabalis, who began the season at No. 4 on the depth chart, led a remarkable comeback that fell just short.

“I think it showed the heart of our team and the true passion,” Dickert said.

Dickert said he doesn’t know how good WSU can be this season, “but I’m not going to put a ceiling on us.”

“When you recruit and develop the right guys, they are always ready for their moment,” Dickert said. “And we’ve got guys that are waiting to be the next Max Borghi, the next Travell Harris and the other next guys. So we’re excited about what we can be, but this is a new staff and really a new program … and we need to get used to our schemes and stay healthy.”

How many wins would be a successful season?

“I wouldn’t want to put a number of wins on it,” he said. “Our guys know I am a 1-0 mindset guy, and individual moments can compile over time. But let’s focus on being our best daily, and great things can happen. But I think we can be a winning team. We have some of the pieces, but we’ve got to go out and do it.”

Dickert said Tuesday that redshirt freshman Fa’alili Fa’amoe has moved from the defensive line to the offensive line.