PULLMAN — It feels like any other August on the football practice fields at Washington State, other than the masks coach Nick Rolovich and a few of his assistants wear.

But outside the insular world of the football program, the scrutiny has been far from normal since Rolovich announced July 21 that he had not been vaccinated against COVID-19 and did not plan to get the shot, saying the reason for his decision would remain private.

In doing so, Rolovich went against WSU’s mandate requiring that all university employees and students be vaccinated, but did receive an exemption. The university allows exemptions for staff and faculty for medical, religious or personal reasons. However, the personal reasons exemption will soon be eliminated for students and is under review for faculty and staff members.

The coach’s decision against vaccination looms large as the Cougars, who missed three games due to in-house and opponent COVID-19 issues a year ago, prepare to navigate another season during the pandemic. Outside pressure has mounted following Rolovich’s decision, with calls for the coach to resign or be fired if he does not change his stance.

WSU athletic director Pat Chun, who is vaccinated, made it clear Wednesday that he backs his coach, saying Rolovich is the right person for the job despite their differing views on the vaccine.

Washington State, the first public university in the state to implement a COVID-19 vaccination mandate, announced Thursday that it plans to discontinue personal and philosophical exemptions from its student vaccination requirement once the FDA grants full approval to any of the three vaccines now being used under emergency authorization.

At the University of Washington, President Ana Mari Cauce co-authored a statement Friday to say the university is “working toward aligning” vaccination requirements for students and staff with the state’s mandate to limit exemptions to medical and religious reasons — in other words dropping the personal and philosophical exemptions. Cauce and Provost Mark Richards promised details in the “near future.”

UW Medicine, the School of Dentistry and other “clinical environments” are removing philosophical exemptions from vaccination requirements for employees, following Gov. Jay Inslee’s Monday announcement of a new mandate for state employees and health care workers. 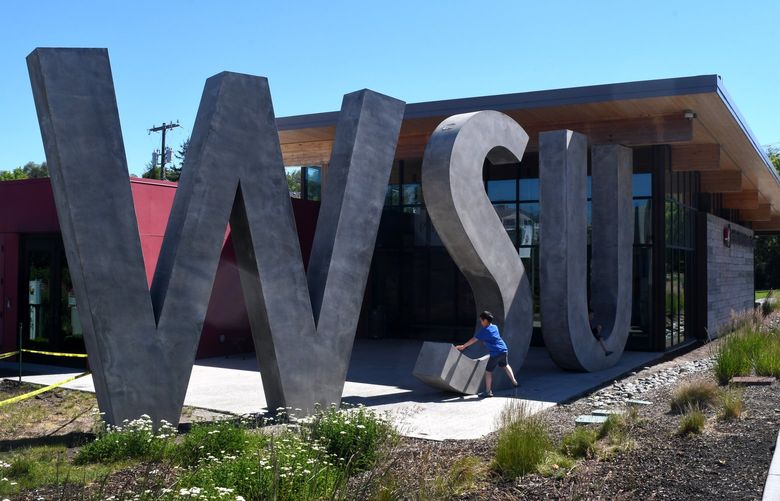 Phil Weiler, WSU vice president for marketing and communications, said the school is also looking at possibly eliminating those exemptions for faculty and staff.

“We’re still doing a legal review, because making it a condition of employment is different — we have a different relationship with employees than we do with students,” Weiler said. “We have requirements in place for students for measles, mumps, rubella (that do not include personal or philosophical exemptions) and those types of vaccines, so adding the COVID-19 vaccine isn’t a stretch, but we are looking at whether we have the authority to do that with employees as well.”

Meanwhile, Chun has urged others to get the vaccine and said he had many long conversations with Rolovich on the topic. Chun certainly hasn’t been surprised by the outcry against his coach. He expected it.

“Nick and I talked it through, and we both knew there would be [an uproar],” Chun said. “Everyone understands this a very political issue with the vaccine. To Nick’s credit, he wanted to be transparent about why he wasn’t going to be there. I care about Nick, he’s a good person — and I understood the second he made that statement, the impact that would have on him personally and professionally. That was a heavy toll that was going to be paid with the announcement.”

Rolovich, who said last month that the reasons for his choice will remain private and added that he won’t comment further on his vaccination status, said this week that he hasn’t paid attention to the backlash. At Pac-12 media day, the coach said he supports vaccination and doesn’t want to be a distraction to his team. Rolovich was not allowed to attend media day because he isn’t vaccinated, and he met with the media via video conference.

“I’m not against vaccinations. I wholeheartedly support those who choose to be vaccinated, including our players, staff, coaches,” he told reporters. “I don’t mean to cause any heartache to this university or this athletic department or this state.”

Rolovich also said at media day that 75% of the WSU football team was vaccinated. Chun on Wednesday said he had no updates on that number or for the athletic department overall.

On Thursday, the Pac-12 announced an updated COVID-19 forfeiture policy, stating that teams unable to play a conference game because of an outbreak must forfeit rather than have the matchup declared a no-contest. Last season, the Cougars missed three games due to COVID-19 issues — two of which were opponent-related.

Rolovich, meanwhile, is undergoing daily coronavirus testing and wears a mask. Chun said Rolovich is adhering to all protocols.

“I feel we have tons of protocols in place, the masks and the testing,” Rolovich said. “I commend the kids because this is not the experience they signed up for.”

“It’s a lot of outside noise and people on the outside not knowing specifics,” Woods said. “You shouldn’t jump to conclusions when you don’t know the reasoning behind it. It’s funny, because it hasn’t impacted the team in a negative way.”

Asked whether Rolovich’s stance might influence players’ decisions, Chun said, “everything is a concern.” But he added, “We have put experts, world-renowned scientists and people they know and trust in front of all of our student-athletes to make sure we are giving them all the right information.”

Inslee on Monday cited a spike of infections driven by unvaccinated people when announcing the vaccine mandate for state and health care workers, with the only exemptions being medical or religious reasons. However, Rolovich, who is the state’s highest-paid employee at $3.2 million annually, and all other higher education employees were not included in the mandate.

This week, Washington state surpassed 500,000 positive cases of the coronavirus, with the recent surge primarily being driven by the highly transmissible delta variant. Health officials have said disease modeling shows the delta variant likely accounts for more than 90% of new coronavirus cases in Washington.

For now, a normal football season with full crowds at Martin Stadium is planned. But for revenue planning purposes, Chun forecast attendance at 50%, “just out of an abundance of caution, so that gives us some breathing room.”

With the delta variant of the coronavirus spreading, it’s impossible to predict what might happen. There’s also worry that Rolovich, his staff or players could be exposed to or contract the coronavirus.

“There is no replacement for Nick, and he needs to be available for every single practice — not just games — as the head coach and the person who runs this precision offense, the run-and-shoot,” Chun said. “That’s why he, and us all, are in strict COVID management. But it could happen, and if it does, we will have to address it appropriately at that time.”

Correction: This story has been updated to reflect the fact that Nick Rolovich said he’s not vaccinated due to “reasons which will remain private,” and not “personal reasons” as previously reported. The article also removed a reference that Rolovich received a personal reasons exemption to WSU’s vaccine mandate.