WSU’s new Air Raid had shown only a few glimpses of its explosive potential through the first two weeks of the season. So, the Cougars were eager to give their supporters a show in their Week 3 matchup with underdog Colorado State.

“We had to be ready to burst out of the gate,” Dickert said. “Our offensive guys came out of the last two games really, really hungry to get better and to show what we’re capable of doing.”

The Cougs’ offense fired on all cylinders during a blazing-hot start on Saturday at Gesa Field. WSU’s Air Raid tallied touchdowns on its first four possessions and the Cougar defense kept CSU off the scoreboard until the late stages of a 38-7 rout. 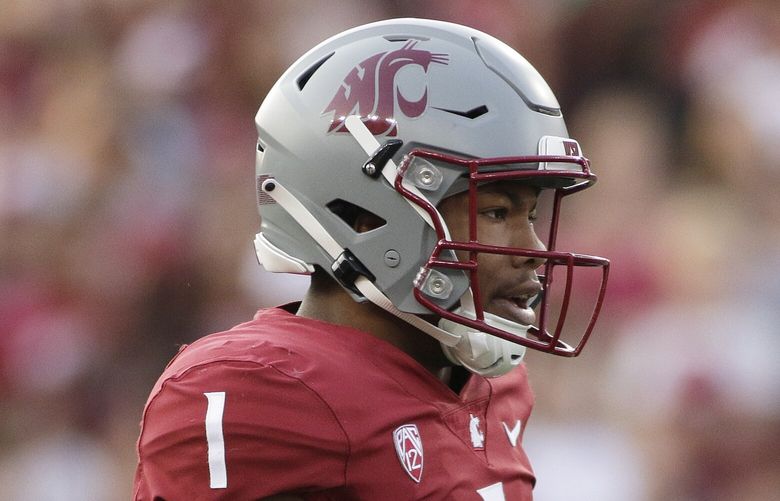 Quarterback Cameron Ward had the finest performance of his young Cougar career. He completed 12 of his first 14 passes and doled out touchdown passes on each of his first four possessions. WSU (3-0) opened a 28-0 lead midway through the second quarter and hit cruise control after halftime.

Ward dazzled in the first half, putting on display the unique skill set that made him one of the top-rated transfer QBs of the last recruiting cycle. He was perhaps most impressive improvisational plays, dodging traffic and distributing precise passes while on the move.

WSU’s first three scoring possessions lasted less than two minutes apiece. Ward hurried his teammates to the line after each play, and the Cougar offense strung together big gainers.

“It was an electric start to the game,” Dickert said. “We want to play with tempo. … We want to keep people off-balance, make sure they can’t sub and wear them down.”

The Rams (0-3) had no answers for WSU’s offense early in the game. CSU’s secondary looked gassed. Coverage lapses were frequent. Cougar pass-catchers often ran free down the field. When windows were tight, Ward delivered accurate passes.

He connected with a wide-open Donovan Ollie for a 17-yard touchdown on WSU’s first series, then capped the ensuing drive with a 13-yard scoring pass to De’Zhaun Stribling, who hauled in a well-placed, over-the-shoulder ball and tapped one toe inbounds to open a 14-0 lead after just five minutes of game time.

“Our chemistry has grown,” Ollie said of the Cougars’ QB and receiving corps. “We know what we’re capable of. These past two weeks, we felt like we had a lot to grow on. That first half was big for our confidence.”

Ward found Stribling again — this time uncovered — late in the first period for a 17-yard TD. Ollie brought in a goal-line reception at the 6:12 mark of the second quarter after WSU had churned out a five-minute drive. Stribling and Ollie, the Cougs’ top two outside receivers, combined for over 150 yards on 12 receptions.

“Don and Strib on those edges gotta be big-body receivers and take the ball down the field, and make plays off the catch,” Dickert said. “I was happy in the first half. We did a good job of playing off-script and we hit some big ones, and found seams off of scrambles.”

The Cougs outgained CSU 255 yards to 82 at intermission. WSU’s offense averaged 8 yards per play in the first half, but slowed its pace and appeared to play conservatively for stretches in the second half — excluding the opening drive of the third frame, a 70-yard possession that ended in a short field goal.

WSU gained just 47 yards on 14 plays over the next four drives before a long, clock-killing possession at the end of the game, which ended with WSU reserve running back Kannon Katzer’s first-career TD. Starting running back Nakia Watson gained 71 of his 74 total yards before the halftime break.

“We still didn’t play a complete game,” Dickert said of WSU’s offense, which got off to slow starts and performed to mixed results in the first two games but made just enough plays to help the Cougars top Idaho and Wisconsin. “We’d like to keep that fire in the second half.

“We’ll look at the first half on offense and say, ‘This is the way we can play when every man does their job, and we put ourselves in a good situation.’ … Then, you see the second half and that is what happens if we don’t.”

The Cougar offense may have lost its groove, but WSU’s defenders never did. The unit, which has had an exceptional start to this season, took advantage of a short-handed CSU offensive line — missing its starting tackles — and tallied seven sacks and five tackles for loss in the run game. CSU came into the game having surrendered an FBS-worst 16 sacks this season.

“I think we did a good job causing disruption,” Dickert said.

“We’re coming with intensity in all phases,” Henley said.

“That was the biggest emphasis we had going into this game,” he continued.

CSU went three-and-out four times and advanced the ball into the red zone on just two drives. Trailing 31-0, the Rams got on the board with a short TD pass early in the fourth quarter.

Their ground game was held to 37 yards on 31 carries. CSU converted 2 of 13 third-down plays as WSU’s defense dialed up effective blitz packages and consistently swarmed toward the ball.

Coming off a grueling win on the road over a ranked Wisconsin team, WSU didn’t overlook a struggling CSU team and completed a sweep of its nonconference slate. The Cougars built on their early-season momentum — and showed their explosive offensive capabilities — could very well be ranked in the AP Top 25 when they open Pac-12 play hosting Oregon next weekend.

“I don’t know how many people expected us to be at this point,” Dickert said, “but it’s a step in our journey of where we want to go.

“I don’t know if there’s a lot of people besides that locker room that thought we could be where we are right now, and that’s a fun place to be. But it’s not the end of the journey. I’m excited for conference play.”