PULLMAN — It’s normally a lesson Jake Dickert preaches to his players. On Saturday, it may have been more applicable to Washington State’s defensive coordinator-turned-interim head coach.

“You’ve just got to make sure you’re ready when that number’s called,” Dickert said. “I’ve learned that life lesson a long time ago and that’s what I believe I’ve been doing, so this day was a microcosm of the work we’ve all put into this.”

Dickert’s number was called at some point Monday afternoon when WSU officially parted ways with Nick Rolovich, who was terminated as the Cougars’ head coach — along with four assistant coaches — for failing to comply with Gov. Jay Inslee’s state COVID-19 vaccine mandate.

A contingency plan that had presumably been in place for some time went into action Monday night when athletic director Pat Chun announced Dickert would assume head coaching duties for at least the rest of the season, until WSU’s administration could launch its next coaching search in earnest.

A chaotic week for Dickert began with Monday’s news and culminated Saturday at Gesa Field, where a resilient effort from the Cougars came up short in a 21-19 loss to BYU, ending WSU’s four-game win streak. 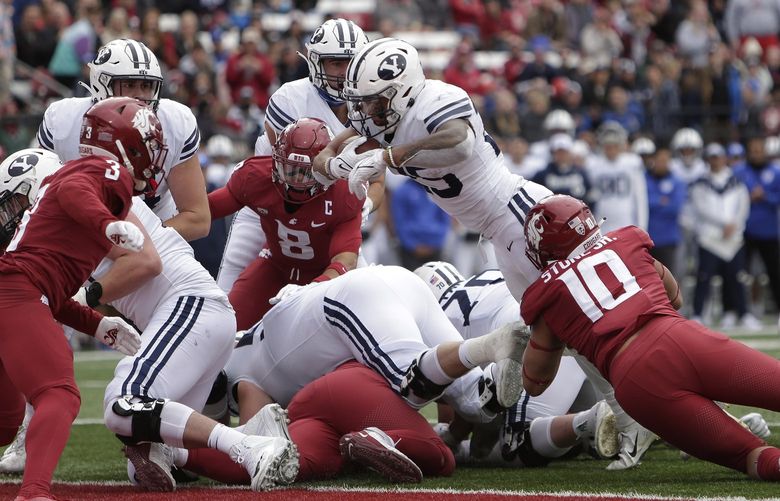 “I know it’s been a tough week,” Dickert said. “I really respect our guys, I’m really proud of our guys for the way they played, but if I knew one thing, they were going to come out here and give everything to their teammates and I think that’s what they did for 60 minutes.”

WSU’s run-and-shoot offense stumbled, scoring fewer than 20 points for the first time in a month, and the Cougar defense that’s still being steered by Dickert as he handles interim coaching duties conceded more than 190 rushing yards and two touchdowns to BYU running back Tyler Allgeier.

There were hiccups from the home team, but few of them, if any, could be traced to the midseason coaching shake-ups that WSU endured earlier in the week, or the distractions that may have come with.

“To me, we went in as a staff, we went in as a team and we knew we weren’t going to let anything we did as a staff affect the players,” Dickert said. “I thought that part of it was really smooth. Even in a hectic week of getting staff in late, we spend a lot of time to make sure our communication was the best so we could put our players in the best position to make plays today. I felt like we did that. It’s going to be a learning experience as we keep going through it.”

WSU’s coaching reinforcements, Dan Morrison (quarterbacks) and Dennis McKnight (offensive line), came in midway through the week but were only able to observe practices until their employment was cleared by the university on Friday. The Cougars usually hold a non-padded walk-through on Friday, so Morrison and McKnight won’t begin to work with players until the team practices on Monday.

Morrison and McKnight are veteran coaches with a deep understanding of the run-and-shoot offense, simplifying their respective moves to Pullman. Jordan Malone and Dan Ferrigno were analysts for Rolovich’s staff before being elevated into full-time assistant coaching positions this week, and have the benefit of knowing both the personnel and systems in place at WSU.

“There’s no time to ease them in. It’s time to go. These guys we brought in, they know the system. It’s getting them cleaned up with the language,” Dickert said. “… This will really be their first week to get their hands dirty and coach the kids on the field and to do all those things. … But there’s no time to waste, we’ve just got to hit the ground running and they’re kind of drinking through a fire hose and catching everything they can and doing the best they can for our guys.”

Cougar players also seemed to think a turbulent week off the field had little to no impact on Saturday’s two-point loss.

“Nothing different, just business as usual for the most part,” sixth-year senior linebacker Justus Rogers said. “I think we all had an understanding going into the week. No matter what happens, we’ve had a lot of adversity with my time being here and I think we’ve done a good job of leaning on each other and pushing through week to week.”

Asked about his head coaching debut, Dickert was able to set the result against BYU aside when putting the moment in context.

“It was one of those things, I’ve got a lot of people in my life that told me to just take a breath, enjoy it, smile,” he said. “It was quite a moments, one that I’ll never forget. I’ll never forget it. I can’t wait to hug my wife and see my three kids and share that moment with them, too.”