PULLMAN — Three years ago, Jay Norvell signed off on Daiyan Henley’s move to the defensive side of the ball at the University of Nevada.

It’s understandable if Norvell, now the first-year coach at Colorado State, was second-guessing that decision at certain points of Saturday’s 38-7 loss to Henley’s Washington State team at Gesa Field.

“I don’t think he’s that selfish,” Henley laughed after another turning in another impactful performance for the Cougars’ defense. “I think he’s happy he helped me out to further my career, for sure.” 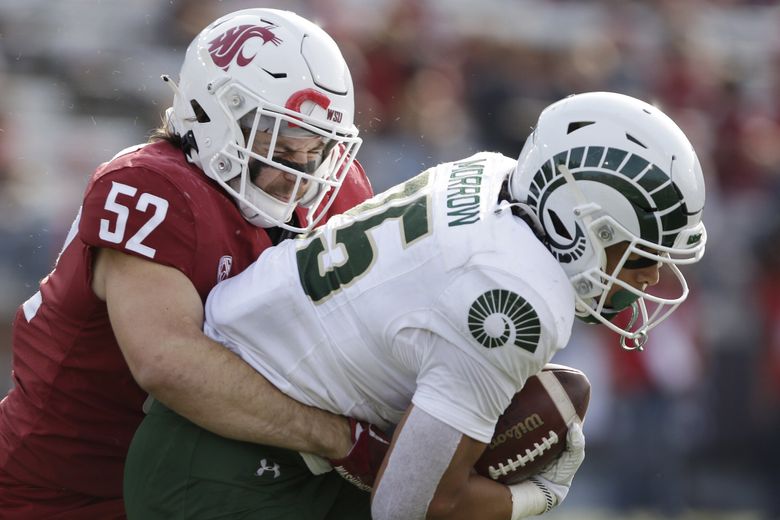 Once an outside receiver for Norvell’s Wolf Pack, Henley has been the most productive member of Jake Dickert’s defense through the first three games of WSU’s season, and there was no letdown against his former coach and the only man to offer him a FBS scholarship out of Los Angeles’ Crenshaw High.

The sixth-year linebacker recorded a career-high 13 tackles, notched a career-high three sacks and forced two fumbles for a WSU team that held CSU scoreless through nearly 50 minutes of Saturday’s game.

Henley grew close to Norvell at Nevada, but also a handful of CSU players and coaches who made the move from Reno to Fort Collins, Colorado, with the veteran coach. Nevada strength coach Jordon Simmons is now with the Rams and CSU’s roster lists 11 Nevada transfers.

“I know he felt it. I had to make sure they felt it,” Henley said. “I need to let these dudes know that playing with me is different than playing against me. So that was big for me.”

From WSU’s “Will” linebacker position, Henley has registered 30 tackles in three games and Saturday’s totals bumped his season tackles-for-loss total to 7½. He also takes credit for four of the Cougars’ 14 team sacks. In Saturday’s game, WSU punished CSU quarterback Clay Millen, the son of former Husky quarterback Hugh Millen who played at Mount Si, for seven total sacks, bringing their team total to 15 in only three games.

“I would say this, there’s a lot of emotions for Daiyan and I was nervous coming into the game,” Dickert said. “But he did a good job of handling those. I’ve been saying this since I’ve seen him and I’ve seen some high-level linebackers. He’s the most athletic I’ve been around and when he plays within himself, making the plays that are there, and I think coach (Brian) Ward is doing a good job in getting them in great situations to rush the passer, which he excels at.

“When we get a one-on-one for Daiyan, look out.”

Henley disrupted CSU’s final play in the first half — a fourth-and-3 attempt with 10 seconds remaining that saw the linebacker bulldoze through the Rams’ offensive line and jar the ball loose as he took Millen to the ground. Francisco Mauigoa recovered the fumble to preserve a 28-0 WSU lead at halftime.

“He shows juice every play,” WSU safety Jaden Hicks said. “Playing with him, it’s a really fun experience and he’s an older guy. He’s always teaching me, talking me through the plays, so it’s a really good connection with everybody.”

Henley was in the middle of a near-turnover late in the fourth quarter, sacking Millen on WSU’s 16-yard line and forcing another loose ball. The Cougars weren’t able to recover the fumble before CSU’s Justus Ross-Simmons jumped out, but the play lost three yard and WSU’s defense held strong on fourth down, causing a turnover on downs.

WSU’s defense was intent on pressuring Millen from start to finish. The Rams conceded an FBS-high 16 sacks through their first two games against Michigan and Middle Tennessee State.

“Before the game I told RJ (Stone), I told Brennan (Jackson), I told Quinn (Roff), I said ‘Hey man, we’ve been watching film all week and these guys get hit,’” Henley said. “I was like, ‘Please save some sacks for me.’”

It didn’t seem to be an issue for Henley, who spent more time as a coverage linebacker and recorded his first sack in the season opener against Idaho. Henley’s four sacks are a team-high.

“Now they’re mad at me, telling me that I didn’t live up to my word,” Henley said. “It’s all right, it happens, but I’m just happy we got that many sacks. Hopefully we get more.”

Henley received words of encouragement before and after the game from Norvell, who was acutely aware of the numbers his ex-linebacker had piled up in wins over Idaho and No. 19 Wisconsin.

“He was just like, ‘You look good, you look like you got bigger,’” Henley said. “I said, ‘I hope I did because who can I hit being small?’ After the game he said, ‘Just keep doing you, you’re doing a great job and you’ve got to keep elevating.’

“… I appreciate that man, for sure. Words like that just let me know I have someone in my corner, another coach in my corner that has my back and that’s watching me along the way.”