PULLMAN — Washington State tackle Abraham Lucas related his team’s performance to that of a “sad fighter.”

Lucas was matter of fact after the Cougars’ Pac-12 flop against the Trojans of USC, who scored 38 unanswered points in the second half en route to a 45-14 rout.

In examining how the contest played out, Lucas broke it down using terminology that’d be familiar to a mixed martial artist. 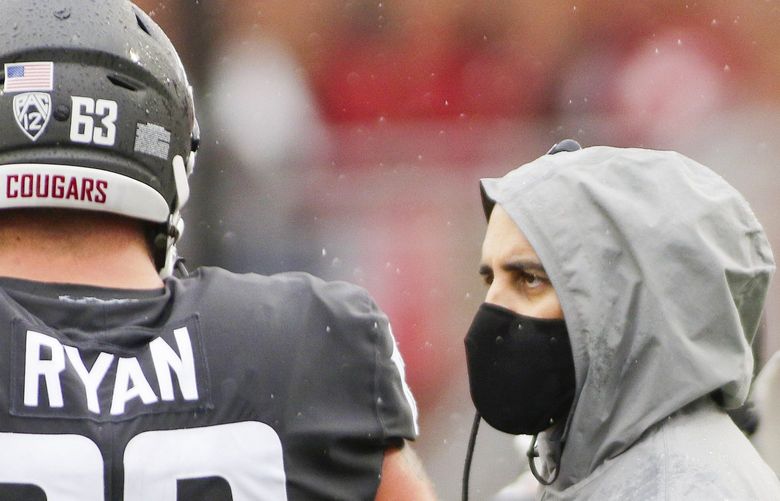 ‘I have to look at myself’: For fourth time under Nick Rolovich, WSU loses after building double-digit lead

“I’ll compare it to UFC. I think we’re a team that, we have a good initial punch, but not really a chin,” Lucas said. “And we don’t have a lot of stamina for later on.”

WSU (1-2, 0-1 Pac-12) absorbed a string of blows Saturday at a rainy Martin Stadium — the first of which was landed by USC late in the second quarter — and crumbled.

The Cougars were well in control of their bout with the Trojans (2-1, 1-1) for about 27 minutes of game time.

USC was playing for the first time under interim coach Donte Williams, who replaced Clay Helton after he was fired Monday. The Trojans’ veteran quarterback, Kedon Slovis, was injured on his team’s third play from scrimmage, and true freshman reserve Jaxson Dart couldn’t find his footing early in his career debut.

The Trojans were on the ropes initially, perhaps discombobulated by their change of management. But they settled in.

“Tense? Not at all,” said Williams, USC’s first Black head coach in program history. “Every play, every time something happened, they were saying we got you. There was never anybody down.

“In the first half, we were pressing. Guys wanted to play so hard for each other, for me, that some mistakes were getting made.”

The Cougars’ legs began to wobble late in the second quarter.

And the hosts were all but out cold by the time the third period wrapped up.

“You come out in a fight, you hit them a couple of times and it’s great and everything’s ‘rah rah,’ and then you get hit and you just fold,” Lucas said, “that’s like the mark of a sad fighter.”

It’s not so simple to put a finger on the play or circumstance that rocked the Cougars most. The hits added up.

Most will probably point to WSU’s quarterback situation as its most aggravating setback. Sophomore Jayden de Laura, who’d spent the first two quarters picking apart a USC defense that was often out of position, emerged from the locker room after halftime with a bulky brace on his left leg.

He was still suited in pads, but WSU coach Nick Rolovich opted to send in sophomore walk-on Victor Gabalis, rather than junior Cammon Cooper.

Rolovich said de Laura got “banged up” in the first half. He didn’t specify why Gabalis was selected to take over, but indicated that the Everett native and Cooper are “really close” for the backup role. Cooper played one series in garbage time.

“I don’t think we were conservative, we were just ineffective,” Rolovich said of Gabalis’ first couple of drives. “I’m not sure it all falls on Victor’s shoulders.”

On his third drive — which began backed up against his own goal line after an Armani Marsh pick — Gabalis was crunched from behind by USC’s Drake Jackson. He fumbled in the end zone, and the Trojans recovered to balloon their lead to 28-14.

De Laura, who passed 10 of 17 for 117 yards and two scores in the first half, gave Rolovich the thumbs up, that he was all right to re-enter for the following series. On his first play back, de Laura heaved a pass deep down the far sideline toward Jackson and was intercepted by Calen Bullock.

The Trojans gained 172 yards and piled up 28 points in the third quarter. WSU lost 2 yards, and missed out on one drive after Travell Harris fumbled on a kick return.

“They (the defenders) were on the field too many plays,” Rolovich said. “This is a team game. Everyone needs to do their job and carry some of the weight, and we had lapses on all three sides I’d say.”

WSU squandered a goal-line opportunity early in the second quarter. The Cougars had the ball at the 1 on first-and-goal, yet ultimately turned it over on downs after three stuffed running plays and a dropped touchdown by Calvin Jackson Jr. — who otherwise dazzled in the first half with nearly 100 yards.

“We played a good team that made some plays and didn’t take advantage of the opportunities we had, especially in the first half,” Rolovich said. “The fourth-down stop down there was definitely one I think could have changed the game.”

Still, they found themselves up 14-0 at the 6:13 mark of the second frame when standout slot receiver Travell Harris hauled in his second touchdown grab of the day from de Laura, who seemed like he could do no wrong. The Hawaiian was in-tune with his pass-catchers, and changing plays at the line with confidence.

The Cougars had limited USC to just 95 yards over four possessions before the visitors’ momentum-shifting 11-play, 93-yard series. Dart, a Utah native and the 2020 Gatorade National Player of the Year, got grooving with a blend of short, outside passes and simple zone rushes.

The Trojans dialed up a gutty shot on fourth-and-9. Dart connected with Gary Bryant Jr. for a 38-yard score with under a minute until intermission.

Somebody in WSU’s secondary missed an assignment, leaving linebacker Justus Rogers all alone to cover Bryant.

A potential 21-0 Cougar advantage at the half was suddenly a seven-point lead. The Trojans’ defense smelled blood in the water, and their rookie quarterback was beginning to feel it.

Dart, who fought through what appeared to be a leg injury suffered early on, totaled four touchdowns and 391 yards on 30-of-46 passing against two interceptions — WSU safety Daniel Isom recorded a pick on Dart’s first possession.

“I think those moments, it always hits you when you’re least expecting it,” Dart said. “Really, I was just trying to lock in, don’t let my emotions get the best of me, stay in the moment.”

The Cougars piled up 192 yards over their first three possessions alone, including 65 of their 99 total rushing yards. From 5:26 in the second quarter onward, WSU mustered only 87 yards, 55 of which came on Cooper’s inconsequential series in the final minutes.

“In that game, we were a 30-minute football team,” Lucas said. “We came out swinging, had them on the ropes, had them where we wanted them. … We came out and tried to put them away as much as we could, then the next half, it was just gone.”