There are many questions concerning the Washington State football team heading into Saturday night’s season opener against Utah State, including who will be the starting quarterback and whether the defense will be better — much better? — than it was last season.

But there is no question at right tackle, and there hasn’t been since Abraham Lucas — a mountain of a man — took over as the starter at that position as a redshirt freshman in 2018.

The 6-foot-7, 319-pound Lucas, from Archbishop Murphy High School in Everett, has started 30 straight games and anchors a veteran line. That unit will be expected to open big holes for the running backs, but also keep the quarterback — whether it’s sophomore Jayden de Laura or graduate transfer Jarrett Guarantano — out of harm’s way.

You can count on Lucas, a three-time second-team All-Pac-12 selection, to do his job.

What to watch for when WSU hosts Utah State

“I would say so, as far as natural ability, desire, his focus — he’s a very centered young man,” WSU coach Nick Rolovich said, when asked if Lucas was the best offensive tackle he has coached. “He’s an incredible talent, and a lot of people want to come see him, because he’s different.”

In a good way, of course.

It certainly wasn’t a given that Lucas would get this big and this good coming out of Archbishop Murphy, when he weighed 259 pounds and was a football and basketball star.

Lucas was a three-star recruit, and he said he had five scholarship offers, with Washington not among those offering 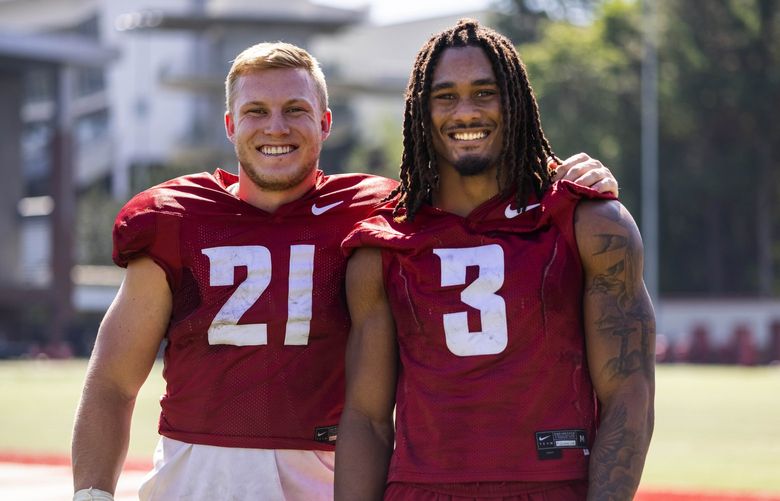 “Washington State was my best option,” Lucas said. “I just liked it here.”

It has worked out well for both player and school.

Lucas spent his first year at WSU as a redshirt, and transformed his body, adding 60 pounds — most of it muscle.

“I followed directions, did what I was supposed to, and (the pounds) all came on,” Lucas said. “Oddly enough, what the coaches said worked.”

Lucas said weightlifting and eating more made the difference.

“I had never been to a place where you could get boxes and boxes of food,” he said. “That helped. And then, I wasn’t a huge fan of weightlifting in high school, but then I started to see my body transform (when he did at WSU), and I loved lifting. I got the motivation when I saw my body change and the pounds came on that much faster.”

Lucas had a big decision to make during the offseason: whether or not to enter the NFL draft.

“It was a good problem to have, but it wasn’t too hard of a decision,” he said. “There are obviously still some physical things you can improve on as far as technique, but it’s really shoptalk stuff for me. I want to be better able to answer (NFL teams’) questions and understand formations.”

Lucas became known for his pass blocking under former coach Mike Leach’s Air Raid, but said he also enjoys blocking on runs. He has high standards for himself on both.

Most always, he has met those standards. As for the team, he said during fall camp that getting in the normal time to prepare has been huge for the offense.

“COVID really screwed up everything last year,” he said. “We did have some success, which is a good thing, because now that we are learning the (run-and-shoot) offense more, it will be that much more effective. I’m hoping it will all come together, and I am hoping we are on the right path to it.”

Saturday, the answers will start to come.