Could Washington State bring back an old defensive coordinator to succeed Mike Leach? Will the Cougars scour Leach’s Air Raid coaching tree to hire their next football coach? Or will athletic director Pat Chun go in a completely different direction? 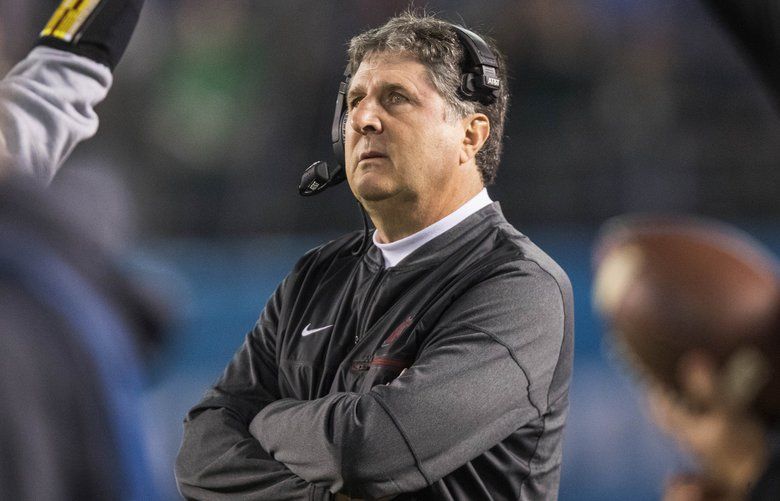 After eight seasons on the Palouse, Leach is officially out as Washington State’s coach, accepting a position Thursday to coach Mississippi State. The next step for Chun is replacing someone who leaves Pullman as the third-winningest coach in program history.

We rate 10 potential candidates to replace Leach at WSU on a 1-5 scale, with five being most likely and one being least likely.

Why it makes sense: First and foremost, because Grinch is familiar with WSU and had mounds of success in Pullman as Leach’s defensive coordinator. The Cougars were allowing 46.3 points per game the year before he came and gave up just 25.8 in his final season as WSU’s DC. Grinch has already had a taste of major Power Five football, at Ohio State and Oklahoma the last two seasons, and even after his defense was bombed by Joe Burrow and LSU in the College Football Playoff, he has the Sooners’ long-maligned defense trending in the right direction.

Likeliness: 4. Grinch surely wants to be a head coach at some point and FootballScoop.com has reported he’ll be on the Cougars’ short list, potentially with designs on bringing Ken Wilson back as  DC and Jim Mastro as OC. But he’d have to leave a great situation in Norman first.

Why it makes sense: From a regional standpoint, Harsin might be a good fit. The sixth-year Boise State coach has had success recruiting in the Pacific Northwest and to a greater extent in California, where the Cougars have gone for many of their skill players throughout the years. Harsin’s Boise State teams have usually held their own against Pac-12 opponents and the coach was 1-1 against the Cougars, beating them in 2016 at Albertsons Stadium before losing in three overtimes a year later at Martin Stadium.

Likeliness: 3. Is WSU a better job – or, a significantly better job – than the one Harsin currently owns? It probably depends on who you ask. But it’s somewhat notable that Leach made $3.75 million annually, while Harsin was at just $1.75 million this season.

Why it makes sense: McElwain’s had 10 different gigs since, but the former Eastern Washington quarterback started his career as a QB/WR coach in nearby Cheney, and a Power Five coaching job might be the thing to lure him back to the Inland Northwest. Amid controversy, McElwain’s only other P-5 gig, at Florida, didn’t last long, although the coach has rebounded at Central Michigan.

Likeliness: 3. Some would consider McElwain a risk based on his tenure in Gainesville, but the Missoula native’s ties to the region make him an intriguing fit. You’d assume McElwain, at the very least, would take a phone call from Chun and the Cougars.

Why it makes sense: A variety of Leach’s pupils will be thrown out as candidates to replace the 58-year-old in Pullman, but none is more familiar with WSU than Harrell, who coached the Cougars’ outside receivers for two seasons in 2014 and ’15 before leaving to be an offensive coordinator at North Texas. Despite reports that Harrell and/or Clay Helton would not return to USC next season, both have since committed to spending 2020 with the Trojans, though the opening at WSU could persuade Harrell otherwise.

Likeliness: 3. By all accounts, Harrell, at 34 years old, has enough experience to make the next step in his career and the Trojans put up impressive numbers – 32.5-points-per-game impressive – with him calling the plays last season.

Why it makes sense: One way to keep Hawaiian quarterback signee Jayden de Laura on board could be to hire the coach in his home state. Rolovich is well-liked and he’s had success transforming the Rainbow Warriors into a Mountain West contender, leading them to an 18-11 mark the past two seasons after just three wins in 2017. His 2019 team ranked 13th nationally in total offense and 24th in scoring offense.

Advertising
Likeliness: 2. Rolovich has Hawaii – excuse the pun here – rolling after four seasons, and I’d imagine it’s hard to leave the warm shores of Honolulu for the frozen hills of Pullman. Nonetheless, he’s someone to keep an eye on if the Cougars are looking to hire someone with prior head-coaching experience.

Why it makes sense: The second of three Air Raid disciples we’ll offer up, Littrell is still relatively young at 41 years old and has a solid understanding of the offensive gospel that’s been preached in Pullman over the last eight years. Littrell played running back for Leach at Oklahoma and coached the position at Texas Tech in 2005-08. His UNT teams won 23 games from 2016-18 before dropping to 4-8 this season.

Likeliness: 3. If Chun is targeting someone with an Air Raid background, as well as a head-coaching background, Littrell would fit like a glove. He was also responsible for developing Mason Fine, who threw for 12,237 yards and 91 touchdowns in four seasons at North Texas.

Why it makes sense: If the Cougars wanted to go in a completely different direction with their offense, they might consider Bohl, who’s best known for a historic tenure at FCS North Dakota State, which rattled off three straight national championships before the coach was hired at Wyoming. The Cowboys won six games in his first two seasons, but haven’t won fewer than six since and have gone to bowl games in three of the last four years.

Likeliness: 3. Bohl has certainly put his time in at Wyoming and generally as a college football coach. At 61 years old, his age could scare a few schools away, but it’s hard to imagine Bohl not succeeding in the Pac-12. In 17 years as a head coach, Bohl’s had only three losing seasons.

Why it makes sense: WSU fans best know Dykes as the coach who led California to a 60-59 win over WSU in Pullman after Jared Goff and Connor Halliday combined to throw for 1,261 passing yards. Dykes’ 2019 Southern Methodist team won 10 games before losing to Lane Kiffin and Florida Atlantic in the Boca Raton Bowl. Running the offense he learned as a wide-receivers coach under Leach at Texas Tech, Dykes had the nation’s seventh-best offense in 2019, at 41.8 ppg.

Likeliness: 2. Dykes already had one stint in the Pac-12, and it wasn’t successful. His Cal program went 19-30 in four seasons – largely because the Golden Bears couldn’t stop anyone – but Dykes does deserve credit for developing Goff and convincing Davis Webb to transfer to Berkeley.

Why it makes sense: In so many ways, it doesn’t, but this wouldn’t be a legitimate list if we didn’t offer up at least one not-so-serious candidate, right? Sarkisian does deserve praise for the work he’s done with Tua Tagovailoa, who was tutored by the Alabama OC in 2016 and again when “Sark” returned to help out Nick Saban this season, and we can assume he’d be able to maintain a somewhat potent offense in Pullman. The Crimson Tide offense was among the nation’s best this season, at 47.2 ppg.

Likeliness: 1. It’s been five years since Sarkisian was last a head coach, and his problems away from the football field would raise questions among fans and boosters as to whether he’d be able to lead a Pac-12 program after mixed success at Washington and USC.

Why it makes sense: Former Eastern Washington and Oregon quarterback Vernon Adams advocated for his old coach on Twitter, and Baldwin’s success in Cheney is hard to overlook. But, more recently, he struggled to recruit or develop a solid quarterback at Cal and the Golden Bears’ offense scored 30-plus points just twice this season – against WSU in Berkeley and against Illinois in the Foster Farms Bowl.

Likeliness: 1. Could Baldwin ditch Cal Poly before coaching a game in San Luis Obispo? Legally, sure. Morally, maybe not. Also, Paul Wulff’s time in Pullman would be a good reason not to go back down the EWU well for a head coach.

Note: This story has been updated to reflect that Jim McElwain is the coach at Central Michigan, not Eastern Michigan as originally reported.