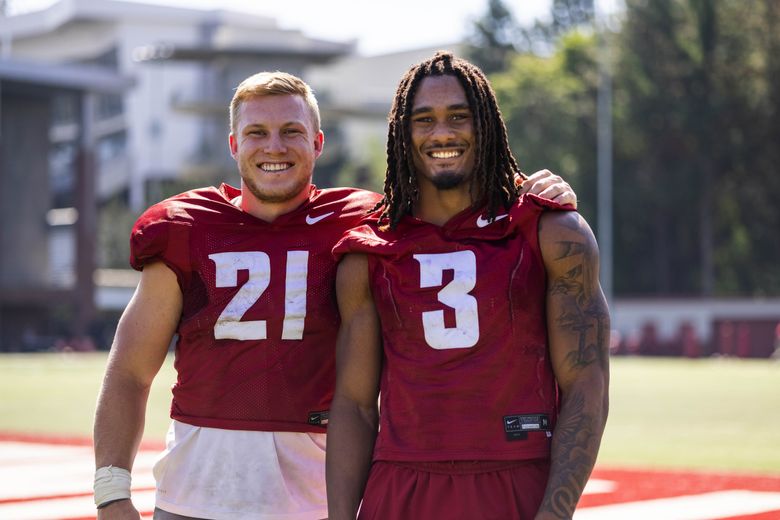 A Washington State offense led by its running backs? Are you sure you have the right university?

For years, running the football has been an afterthought, particularly during Mike Leach’s eight-year stint as coach when running plays were almost never called – and only happened when the quarterback audibled to a running play.

But this year will look a lot different. WSU brings back one of the best running back duos in the country in Max Borghi and Deon McIntosh, and Cougar coach Nick Rolovich says he’ll feed the talented tailbacks often.

“The running game is the most underrated piece of our (run-and-shoot) offense,” said Rolovich, who will also try to find carries for Nakia Watson. “We want to get 150 yards from our running backs – whether that’s running or catching passes. That’s kind of the barometer.”

Borghi and McIntosh have higher aspirations.

Said Borghi: “Combined, 2K (yards). I know we can do it. We just need the opportunity.”

Graduate transfer quarterback Jarrett Guarantano agrees. He spent the past five years at Tennessee and watched some great running backs in the SEC. He said WSU’s duo would do just fine in that powerful conference, too.

“I think they would kick (expletive) anywhere, honestly,” Guarantano said.

But will there be enough handoffs to keep the running backs happy? In the run-and-shoot offense, the answer is likely a resounding yes.

“There is at least double the runs (in the run-and-shoot offense) than the Air Raid so we can’t complain,” Borghi said. “Obviously, at the end of the day, it’s all about the team and whatever it takes to win. If it takes us to run the ball more, we will be even more happy. If it takes to throw the ball more, then whatever. We just want to win.”

Back for a big finish

Max Borghi arrived in Pullman in January 2018 with big expectations, having concluded a great high-school career at Pomona High School in Arvada, Colorado.

Borghi was Colorado’s 5A player of the year as a senior after rushing for 1,690 yards and 27 touchdowns and leading his team to a state title. In the state championship game, he rushed for 247 yards and three touchdowns.

It’s safe to say that Borghi exceeded the high expectations at WSU in his first two seasons, rushing for 1,183 yards (6.0 per yards per carry), catching 139 passes for 971 yards and scoring 28 total touchdowns.

Then came 2020, when the team played just four games, and Borghi in only one of those (rushing for 95 yards on 10 carries) because of a back injury. Although Borghi was eligible to enter the NFL draft and makes no secret about wanting to play at the next level, it was not the finish he wanted.

Cougar fans got the great news in January that Borghi was returning, to “be the best running back in the country,” as he later claimed.

One of Borghi’s biggest fans is McIntosh.

“He runs physical, he runs hard, he runs low and protects the ball,” McIntosh said. “He’s a leader. He tries to do everything right and limit the mistakes. He leads by example every day. Everyday he comes in to work.”

Borghi, 5-feet-10 and 205 pounds, has often been compared to another running back from Colorado, former Stanford and current Carolina Panthers star Christian McCaffrey. Borghi has known McCaffrey’s family for a long time and the two have done some training together at a performance center.

“I think our games are similar in aspects,” Borghi said. “We are both versatile running backs in that we can catch the ball and run the ball. I think I am a little quicker than him and I think he is a little bit more elusive than I am. So we are a little different in those aspects. I think I have a little more top-end speed and he has more elusivity.”

Borghi made similar comparisons between himself and McIntosh. Borghi said catching so many passes in Leach’s offense should make both more valuable to NFL teams.

“Look at the running backs in the NFL now and it is transitioning to guys who catch the ball,” Borghi said. “Look at McCaffrey, (Alvin) Kamara, Austin Ekeler. All those are do-it-all backs. I think getting film under Leach’s system was helpful for both of us because we can prove we can catch the ball and that we are more than just a ground-and-pound running back because we can run and we can catch.”

Borghi, the only player in the country named to both the Doak Walker Award (top college running back) and Biletnikoff Award (top college receiver) preseason watch lists, is making some money as a Cougar, thanks to the new NCAA rules regarding name, image and likeness compensation.

Borghi hired a marketing person and said he is making “good money.” He plans to take the starting offensive linemen out to dinner after Cougar victories.

“It is cool and all but the focus is football and having a great season because I have aspirations beyond college,” Borghi said.

And sharing some of the workload with McIntosh? That’s fine with Borghi.

“I think this season is going to be a big one, having both of us spelling for each other, and we’re both capable of doing big things with big dreams,” Borghi said. “We’re going to ball out together and hopefully have one last ride together that will be special.”

McIntosh gets his chance

With Borghi out with the back injury in WSU’s first three games last year, McIntosh took over as the starter and boy did he deliver.

In WSU’s season-opening win over Oregon State, McIntosh rushed for a career-high 147 yards, the most for a Cougar running back since Dwight Tardy rushed for 214 yards against UCLA in 2007. He proved that was no fluke, rushing for 92 yards against Oregon and for 65 yards against USC on 10 carries before playing a lesser role when Borghi returned for a game.

“It was fun,” said McIntosh, who rushed for 323 yards last season and averaged 6.2 yards per carry. “My main thing was getting my foot in the door. Everyone knew Max is the guy and Max is the man, and when my name was called, I wanted to be ready. I stayed focused mentally and physically, on and off the field. In games, I know what I can do.”

That’s because he has done it before. He was the 18th-ranked running back by Rivals coming out of Cardinal Gibbons High School in Pompano Beach, Florida, in 2016, and signed with Notre Dame.

He showed great promise with the Fighting Irish as a redshirt freshman in 2017, rushing for 368 yards — with a high of 124 against North Carolina – and averaged 5.7 yards per carry.

But McIntosh was suspended for breaking team rules before Notre Dame’s bowl game and was dismissed from the team a few weeks later.

“My high school coach had a good relationship with coach (Mike) Leach and that got me in the door,” he said. “I knew it was the Pac-12 and I wanted to come here and dominate. That was my motivating goal.”

McIntosh was familiar with the Air Raid offense, having played in that system in high school, but he didn’t get a lot of opportunities as a junior with the Cougars. He rushed for 111 yards (6.9 yards per carry), caught 17 passes for 113 yards and started with Borghi in one game.

It wasn’t until Borghi’s absence that Cougar fans got a true picture of what McIntosh could do,

“I wasn’t surprised, because I knew what Dion’s capable of,” Borghi said. “He’s a stud. He’s someone who can do it all. He can catch the ball, he can run the ball, he can make guys miss. He’s a weapon at any aspect. … He’s a real good lateral runner and he can always make the first guy miss. Obviously, he’s a guy who can rally the team and he’s a leader as well.”

Rolovich said he didn’t realize how powerful a runner McIntosh was until he watched him in games. He isn’t huge at 6 feet, 200 pounds, but he is hard to bring down.

“Deon has a real toughness to his running style,” Rolovich said. “His balance and his contact courage are at a high level. I didn’t realize until we would watch the film, how many times the first guy couldn’t bring him down.”

McIntosh comes from a football family. His older brother RJ is a NFL defensive lineman with the New Orleans Saints, and younger brother Kenneth is a running back at Georgia. Deon said he keeps close contact with Kenneth and follows what he is doing at Georgia.

The two brothers might have been teammates. Deon said Georgia offered him a scholarship as a cornerback.

It certainly turned out well for the Cougars that he didn’t.

‘Whatever it takes to win‘

Rolovich doesn’t have a number for the amount of carries the running backs will get. He said that will depend some on how the quarterback is playing.

“Whatever it takes to win,” Rolovich said.

“Put us in a position to make plays, and get us in open space, whether it’s running or catching the ball,” McIntosh said.

Said Borghi: “A touch is a touch at the end of the day. Any opportunity to get some yards and make plays.”

Borghi and McIntosh said there is great camaraderie among the running backs, and they like what they have seen from the whole team.

Borghi and McIntosh said there is great camaraderie among the running backs, and they like what they have seen from the whole team. Borghi said this can be better than the 11-2 team in 2018 that he played on, saying this squad has more talent.

“Obviously, there are a lot of steps to become a great team like that,” Borghi said. “It’s not just talent. It’s leadership and hard work.”

Those are two things that Washington State is counting on from their two senior running backs. They are determined to make their last season in Pullman special.

“We know what we are capable of, and we’ve been working super hard in the offseason,” Borghi said. “We know this is a big year for both of us. We just need opportunities. And when we get that opportunity, we are both going to go out there and make it happen.”