Editor’s note: This story was published prior to WSU’s game against Stanford getting canceled due to COVID-19. Here’s the latest on the situation.

The week began with the Washington State football team trying to recover from a tough defeat, and will end with the Cougars having to play without their budding star at quarterback, true freshman Jayden de Laura.

De Laura tested positive for COVID-19, according to the Spokesman-Review, which cited multiple sources. So he will not be available Saturday night at Stanford, which didn’t have its quarterback, Davis Mills, in a season-opening loss because of COVID-19 protocol.

Redshirt freshman Gunner Cruz, part of a three-way battle with de Laura and Cammon Cooper this fall to be the No. 1 quarterback for WSU, is expected to start Saturday, according to the Spokesman-Review. 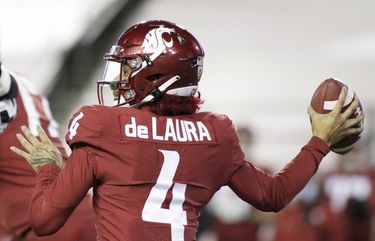 The 6-foot-5 Cruz threw for 9,383 yards in three seasons at Casteel High School outside of Phoenix and will be taking his first collegiate snap. He will be facing a Stanford team that is 0-2 for the first time since the 2006 season.

Washington State (1-1), meanwhile, is coming off a tough 43-29 loss to Oregon, a game it seemingly was in control of until a late lapse in the opening half.

The ability to rebound from disappointment should play a role in who wins Saturday night’s matchup between the two teams at Stanford Stadium.

“We can’t let Oregon beat us twice,” Washington State coach Nick Rolovich said Tuesday after watching a practice he wasn’t impressed with. “I think there was a little bit of a hangover today, and we’ve got to get rid of that and get ready for Stanford.

“We had a real chance to win that game (at Oregon), and my job, and the rest of the coaches’ job is to get them out of that funk. It’s not that (Tuesday’s practice) was terrible, but it wasn’t the same energy that I remember being around at practice. I just felt like we were going through the motions on offense and that’s not going to win games.”

Flushing what happened to the Cougars on Saturday night seems easier said than done. Washington State took a 19-7 lead on a 49-yard field goal with 24 seconds left in the first half, taking complete control after Oregon scored on the first possession of the game.

That is when disaster struck for WSU. Oregon returned the kickoff to its 40, leaving 18 seconds left in the half. That proved to be plenty of time when an Oregon receiver inexplicably got well behind the WSU secondary for a 57-yard gain. The Ducks scored on a 3-yard run the next play.

That turned the momentum, and the Cougar defense was never the same the rest of the game, with Oregon marching up and down the field in the second half.

“I take full responsibility for it, and I’ve got to put our guys in better situations to have success there,” WSU defensive coordinator Jake Dickert said earlier this week about allowing the late first-half drive. “Eighteen seconds left, there is no excuse for it. I look myself in the mirror every day and I grade myself just as much as I grade the players, and there is no excuse for letting that happen right before the end of the half.”

Dickert and the defense will need to move on from that disappointment.

Stanford opened the season with a 35-14 loss to Oregon, but was without three key players, including Mills, because of COVID-19 protocol (it was later determined the individual they were exposed to had received a false positive test).

“I believe they still want to be able to run the ball — and that would be their main identity, but they are more than capable of throwing the ball and scoring points and moving the ball that way,” Rolovich said.

Among the Cougars who will be trying to stop Stanford is true freshman safety Ayden Hector from Eastside Catholic in Sammamish, who walked on to WSU this fall after having his scholarship offer to Stanford revoked.

Hector was named Pac-12 freshman of the week after intercepting a pass and recovering two fumbles against Oregon.

The WSU offense will apparently be again without star running back Max Borghi. Rolovich said earlier this week he didn’t know if Borghi would return this season, adding, “we’ll see how long the season goes.”

Regardless, the Cougars need to move past last week. And now they will have to do it without de Laura.

“I think they felt like they were a team of destiny and it didn’t turn out that way for them against Oregon and I think it was a little shocking for them,” said Rolovich, who has not been available for comment since the news about de Laura broke.

The coach hopes the effort is at the level it was for the first two games.

“I’ve gotten compliments from the other staffs about how hard these guys are playing, and that’s a compliment to them, especially with what’s gone this year, to play hard for each other,” Rolovich said. “That makes me feel good, but I just want to continue to do that every game we play.”