PULLMAN — Washington State played from behind throughout the second half and could not pull off an unforgettable victory in Jake Dickert’s debut as interim head coach of this fractured football program.

But the Cougars believe they proved something: By no means should this loss dishearten WSU’s fan base or signal more doom and gloom for the Cougars, who just trudged through a distressing week.

“We lost to a good team, but we didn’t roll over,” WSU tackle Abraham Lucas said. “I think a lot of people nationwide or even in this community probably expected us to just roll over and die.

“That’s the great thing about teams — nobody else matters outside of the (players) and the coaches. Everything else is just bollocks. Outside opinions are exactly that: They don’t matter.”

Making their first appearance since head coach Nick Rolovich and four of his assistants were shown the door Monday for failing to comply with a state COVID-19 vaccine mandate, the Cougars (4-4) traded punches with visiting BYU (6-2) until the bittersweet end of a 21-19 decision Saturday in front of a sparse crowd at Gesa Field. 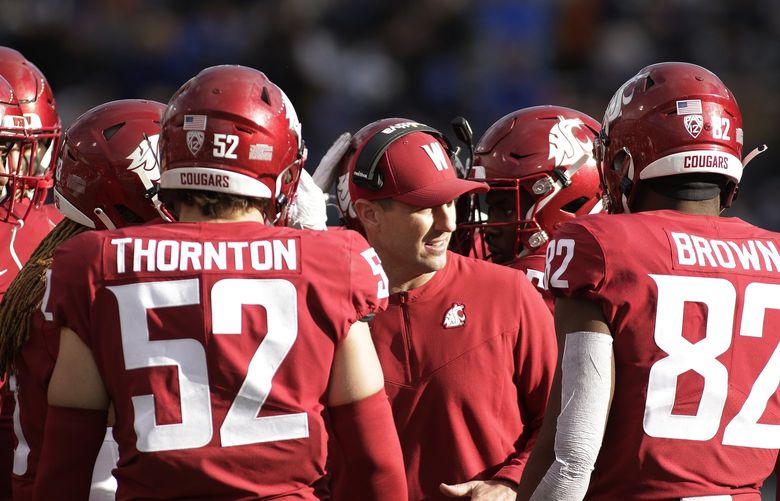 The host Cougs were bitten by an off-target snap on an unsuccessful PAT early in the third quarter. They found the end zone with about four minutes to play, but a two-point attempt — a receiver sweep pass from Lincoln Victor — went for naught and the Cougars from Provo, Utah, killed the clock with their powerful rushing game.

“It’s been a tough week,” Dickert said. “We respect our guys for the way they played. I knew one thing: They were going to come out here and give everything to their teammates, and I think that’s what they did for 60 minutes.”

It came down to well-built BYU running back Tyler Allgeier vs. WSU’s defensive box for one more offensive opportunity for the home side. Yet Allgeier could scarcely be stopped.

“I knew, coming in, that tailback was a tough guy to bring down. He’s proven it all year,” Dickert said. “Our angles gotta be a little better. We were (tackling) too high.

“They broke a lot of arm tackles today.”

WSU failed to tally a takeaway in a game for the first time this season and didn’t effectively pressure BYU quarterback Jaren Hall, who bided his time and made plays when they came — particularly on third downs — passing an efficient 15 of 20.

The WSU Cougars’ run-and-shoot offense went to work with two new assistants and without both its main practitioner in Rolovich, and its former play-caller in Craig Stutzmann.

It had stints of the free-flowing productivity seen throughout the past two weeks, and also periods of disjointedness.

“For the most part, I thought we operated as a staff — with a lot of new pieces — at a really high level,” Dickert said.

WSU made a statement out of the gates that its offensive system would be all right in the hands of offensive coordinator and run-and-shoot guru Brian Smith.

The Cougs raced downfield on their opening series, splitting the passes and runs, and capped a five-minute drive with a score when Max Borghi cut away from trouble and accelerated in from 11 yards out for the first of his three touchdowns on the day.

After BYU responded with a run-heavy scoring drive, the teams dealt slight jabs, but that was it for the remainder of the first half.

Both Cougar outfits were moving the ball. Neither could finish.

WSU quarterback Jayden de Laura was picked off in BYU territory by Malik Moore on a deep overthrow and his offense was plagued by holding calls.

Sacks from WSU defensive linemen Willie Taylor III and Ahmir Crowder stalled BYU possessions that had crossed midfield. Linebacker Jahad Woods also made a backfield stop on a fourth-and-short sweep play in field-goal range, and the opponents settled for a 7-all tie at the break.

“BYU is a tough, physical football team, but at the same time, we’re a good football team,” Dickert said. “I think we proved it once again today.”

The Cougars and Cougs replicated their first-quarter successes out of the halftime locker room, with BYU rumbling ahead behind Allgeier and WSU leaning on Borghi on early downs, and its passing game capitalizing on shallow openings.

De Laura passed 26 of 37 for 257 yards, but his windows deep were closed as BYU rushed three and packed its secondary with six bodies.

“Schematically, they did a few good things that took away our deep shots, but at the end of the day, we still have to execute, we still have to come out with our heads on straight,” slot Calvin Jackson Jr. said.

“It’s not the outcome we wanted … but we were resilient. We didn’t give up. We fought. This BYU team is really, really good.”

Allgeier bulldozed in for another touchdown early in the fourth period, after BYU’s second consecutive five-minute drive. WSU’s six-minute, 11-play, 76-yard possession — which Borghi finished with another short, leg-churning TD run — was not enough, as the two-point try failed.

But after this week of upheaval, you can’t call WSU’s overall performance a failure.

“Our guys have a lot of heart,” Dickert said. “I think they have a lot of passion and they care a lot for each other. As far as the effort and commitment these guys have, and what they played with, I fully expected that, 100%. I didn’t think they’d let each other down.”