The Sun Bowl is slated to kick off at 9 a.m. on Friday on UTEP’s campus. The competition’s organizers and its participating programs — Washington State and Central Michigan — can finally see light at the end of the tunnel after a week filled with uncertainty about whether the postseason contest in West Texas would be played at all.

But no one will relax until the football leaves its tee. The COVID-19 pandemic’s resurgence has made this an unpredictable bowl season — five games have already been wiped out over the last two weeks.

So far, Sun Bowl officials have avoided that fate, and doing so required perseverance and a fair bit of luck after Miami bowed out of the game Sunday because of COVID-19.

CMU’s Arizona Bowl foe, Boise State, did the same one day later. Dozens of phone calls were made, and the Chippewas-Cougars tilt came together in the nick of time — less than four days before the opening whistle. 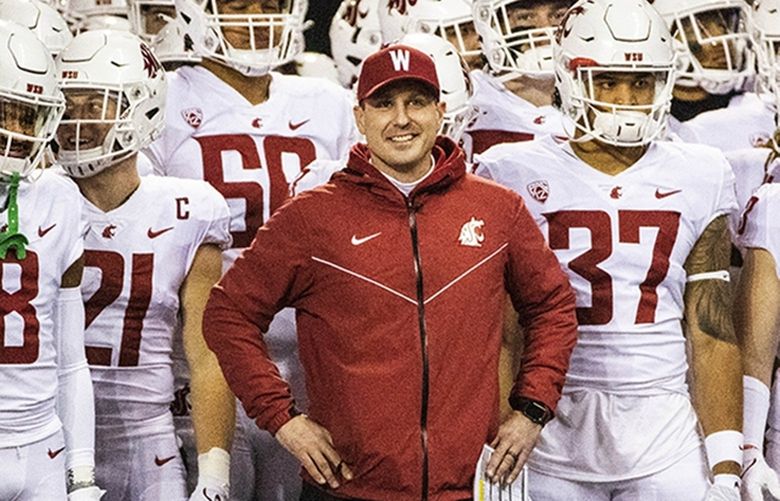 What to watch for when WSU football plays Central Michigan in the Sun Bowl, plus prediction

“They’ve done a lot to give our players an opportunity to compete one more time,” WSU coach Jake Dickert said during a news conference Thursday, giving kudos to the Sun Bowl Association. “If there’s anything I know, it’s that our group at Washington State and Cougars all over the country want to finish this season.

“When we heard the announcement about our opponent, I was just so happy for our guys. It wasn’t about me or our coaches; it was about our players and our seniors getting one more time to be out on that field together. These are the moments they’ll remember forever.”

The Sun Bowl has an intriguing matchup on tap between two teams that know little about each other. The Cougs and Chips have never met before.

WSU (7-5) is appearing in its sixth consecutive bowl game — excluding the coronavirus-impacted 2020 season. That streak started in 2015, when the Cougs topped Miami in a wintry Sun Bowl. Snow isn’t in the forecast for Friday but rain is.

The Cougars “outlasted adversity” this year, Dickert said. Former coach Nick Rolovich and four assistants were fired in mid-October for failing to comply with a state COVID-19 vaccine mandate.

This veteran-laden WSU outfit surged to three wins under Dickert. Its offense stayed explosive and its defense made a considerable turnaround in comparison to last season. The Cougs fell just one late result short of qualifying for the Pac-12 title game.

“Adversity in life can be your ally for growth if you allow it to be,” Dickert said. “It brought us closer together. This group allowed it and you can see it as we’ve gone throughout this season. This week is nothing different.

“I tell our guys all the time that football is life’s greatest teacher. When these things happen, you’ve got to be able to lock your knees and have a positive mindset, keep pushing forward and great outcomes happen, and that’s what happened this week.”

After a tumultuous campaign, the Cougars see the extra month of practice time and team bonding at bowl-week events as rewarding. Sun Bowl executive director Bernie Olivas commended Dickert and WSU for their high spirits.

“I don’t think I’ve ever seen a more enthusiastic football team come off the plane, wanting to be here, wanting to play this football game,” he said.

WSU’s depth chart will be limited in a few key spots. Senior running backs Max Borghi and Deon McIntosh have concluded their Coug careers a game early. Borghi opted out of the postseason to begin training for the NFL draft while McIntosh didn’t make the trip for unspecified reasons.

WSU shifted some pieces around on its offensive line and third-string running back Nakia Watson, a native Texan and Wisconsin transfer, will start his first career game at tailback. The Cougars must rely on backups at cornerback, too, after NFL hopeful CB Jaylen Watson elected to opt out of the postseason.

“I don’t anticipate any lull from any of these guys that are playing,” Dickert said. “They’ve been ready and we’re excited about what they can do.

“Everyone knows we’re a little short-staffed, so we put our heads down and put together the best plan possible for our guys. It’s about doing things they’re comfortable doing and playing fast.”

CMU (8-4), of the Mid-American Conference, also narrowly missed out on a divisional crown and a bid to the MAC championship.

The Chippewas enjoy the services of the nation’s leading rusher in Lew Nichols III (1,710 yards), a reliable pocket-passing quarterback in Daniel Richardson and two of the Group of Five’s best offensive tackles.

“One of your biggest fears after four weeks off is tackling,” Dickert said when asked about Nichols. “We gotta make sure we’re doing a good job of tackling.”

On defense — a unit coordinated by former WSU assistant Robb Akey — the Chippewas’ ability to stop the run is formidable, but their secondary is questionable.

CMU practiced in Tucson throughout the week and took part in Arizona Bowl activities before making the nearly five-hour drive to El Paso on Thursday.

“The logistics are crazy,” third-year CMU coach Jim McElwain said. “You don’t (complain) about it — you just do it. You figure out what’s best for your players and move forward, make it the best experience for your players that you can.”

The Chips face a tall task in preparing for a Power Five opponent at the last minute, but they’re glad to be playing before a CBS audience, and they might get a nice payout from the Sun Bowl, as well.

“We’re playing a really good team with kinda the land of misfit toys, and we’re going to have a blast doing it,” McElwain said. “You’re talking about a Power Five program in the Pac-12 against a bunch of guys from Central Michigan with one set of uniforms. It’s a huge challenge for us and yet, what a great opportunity. … We get a chance for three hours to put Central Michigan on national television.”

Both staffs had to round up film in a hurry and conduct impromptu study sessions with players over the past three days.

It’s not enough time to institute a game plan, so the Cougars and Chippewas are “relying on base rules,” Dickert said.

“It’s one of those things that’s going to make this kind of fun, too,” Akey added. “You just go out and coach some ball.”