Skip to content
By
Colton Clark
The Spokesman Review

MADISON, Wis. — It was a significant win in the history of Washington State’s program, a defining win for first-year Cougars coach and Wisconsin native Jake Dickert, a signature win for his “New Wazzu,” and a special win for a “small-market” Power Five team on a big-time stage against a high-profile opponent.

Underdogs from the Pac-12 and afterthoughts in this offseason’s conference realignment discussions, the Cougs marched into America’s Heartland and outmuscled a Big Ten power in front of 80,000 attendees and a national television audience. Saturday’s game marked an unforgettable occasion for WSU, which stunned the Wisconsin Badgers 17-14 in a wild game at Camp Randall Stadium.

The Cougars, playing under a first-year staff, moved to 2-0 while introducing themselves to the college football world. Competing in their most challenging nonconference game in years, the Cougs handed Wisconsin just its third nonconference home loss in two decades. 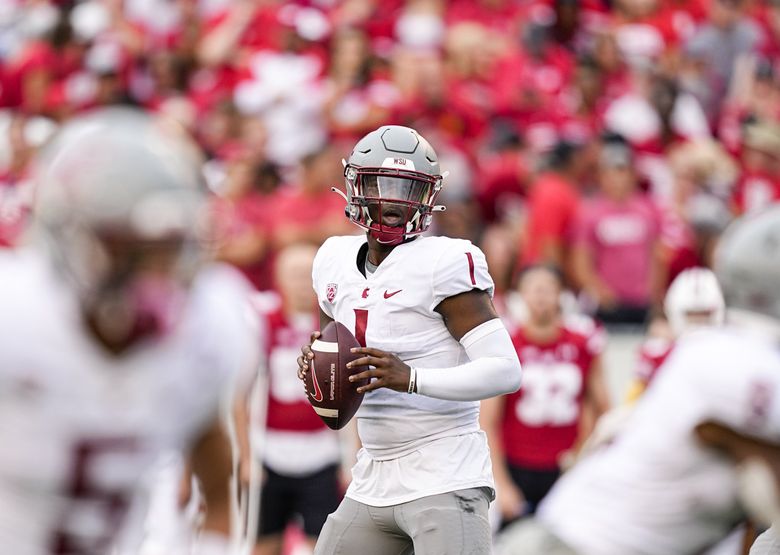 “This team, since January, has trusted the process and knew it was going to be different,” Dickert said during an emotional postgame news conference after he guided a historic win for his program with hundreds of his loved ones in attendance.

“It’s the ‘New Wazzu,’ it’s what we’ve been talking about and what we’ve been working for, to get to this moment. We still have so much out there for us. I’m so proud of that locker room and where they’re at, the trust they have in the coaching staff. Most importantly, they played for each other, and that’s how you win big, tough football games on the road against a very good opponent.”

WSU didn’t crack the AP Top 25, but the Cougs received 30 votes in the Week 3 poll, released Sunday afternoon. Wisconsin dropped from the rankings.

First, let’s look back on WSU’s most impressive nonconference victory in recent history:

On paper, it might not look like such a stellar performance from the Cougar defense. Wisconsin accumulated over 400 yards. The Badgers averaged a solid 5.3 yards per play. They converted 23 first downs on 75 plays. Wisconsin rushed for 174 yards on 44 attempts — All-American running back Braelon Allen picked up 4.7 yards per carry and churned out nearly 100 yards — and controlled time of possession, holding the ball for 38 minutes.

But don’t be fooled by the numbers. WSU’s defense was terrific on Saturday.

The Cougs play a resilient, opportunistic brand of defense that doesn’t always translate to the stat sheet. They did so last year under Dickert, who served as coordinator then, and their identity hasn’t changed this season under first-year DC Brian Ward.

“It all leads up to moments like these,” star WSU “edge” Ron Stone Jr. said. “Ultimately, it’s just about strain and bend but don’t break, and that’s what we did.”

The unit gave up ground, but it seldom caved against the Badgers and their formidable ground game. WSU’s defenders swarmed to the ball and prevented Badger ball-carriers from reaching the second level. Paced by a defensive front that could very well be the Pac-12’s best, WSU logged six tackles for loss in the run game. Wisconsin had just four rushing plays go for more than 10 yards (with a long of 17 yards).

Although the Badgers managed to plug away downfield and register respectable yardage totals, they had trouble finishing drives and were often thwarted when they neared the end zone.

Wisconsin was held scoreless in the second half despite two red-zone appearances.

WSU has forced five turnovers already this season. The Cougs had a knack for knocking balls free last year, finishing the 2021 campaign tied for fifth nationally in takeaways with 29.

The Cougars performed with commendable effort late in the game while playing short-handed. Starting strong safety Jordan Lee was shaken up on the last play of the third quarter. He walked gingerly off the field and never returned to the lineup. Middle linebacker Travion Brown, a co-starter, suffered an injury during Wisconsin’s final drive and was helped to the sideline. WSU played the entire second half without its top coverage corner in Derrick Langford Jr., who came up limping after an awkward collision midway through the second quarter and emerged from the locker room after halftime with a walking boot on his left foot.

WSU’s offense struggled to sustain possessions against a stalwart Wisconsin defense that ranked among the best in the country last season in most statistical categories.

“We knew it was gonna be a dogfight,” running back Nakia Watson said.

The Cougs went three-and-out on four of their 10 series. They found the occasional hole in the Badgers’ secondary, hitting a couple of big passing plays on two of their three scoring series — one of those drives was only made possible because of a special-teams highlight.

A 38-yard rainbow pass from quarterback Cameron Ward to tight end Billy Riviere set up a short touchdown in the second quarter, and a check-down toss from Ward to running back Nakia Watson went for a 31-yard TD in the third quarter — the Cougs were fortunate to get that one. Ward had thrown an interception on the possession, but slotback Lincoln Victor made an incredible effort and stripped the ball away from a Badger defensive back, giving WSU a fresh set of downs. (Side note: We couldn’t track down the last college game that included two interception-fumble plays).

Slot receiver Renard Bell opened the second half with a 73-yard kick return. That drive ended in a field goal.

Against a program that has long been known as a defensive heavyweight, the Cougar Air Raid was mostly quiet.

Wisconsin’s defensive front closed running lanes. Ward felt pressure in the pocket and had to settle for short passes toward the sidelines. Before its final drive, WSU’s offense had been on the field for just 17 minutes, had barely managed 200 total yards on just 40 plays, and had converted only seven first downs.

The Cougs saved their longest and most efficient drive for last.

After their tenacious defense made a clutch red-zone takeaway with 5:14 remaining in the game, WSU’s offense was able to milk the rest of the clock and clinch the win.

Dickert often speaks about the versatility of his team’s new “Coug Raid.” The system sometimes operates at a quick tempo. But the Cougs can slow the pace if need be. They lean on the aerial attack when necessary and are confident in their ability to grind out yardage on the ground.

The Cougs managed the clock perfectly, holding onto the ball for 10 plays and gaining 43 yards to deny the Badger offense another opportunity.

“We brought in this offense to do what we did at the end of this game,” Dickert said.