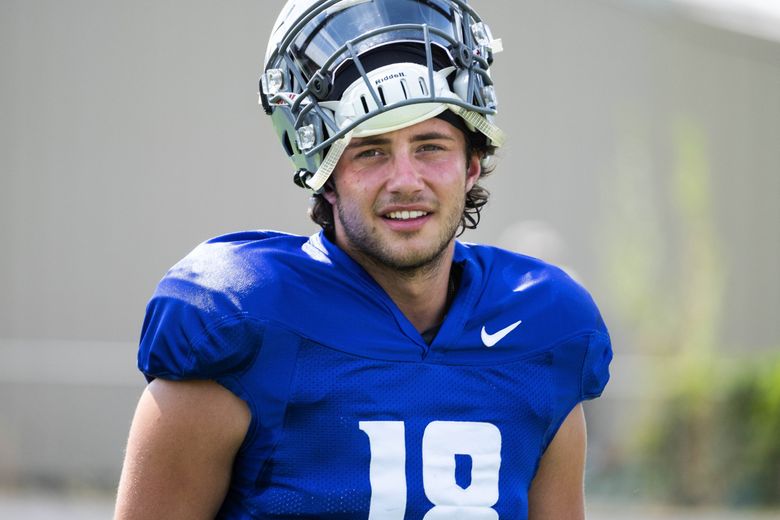 LEWISTON, Idaho — Anthony Gordon was ready for the competition this time.

He thought he was ready a year ago, when as a Washington State redshirt junior, he was locked in a three-way battle to be the starting quarterback for the Cougars with junior Trey Tinsley and Gardner Minshew, a graduate transfer from East Carolina.

All Cougar fans know how that turned out. Minshew won the job, leading WSU to its most victories (11) in school history in his one season and leading the nation in passing yardage.

With Minshew gone, Gordon entered fall camp in another three-way battle for the job, with Tinsley and Gage Gubrud, a graduate transfer from Eastern Washington with more than 11,000 yards of total offense in 2½ seasons of action.

Many assumed Gubrud would be the guy, and he performed well in fall camp.

But this time Gordon was ready. Gubrud didn’t lose the job. Gordon won it.

“Last year, I started worrying too much about how the other guys were doing,” Gordon said during fall camp. “This year, I am more focused on what I have to do, and what I need to do to get better, and playing the next play. Whether it’s an explosive play or a horrible play, you’ve got to play the next play.”

Gordon has been called a “gunslinger” by teammates. He loves to take chances and throw the ball downfield, with an arm that running back Max Borghi describes as “a cannon.”

But the Gordon WSU fans will see Saturday is a toned-down version of the player who battled for the job last year. It’s what helped make him ready for the competition this time.

“Last year I would get too over my head, thinking I could fit the ball into a window that I can’t,” Gordon said. “And I would get into trouble taking sacks — and that was one thing Gardner really helped me out with, taking no negative plays. He was great at not taking sacks and limiting picks and that is something I really worked toward.”

Gordon, 6 feet 3 and 210 pounds, has thrown for all of 17 yards during three seasons (one as a redshirt) with Washington State.

But he knows all about throwing the ball up and down the field. As a junior at Terra Nova High School in Pacifica, Calif., he threw for 3,410 yards and 32 touchdowns. Then, as a senior, he set the Central Coast Central Section record with 4,899 passing yards and 49 touchdowns.

Gordon was named Medium School State Player of the Year by Cal-Hi Sports after leading his team to the section title. And how many scholarship offers did all of his production and success yield?

“I was a baseball player primarily growing up and I didn’t start playing football until my freshman year of high school,” he said. “We ran a wide-open offense but (Terra Nova) has always been known as a school that gets overlooked. I was pretty small in high school, too (180 pounds), so maybe that had something to do with it too.”

Gordon, who pitched and played in the infield for Terra Nova, was drafted in the 36th round by the New York Mets in 2015, and he had to make a decision on what sport to choose.

“It was pretty late (in the draft) and it wasn’t very appealing, so I thought football was a better option,” he said.

Gordon went to City College of San Francisco to play football, but without any fanfare.

“They didn’t have the highest expectations for me,” he said. “They thought I was going to grayshirt (enroll after the season), sit a year and learn the system,” he said. “I came in and kind of caught them by surprise, and took the team, and took them to heights that we had not been to for a while.”

Indeed he did, throwing for 3,864 yards and 37 touchdowns while leading his team to a 12-1 record and the state community college title. He completed 65 percent of his passes (286 of 439), but despite all that, he still was not getting much attention and was prepared to return to City College of San Francisco as a sophomore.

“But then (WSU coach) Mike Leach called in late May, and said, ‘We got a spot for you, would you like to be on our team?’” Gordon said. “I committed within 10 minutes. It was a really easy decision.”

After two seasons (one as a redshirt) watching Luke Falk lead WSU at quarterback, Gordon’s first big chance came last year with Falk gone. Losing the job to Minshew hurt, but he learned a lot watching Minshew and the team have so much success.

“It was hard not playing, but we went 11-2 and I was happy to be part of such a great team,” Gordon said. “I learned a lot from Gardner, and everything he brought to the table. He was instrumental to my success during the spring and going into the fall. Gardner really helped me out in the leadership aspects and in analyzing defenses. It all works out for a reason.”

Gordon shined in the spring, and entered fall camp with a lot of confidence after starring in the spring game, completing 21 of 30 passes for 234 yards and three touchdowns.

He continued that in fall camp, while also showing the leadership that Leach demands from the position. Leach had said that the starting quarterback would be the one who best led the team and elevated the play of his teammates.

Gordon took that to heart.

“I have been working on getting all the guys together,” he said. “I like to play with a little chip on my shoulder, and a little bit of confidence and the guys respond well to that.”

Last year at camp, Gordon might follow an amazing play with a big mistake. He has learned to be more cautious, but he’s still a gunslinger at heart and he’ll still take some chances.

“I have to stay true to myself, and stay true to my game,” he said. “I’ve always been a guy who liked to throw the ball downfield and put it into tight windows. It’s hurt me a few times, but overall I think it’s been beneficial – but just being a bit more cautious is something I am always aware of.”

Gordon will be the starter, but Leach said he felt confident with all three of the quarterbacks battling for the job, and the depth at that position is one reason why Leach has said this team can improve on last year’s 11-2 record.

“We’ve got three of them that we are feeling pretty good about,” Leach said early in fall camp. “Gordon has the quickest release, Tinsley knows all the details of the offense and Gage can create some stuff (with his running) and has experience playing under center. All three are accurate.”

Still, the media picked the Cougars to finish fourth in the Pac-12 North. That does not faze the Cougars’ new starting quarterback.

“It’s the fuel to our fire,” Gordon said. “We work in the shadows and then we come out in the light during game time and wake people up. We really embrace the underdog role. Whether they believe us or not, we’re gunning for a Pac-12 championship.”