The decision by arbitrators to allow Russian figure skater Kamila Valieva to compete this week brought little clarity to the dispute over her positive test for a banned substance. Some lingering questions are unlikely to be answered for weeks, if not months.

Valieva, the 15-year-old prodigy who last week became the first woman to land a quadruple jump in competition, was crucial to Russia’s victory in the team event, and she is widely considered the favorite in the women’s individual competition that opens Tuesday night in Beijing. But the consequences of her positive test are just beginning to send ripples across the skating world, and at least a dozen of her competitors will not be awarded their own medals until her case is settled.

Here’s what we know so far, and what we don’t.

Valieva tested positive for trimetazidine, a banned substance. The drug, known as TMZ, is a heart medication that could increase endurance. The positive result came from a urine sample that Valieva submitted at the Russian national championship on Dec. 25. But her positive result was not confirmed and relayed to Russian officials, and then to her, for more than six weeks. Russia’s anti-doping agency said it learned of the failed test on Feb. 7, the day Valieva led the Russians to a gold medal in the team event. 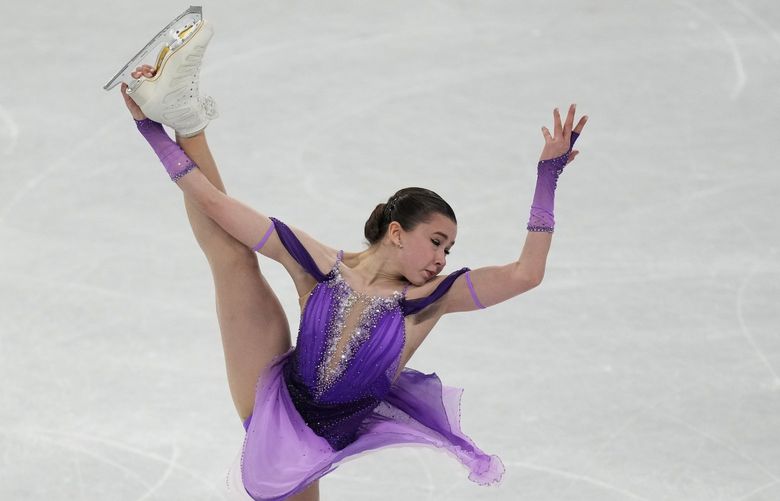 Did Valieva know she was taking a banned substance?

It is not known if Valieva knowingly took a banned drug. Many experts said, based on past cases, it was possible that she had been given the drug by adults, probably without her knowledge.

The adults around her — coaches, trainers and medical personnel who may have known about the drug use or provided her with trimetazidine — could face punishment.

Valieva has not spoken with reporters since her positive test was revealed.

Who is her coach, and what has she said?

Valieva’s coach, Eteri Tutberidze, told Russia’s state-run TV network Channel One on Saturday, in her first public comments on the case, that there were “many questions and very few answers” when it came to the positive test result.

Despite those unknowns, she said: “I wanted to say that we are absolutely confident that Kamila is innocent and clean.”

Tutberidze is known for her grueling training regimen and for minting winners. A former pairs skater who lived in the United States for six years, she coached the gold and silver medalists at the 2018 Olympics. More than a few of her top skaters have battled injuries or eating disorders, or both, and left the sport soon after they reached the top.

What punishment could Valieva receive?

If she is ruled ineligible, even weeks or months from now, she or the Russian team could be stripped of their gold medals from the team event. And if she wins a medal in women’s singles, that could be revoked, too. The International Olympic Committee said Monday that no medals will be given in events in Beijing in which Valieva has won or claimed a spot on the podium, at least until the case is resolved.

Because she is younger than 16, Valieva is considered a “protected person” by the World Anti-Doping Agency and therefore could receive a lesser punishment than an adult who could receive a maximum two-year suspension. If she can show her use of the drug was unintentional, she could receive only a reprimand, and be able to keep her medal or medals.

Why was she allowed to go to Beijing in the first place?

If the results from her Dec. 25 drug test had been reported in a timely manner, it is possible that Valieva would not have been able to attend the Beijing Games.

Travis T. Tygart, the chief executive of the U.S. Anti-Doping Agency, called it “total gross incompetence” that it took more than a month for Valieva’s test result to be reported by the lab, and he said that the Russian anti-doping agency and the World Anti-Doping Agency, which operates the lab in Stockholm, should have expedited the result with the Olympics approaching. WADA said Monday that Russia had failed to flag the urgency of the test to the lab, which might have led to a speedier turnaround. Russian officials have said they believe the lab had staff shortages because of the pandemic.

Isn’t Russia banned from the Olympics?

Russia has been banned from the most recent three Olympics after it was revealed that it conducted a state-sponsored doping scheme at the 2014 Winter Games in Sochi, Russia. But Russian athletes have been allowed to compete with special permission as so-called neutral athletes. At these Games, they are competing as the Russian Olympic Committee, but the Russian flag cannot be displayed nor can its anthem be played at medal ceremonies.

Who decided Valieva could continue to compete?

The Court of Arbitration for Sport, the highest legal body in global sports, appointed a panel of judges who ruled on a narrow procedural point: Should Russia’s anti-doping agency reinstate a provision ban that it imposed on Valieva last week and then quickly lifted? The panel said Monday that it would be unfair and cause “irreparable harm” to Valieva if she were barred from the Olympic competition.

The panel of arbitrators said it “considered fundamental principles of fairness, proportionality, irreparable harm and the balance of interests” between Valieva and the organizations, which included the IOC, seeking to bar her from The Games. It also noted that she was a minor and did not test positive during the Olympics.

Who decided not to award medals in her events?

The International Olympic Committee decided that Valieva — and the other medalists in her event, should she finish among the top three — would not be recognized in the traditional manner after events that included her because of lingering doubts about her eligibility.

That includes both the flower ceremony — in Beijing, athletes are presented with a toy mascot of The Games — and the medal ceremony.

Why can’t her competitors receive medals, either?

It appears that the IOC is holding out the possibility that Valieva could be stripped of medals and her competitors could be elevated to higher awards. But the committee did not make clear why it would not award medals to rival competitors in the interim.

When will medals be awarded in Valieva’s events?

If Valieva does not finish in the top three in the women’s competition, the medals would be awarded as normal. But given her talents, that would be a surprise.

Could the United States be elevated to gold in the team figure skating event?

The U.S. team won silver in the event, behind the Russians. If Valieva, or the Russian team as a whole, is disqualified as a result of the doping case, even months from now, the U.S. team would be awarded the gold medal. In such a case, Japan, which won the bronze, would rise to the silver, and Canada, which finished fourth, would be awarded the bronze.

When is Valieva expected to skate again?

She has been cleared to compete in the women’s singles competition, which begins with the short program on Tuesday night in Beijing (Tuesday morning in the United States), and concludes with the free skate on Thursday night in Beijing (Thursday morning in the United States). She participated in practices on Sunday and Monday but declined to speak to reporters afterward.