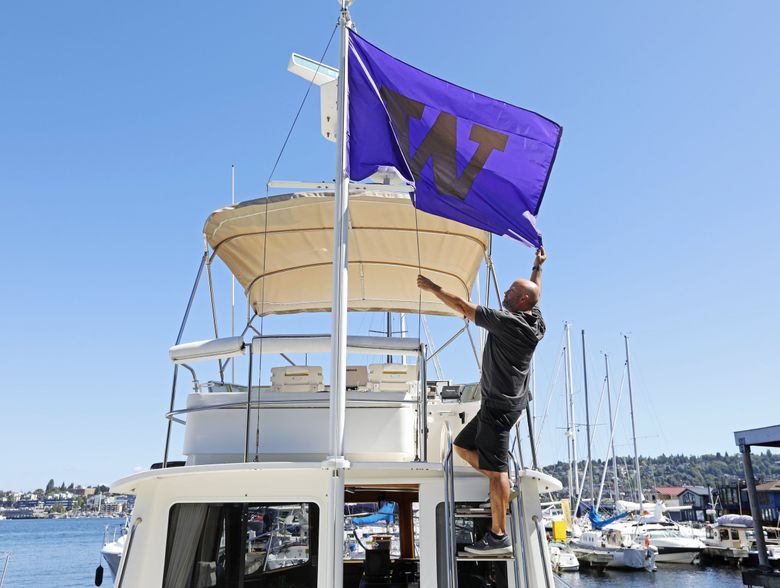 Trevor MacLachlan, the owner of Seattle Charters, flies a University of Washington flag to demonstrate how he outfits his 40 foot boat “Splendido” for sailgating a Huskies football game, Tuesday, Aug. 25, 2020 on Seattle’s Lake Union. But since the pandemic, MacLachlan said he has had to return deposits for football games. MacLachlan notes he only outfits the boat with UW flags, since he graduated there in the 1990s, but will fly whatever school flag a customer brings. (Ken Lambert / The Seattle Times)

There’s an elephant in the room.

Actually, they’re everywhere. A white elephant logo adorns the front door. Carved wooden elephants jut proudly from the pillars. They’re engraved on the beer menu displayed behind the bar and drawn on a bench in red and black marker. In a massive painting hanging on the wall, an equally massive gray elephant emerges from the mist.

At Big Time Brewery & Alehouse — Seattle’s oldest active brewpub, and a U District staple since 1988 — the pachyderms are purposeful. They serve as a symbolic salute to a longtime regular, as well as a tasteful tribute to an animal that endures. Said regular worked at the University of Washington’s Center for Conservation Biology, where he used dung DNA to identify where African elephants had been poached — and, by extension, better protect the endangered giants.

That regular spent his time and money at Big Time Brewing. And over many years and beers, his friends returned the favor.

“That was one of the bigger charity donations that we did every year (to UW’s Center for Conservation Biology), and that’s something we try to continue to do,” said Rick McLaughlin, who has worked at Big Time for 15 years and owned it for five and a half. “We love elephants. We think it’s a gorgeous, majestic animal, and we want to try to help keep them going.”

But, again, there’s an elephant in the room — and this one is less literal. As COVID-19 continues to crush the local economy, businesses like Big Time Brewing are suddenly struggling to survive. Classes have moved almost entirely online, and a fall UW football season won’t arrive in September to help keep them going.

The Pac-12 Conference announced this month that its fall sports season has been postponed through the end of the year. And in a letter to UW fans, athletic director Jen Cohen estimated that the Huskies could suffer up to $70 million in revenue losses as a result.

But the University of Washington won’t be the only one affected. There are also boat charters and hotels and restaurants and bars. There are so many endangered elephants.

And there’s Big Time Brewery. There’s that little brewpub on University Way with an elephant on the door, where Rick worked for nearly a decade to realize a dream.

“I bartended here seven days a week and saved all my money and told the owner that I was going to buy it from him someday,” Rick McLaughlin said. “He was like, ‘Oh, sure.’ After years of constantly grinding and saving money I made him an offer and took on some private investors, and that was it.”

More than five years later, McLaughlin is bracing for a fall without UW football.

“Consistently, home football games are the busiest days of the year,” said the Stanwood native, who moved to Seattle at age 19.

In a typical UW football weekend, Big Time’s business more than doubles. The brewpub opens early to serve breakfast and stays busy throughout the day. There are students and alums and parents and opponents. They order pizza and beer, year after year.

In all, Big Time Brewery — named the city’s best brewpub in 2019 by Seattle Magazine — will lose between $90,000 and $150,000 because of the sudden absence of a fall football season, according to its owner.

To survive, McLaughlin has been forced to embrace a new beginning. He accepted federal Paycheck Protection Program funds to pay his staff and keep from closing. They’ve begun to can their beer and sell it to local shops. Big Time — which has long leaned on large-party reservations that are no longer possible — has embraced to-go orders for the first time ever. It’s exploring the possibility of outdoor dining as well.

“The way I look at it is it’s like owning a brand-new business right now,” said McLaughlin, who’s back to logging 80 hours a week in an attempt to make it work. “We’re trying to make new clientele and new kinds of revenue streams, because the more you diversify, the better. That’s how I’m treating it, even though we’ve been open for 32 years.”

Consistently, home football games are the busiest days of the year”

For Trevor MacLachlan, Washington football is a family affair.

His father, Douglas “Mac” MacLachlan, taught international business and marketing at UW’s Foster School of Business for 45 years. Mac began anchoring his sailboat, BIMI, outside of Husky football games in 1970. The family occasionally cruised down the California coast to watch the Huskies in the Rose Bowl. Trevor graduated from UW in the 1990s and memorably played the sousaphone in the Husky marching band.

After decades of fall sailgates floating in Lake Washington, Trevor decided to share the experience — and maybe make some money. He launched a charter company in 2006, then expanded it with the purchase of a 40-foot power yacht named “Splendido” in 2013. Ever since, he’s guided guests through the Ballard Locks, Lake Union, Portage Bay and the Montlake Cut, en route to a destination directly outside Husky Stadium.

And when Washington started winning, so did everybody else.

“What’s interesting is the last couple years (the games) have been booking up earlier and earlier,” said Trevor MacLachlan, the owner of Seattle Charters. “It used to be that it wouldn’t be until late summer that you’d start to get people asking about the season. But I had most of the entire season booked up by February this year. I had people booking as early as last fall, because word gets out that there’s only so many games.”

There’s only so many games — and this fall, even fewer. But Trevor typically makes $1,300 or more each football Saturday on Splendido. He booked the highly anticipated 2020 season opener against Michigan for $1,800. He often hires a second captain to utilize BIMI as well. His father, since retired, accompanies Trevor as part of the crew.

“We get lots of different folks coming in, lots of folks coming from out of town,” Trevor said. “There’s a surprising number of alums from different colleges that just like football so much that they’ve heard about the Husky sailgating experience and they travel around and do a game somewhere in the country every year. The sort of crème de la crème is the Husky football experience.”

Now, unfortunately, the crème de la crème has been canceled. Trevor issued refunds for the sailgate charters he’d already booked; he said the postponed football season will cost him $23,000 this fall. And to compensate, he’s running boat deliveries up and down the coast and leaning heavily into a variety of training sessions for beginning boaters.

But nothing will replace the feeling of docking with his dad on Saturdays in Husky Harbor, with a pair of purple flags flying high above the boat.

“It’s just been fun. This is the first season it’s ever happened, where it’s just over,” Trevor MacLachlan said. “There’s obviously a lot of problems with COVID, and I guess complaining about this is not hugely important in the grand scheme of things. But it’s definitely a bummer.”

Earl’s on the Ave probably shouldn’t be open.

One look inside, and you’ll understand why.

At the popular U District sports bar on University Way, Washington football helmets dangle from the ceiling like disco balls. The sign outside is purple and gold. The bathroom doors are purple. The booths are purple. Fluorescent UW signs light up the walls. Old Husky schedules are plastered like wallpaper, stretching across the ceiling.

“It’s super difficult,” said owner Robert McLaughlin (no relation to Rick). “Those are our six busiest days of the year. That carries us through the slow winter months.”

Somehow, Earl’s is enduring a seemingly endless winter. Other bars, like Shultzy’s and Finn MacCool’s, remain temporarily closed. The iconic College Inn Pub permanently closed its doors after 46 years in the district.

The difference between a typical Saturday and a UW football game day, Robert said, is “night and day.” On fall Saturdays, the line at Earl’s stretches clear out the door. They open at 8 a.m. and serve a breakfast buffet. They’re slammed until close at 2 the next morning.

“Our staffing is much higher, especially depending on the game,” he said. “If it’s the Apple Cup or Oregon then it’s really a lot higher. Because we get both the away and home fans. A lot of times we’ll get the local radio station to do a one- or two-hour broadcast. We modify our drink menus. We have gameday specials and gameday drinks to try to help the bartenders move stuff out quickly.”

Now, suddenly, there’s no need for that. Earl’s was closed from March 15 to June 8 because of local health guidelines. Their hours are limited; their capacity is reduced. And without Washington football this fall, it seems their long winter will continue to linger.

“If I made the financial decision, the decision with my brain, I would actually probably close right now,” said Robert McLaughlin, a native Washingtonian who bought Earl’s 16 years ago after leaving the software industry. “But my goal is to keep my employees employed, because they’re a lot worse off than I would be if I wasn’t open. Closing at 10 o’clock is really hurting us. We’re not even breaking even, really. But at least we’re able to keep some folks employed.”

Carl Meyer finds himself in a similar position. The general manager of Silver Cloud Hotel in the U District, Meyer’s business has been battered by COVID-19. Many similar hotels have temporarily closed, he said. And the loss of UW football weekends presents another unexpected challenge in an unprecedented year.

If I made the financial decision, the decision with my brain, I would actually probably close right now.”

“It changes our projections substantially,” Meyer told The Times. “We would normally sell out (big UW football weekends). Our business would already have a lot of commitments on the books. This year, we’re looking at a very short-term booking window — up to in the week, for the week.

“Obviously business all around is slower. People aren’t traveling as much. We don’t have very many vacationers this summer like we normally would.”

Meyer added, “I’m just very thankful that we’ve been able to stay open and provide for our guests, because a lot of people I know haven’t been able to.”

The elephants are still out there — albeit fewer than before. And without Washington football, they’ll need help to endure.

“We try to do it right,” said Big Time Brewery owner Rick McLaughlin. “We just have to survive and keep going forward.”