Skip to content
TRAFFIC
Multiple roads closed in Belltown due to fire on Second Avenue.

The Jacob Eason Era is over.

But didn’t it just begin?

The morning after Christmas, Washington’s redshirt junior quarterback — who started for the Huskies in the 2019 season, after redshirting in 2018 — announced that he will declare for the 2020 NFL draft.

“Playing this season for the University of Washington has been one of the greatest experiences of my life,” Eason said in a tweet on Thursday. “UW has given me an incredible opportunity to develop as a football player and a person, and I am forever grateful and honored to be a Husky.

“After contemplating my future with my family and coaches, I have decided to forego my 5th year of college and enter the 2020 NFL draft. The opportunity to play quarterback in the NFL has been a lifelong dream, and my heart is set on the challenge ahead.” 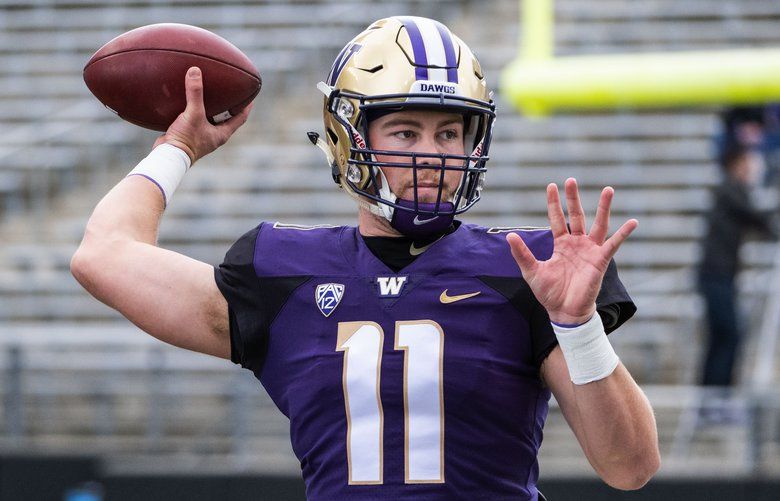 “We wish Jacob nothing but the best,” UW head coach Jimmy Lake added in a statement. “He was a terrific teammate who worked very hard in his two years as a Husky. I’m looking forward to watching him succeed at the next level.”

On Dec. 19, ESPN NFL draft analyst Mel Kiper Jr. ranked Eason as his No. 4 quarterback prospect in the 2020 NFL draft, behind Oregon’s Justin Herbert (3), Alabama’s Tua Tagovailoa (2) and LSU’s Joe Burrow (1). ESPN draft analyst Todd McShay did not include Eason in the first round of his most recent mock draft on Dec. 16. Scott Wright, a draft evaluator for WalterFootball.com, slotted Eason in the second round at No. 34 overall to the Indianapolis Colts in a mock draft that was updated on Wednesday.

But, between now and late April, a whole lot can change.

Still, potential didn’t always translate into production in Eason’s lone season as Washington’s starter. In 13 games, the former Lake Stevens standout completed 64.2% of his passes, throwing for 3,132 yards with 23 touchdowns and eight interceptions. That included just three touchdown passes and four interceptions in his last four games. He also completed just 59.5% of his passes, throwing for an average of 224.6 yards with 12 touchdowns and seven picks, against conference opponents.

“This year, as a redshirt junior at Washington, we saw some good things,” said The Athletic NFL Draft analyst Dane Brugler. “But we also saw a guy that was undeveloped in some areas, especially against pressure. That’s the biggest question mark that I have. He’s a bigger, slower Matthew Stafford. He’s got that power arm. He can put the ball anywhere he wants. Very confident thrower. But when he’s moved from his spot, that’s when his efficiency and productivity start to decline.”

Still, Eason’s measurables — and that mouthwatering physical potential — may ultimately overshadow the question marks. Brugler said that Eason “is in the mix to be a possible first round pick. There’s some intriguing teams in the mid-first round — the Colts, the Bucs — that are going to be looking for a quarterback possibly. I think he’s right there in that mix.”

Of course, some will inevitably argue that Eason should have returned for his redshirt senior season — that 12, 13 or 14 more games might have allowed him to better understand defenses, beat blitzes and add to his NFL resume.

But the prospect of a new head coach, offensive coordinator and quarterbacks coach (not to mention three new starting offensive linemen) in 2020 may have also nudged him out the door.

“Is there a little meat left on the bone in terms of his draft stock, if he went back and had a great final season at Washington?” Wright said. “Sure, he could maybe go higher. He could play himself into a top-10 overall pick. He certainly has top-of-the-draft type of talent.

“But it’s going to be a good quarterback competition next year, too, with Trevor Lawrence from Clemson and (Justin) Fields from Ohio State. So there’s no guarantee he’d be the first or second quarterback off the board a year from now, even with a great season.”

Few would classify Eason’s brief, somewhat unsatisfying Husky career as “great.” Still, it ended on a positive note; the redshirt junior completed 22 of 32 passes for 210 yards and a touchdown in the 38-7 Las Vegas Bowl win over Boise State on Dec. 21. When asked after the game about his impending draft decision, Eason said that “I’ve got to have a conversation with my family and these coaches and this team and figure it out.”

“He hadn’t played for a long time, until this year,” former UW head coach Chris Petersen said following the Las Vegas Bowl win. “I think he learned a lot of things and I think he’s growing. Whatever his future holds, I know it’s going to be bright.”

It may be, but Eason’s college career certainly didn’t go how many originally expected. A passing prodigy at Lake Stevens High School, Eason was ranked as a five-star recruit, the No. 1 player in the state of Washington and the No. 4 overall recruit in the 2016 class by 247Sports. He started 12 games as a true freshman for the 8-5 Bulldogs in 2016, completing 55% of his passes while throwing for 2,430 yards with 16 touchdowns and eight interceptions. After injuring his knee in the 2017 season opener, he was promptly replaced by four-star freshman Jake Fromm and transferred to UW after the season.

It has hardly been a direct route from Friday night lights in Lake Stevens to the first round of the 2020 NFL draft. But, despite the unexpected detours, Eason may arrive at his intended destination nonetheless.

“I think you have Herbert, Jordan Love, Jacob Eason really fighting for positioning to be that next guy off the board (after Burrow and Tagovailoa),” Brugler said. “It’s going to be interesting. I don’t think there’s going to be a consensus. Each team is going to be looking for different things.

“Jacob Eason has the physical traits to be a first-round pick. It just comes down to, do teams believe he’s where he needs to be mentally to be deserving of a pick in the top 32?”

As for Eason’s successor, Washington is currently slated to enter the 2020 season with three scholarship quarterbacks: redshirt sophomore Jacob Sirmon, redshirt freshman Dylan Morris and true freshman and early enrollee Ethan Garbers. A Bothell product, Sirmon completed 2 of 3 passes for 19 yards in 2019. Jake Haener, who would have been a redshirt junior in 2020, transferred to Fresno State after losing a quarterback competition to Eason last August. Redshirt freshman quarterback Colson Yankoff also transferred to UCLA last spring.

It’s also possible that Lake and Co. could dip into the transfer market for a player like Stanford’s K.J. Costello, though it has been difficult for grad transfers to qualify academically at UW in the past.

Beyond next fall, UW’s future under center may be five-star Kennedy Catholic standout and Husky legacy Sam Huard, who is scheduled to sign with Washington in 2021.

As for the state’s last five-star quarterback … well, as of Thursday, he’s headed for the NFL.

“He’s not a finished product,” Wright said of Eason. “Ideally, he’d come in and be given a little time before being pressed into action. If he could sit for a year and adjust, that’d be great. But that’s harder and harder to do in the NFL every year.

“So he’s going to be a real wild card in this draft. The 2020 NFL draft just got a lot more interesting with him included in it.”