When Chris Petersen stepped down as Husky football coach in December, he expressed the desire to recharge, regain some balance in his life and reacquire the passion he felt had waned.

Seven and a half months later, Petersen believes those goals have been accomplished. And he’s ready to throw himself into an intriguing new position: The Fritzky Chair in Leadership at UW’s Foster School of Business, announced Thursday. 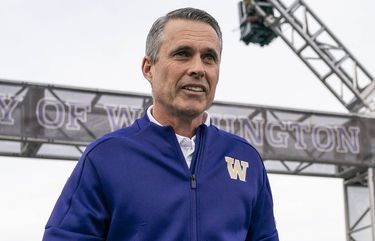 In one of his first extended interviews since his final game as Husky coach in the Vegas Bowl on Dec. 21, Petersen said the job allows him to explore elements of team-building and leadership that have always fascinated him. Now he can take them to a new realm away from athletics.

It was Frank Hodge, the dean of the Foster School and also the faculty athletic representative for football during Petersen’s tenure, who suggested to Petersen that this position would be perfect for him.

“I’m still very intrigued by all those things,’’ Petersen said. “That’s always such a unique puzzle to me. I still really want to research these things and talk to people I never had a chance to go see. Frank heard all those things, and said, ‘I think we might have exactly the thing that might be a great fit for you.’

“I’m excited to get on campus and get to know some of those awesome professors that I didn’t really get a chance to connect with when you’re in your football bubble.”

Since stepping down, Petersen had been serving as a “leadership adviser” in the athletic department. As with everyone else, the COVID-19 pandemic has wreaked havoc with his best-laid plans, forcing cancellation of a variety of professional development excursions as well as a trip he and his wife had planned to Europe.

“Which in the big picture is probably better,’’ he mused. “Because it really forced me to sit tight, and continue to think and read and research and write and talk to a bunch of people. So I’m really kind of still doing that. It’s good.”

During his farewell news conference, Petersen talked about his need for a respite from the pressure and grind of coaching, and that has proven to be as therapeutic as he hoped.

“This job of being a head coach in college athletics, it continues to grow and get bigger,’’ he said. “The time commitment just continually expands. To do that for such a long time and never have a break. … It’s not like you go on vacation and you’re on vacation. The phone is going to ring, and there’s a problem you’re going to have to solve.

“So it’s really hard to truly step back and refresh. After a time, not only does it wear and tear, but equally importantly, I don’t think a guy’s at his best when you don’t have a chance to really sit back and figure out how you continue to grow and progress, and the next cutting edge thing you’re trying to bring to your program. That’s a tough thing when you’re under that constant pressure.”

In Petersen’s final season, the Huskies went 8-5 with a win in the Vegas Bowl. That was deemed a disappointment, and in a frank assessment — which he says he does after every season — Petersen put the blame squarely on himself.

“We didn’t do as well as we should have because of me,’’ he said. “There’s no question about it. It starts with me.”

Pressed for specifics, Petersen said: “I think it starts with the leadership position, developing leaders on the team and the mentality of our team. The competitiveness of it. And also having more fun and enjoying that process. You start to lose a game or two you shouldn’t, and there becomes more pressure on everybody, and really it needs to go the other way.

“These kids, they feel what coaches feel. Sports are meant to be enjoyed and celebrated and appreciated. When that diminishes, I think that hurts teams. You can talk about sports, but I think you could also talk about work you’re doing in business. When you don’t have joy and celebration and all those type of things. It doesn’t seem right.”

This chance to delve deeply into leadership animates Petersen, 55. While the Fritzky Chair is a one-year post, there is flexibility to expand into a longer stint, he said. There is, of course, still the uncertainty of whether the UW will hold in-person classes in the fall. But Petersen isn’t sure if teaching in a classroom is how the job will manifest.

“I don’t think so, at this point,’’ he said. “It could be that, but with some of things I’m still chasing, I don’t know if that’s what I want to do — stand in front of the class and all that. I want to probably help guys and gals one on one, in kind of the mentorship-type role, at least moving forward here.”

Petersen says that more than half a year removed from being head coach, he has no regrets about his decision. He compiled one of the best career records (147-38) in the history of college football.

“No, not at all,’’ he said. “I really thought I was going to have that. Who knows? Football’s not going, so it’s easy for me. There’s nothing to look at and say, ‘Oh, I wish I was out there.’

“I just think, in my mind, it was such the right thing at the right time. Because I just know in my heart what I needed to do. Even however months later, I still feel the same.”

And Petersen feels empathy for his successor, Jimmy Lake, whose first head-coaching position has run headlong into the biggest medical crisis in a century. That, in turn, has thrown the immediate future of collegiate sports, especially football, into disarray.

“This is hard for anybody, let alone a guy who’s going to be the coach for the first time,’’ Petersen said. “But Jimmy is very smart, and he’s got a great staff around him. They’ll navigate it well. I know he’s energized and excited to be in that position. That’s what those position are. Any leadership position is about just solving problems. So he’s waited a long time to get in that position to go solve problems.”

And now Petersen will move over to the academic realm to help build leaders for the future so they, too, can go out and solve problems.

“I would tell recruits — I really believe Seattle is the business capital of the United States, at least in the years I’ve been here,’’ he said. “The stuff going on is phenomenal. So to get to know those people that are putting out these really good students, and the connections they have to the community — just to be part of that — is intriguing to me.”