In the second quarter of Saturday’s game inside Husky Stadium, former Washington quarterback Jake Browning was shown on the video board. Browning — who holds Husky records for passing yards, passing touchdowns, completions and victories by a quarterback, among many others — smiled, tipped his head back and polished off a beer.

Considering No. 20 Washington’s performance in a 13-7 defeat against Montana, he might have needed more than one.

Before bombarding UW in embarrassment Saturday, Montana held a 1-17-1 overall record against Washington. Its lone victory was an 18-14 final in Seattle on Oct. 16, 1920 — nearly 101 years ago. In their last meeting, UW scored 63 points and produced 506 total yards in a predictably dominant 63-7 victory in 2017.

Stone: UW delivered a stinker for the ages against Montana. Can they find a way to recover?

Saturday, in its first game in front of fans in 645 days, UW put together one of the most embarrassing performances in program history.

The fans — 64,053 was the announced attendance, though the actual figure was significantly smaller — probably should have stayed home.

There, at least, the alcohol is a whole lot cheaper.

“As extremely disappointed as (the fans) are, so are we — our whole team and our whole staff,” UW head coach Jimmy Lake said. “We wish this could have been a better outcome for them. I want to thank them for coming out. We’re going to go back to work and try to make sure they want to come back the next time. But this is extremely disappointing, and we’ll get better from this.” 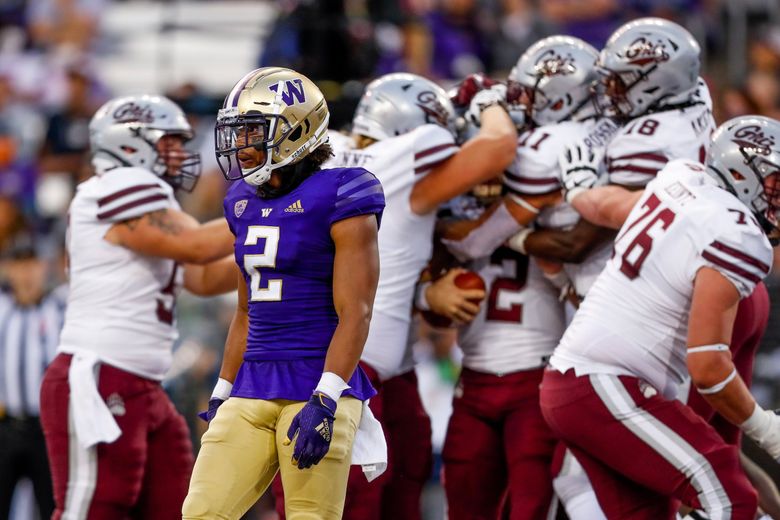 Offensively, at least, it would be literally impossible to get a whole lot worse.

Against a Montana team that lost its past two games against FBS opponents by a combined score of 98-10, Washington managed seven measly points. Those came on the opening drive of the game — a nine-play, 78-yard march that included 34 rushing yards by Richard Newton and a 1-yard quarterback sneak score by second-year starter Dylan Morris.

Specifically, Morris completed 27 of 46 passes for 226 yards and three interceptions — the last of which effectively ended the game on the Griz 33-yard line with 31 seconds left. And the Husky offensive line Lake called “extremely veteran, talented and deep” five days ago paved the way for just 65 rushing yards and 2.4 yards per carry, while allowing a trio of drive-deflating sacks.

“I wouldn’t say I’m shocked,” Lake said, after being asked specifically if he was shocked by the final result. “We had a lot of respect for coach (Bobby) Hauck and his team. We told our team all week long that this is a formidable opponent. It’s always one of the top opponents in the FCS. So I wouldn’t say it’s a shock.

“We did want a different result, obviously. We want to win all the games we’re matched up in. So whether it’s an FCS opponent or an FBS opponent, we want to win. But they played better than us tonight, so we’re not going to make any excuses. Credit goes to Montana.”

Yeah, yeah, credit goes to Montana. But it didn’t help that Washington’s top three wide receivers — Terrell Bynum, Rome Odunze and Jalen McMillan — were each unavailable, and Texas Tech transfer Ja’Lynn Polk left the game early as well. While McMillan injured his hand midway through fall camp, Bynum and Odunze were listed as starters on UW’s depth chart on Monday, only to be unexpectedly absent — like the rest of the offense.

After the game, Lake — whose policy is typically not to comment on injured players — said he’ll “talk about any possible injuries on Monday.”

But first, he was asked to talk about an offensive clunker the likes of which this stadium has never seen.

UW did so many things poorly, Lake couldn’t possibly list them all. Among them: placekicker Peyton Henry missed a 49-yard field goal attempt that would have extended the Huskies’ 7-3 first half lead as well.

And Washington’s defense got off to an equally unimpressive start, surrendering a 37-yard scamper by Montana running back Xavier Harris that led to a field goal on the Griz’s opening drive of the game. After allowing just 33 total yards over its next eight drives, Bob Gregory’s defense cracked again — to the tune of 10 Montana fourth-quarter points, via back-to-back drives of 69 and 42 yards.

“It stings. It stings,” repeated UW inside linebacker Edefuan Ulofoshio, the only Husky player who was made available for interviews. “It stings a lot, just because I know how hard this team worked in the offseason and what we wanted to do. To have an outcome like this, this isn’t what we wanted. So this stings a lot.”

Instead of answering, UW’s offense fully disintegrated. The Huskies’ three fourth quarter drives ended in a punt, a turnover on downs and Morris’ third interception of the night. Afterwards, Lake said he never considered making a quarterback change.

“Overall, I saw him putting the ball on some guys,” Lake said, when asked to evaluate Morris. “We’ve got to catch the ball better. Obviously he was getting harassed a few times and had a lot of pressure in his face. But again, a more deep dive into the evaluation of him is going to have to happen when we scour the tape.”

The tape will tell one story. The southeast corner of Husky Stadium will tell another.

Late in the third quarter, a “Montana Grizzlies” chant grew from the gradually believing section of road supporters. When it ended, the Griz paraded through the area adjacent to the east end zone — high-fiving the unexpectedly elated fans who made the trip.

At midfield, before a circle of Montana Grizzlies kneeled on the massive purple “W” in prayer, offensive lineman Moses Mallory and cornerback Justin Ford hugged and threw the “dubs down” sign in delirious celebration.

Meanwhile, in the first game where it was sold throughout Husky Stadium, Browning must not have been the only one who needed a beer.

And before UW meets Michigan in “The Big House” next week, Lake and Co. need to find some answers.