Michael Penix Jr. has long been a home-run hitter.

The fifth-year junior’s father, Michael Penix Sr., told The Times last spring that “we used to see him hit little baseballs deep, over the house, at the age of 2. If you pitched to him, he’d hit it.”

When given the opportunity, Penix doesn’t miss.

DeBoer added that Morris is currently the backup quarterback, though “Sam’s right there” in the competition. 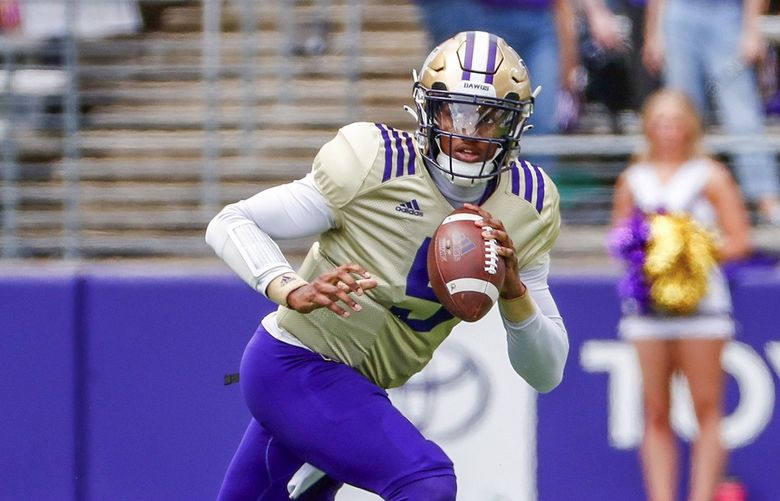 “(Penix) has just had a really great camp and he’s been consistent from the time spring ball started to where he’s at now. He’s done a great job earning it,” DeBoer said. “I’m excited for him to get those extra reps now, build that chemistry with the group. I think now he can take that next level of leadership.

“The thing I also really want to make sure I say is, I know Husky Nation all knows D-Mo (Morris) and Sam (Huard) and have seen them play. I can tell you that these two guys are different quarterbacks (than fans saw in the past). Once we got into week two and week three, you saw the offensive line get more comfortable and give them more time, and those guys have really been able to go to work and have some phenomenal days picking apart the defense at times. Those two guys are more than ready to play.

“But you go with who’s going to lead you up and down the field and who gives you the best chance to win a football game, and that’s Michael.”

DeBoer knows that better than most. UW’s debuting head coach served as Penix’s offensive coordinator at Indiana in 2019, helping the Hoosiers match their highest win total (8) in 26 seasons while producing the Big Ten’s No. 3 total offense. But DeBoer did emphasize Tuesday that his decision “was all about what he’s done here. Maybe coming in you know (what he accomplished at IU), and I’m aware of that obviously, because I’ve worked with him for a year. But it’s all about what he’s doing with the offense right now.”

Still, in a six-game stint partnering with DeBoer in 2019, Penix completed 68.8% of his passes — a program record — with 1,394 passing yards, 10 touchdowns and just four interceptions.

“DeBoer knew how to manage the game,” Penix Sr. said last spring. “He seemed like he knew exactly what to do in situations, and he could adapt. Because we both know that defenses do change. They try to mimic what you’re trying to do. It seemed like DeBoer had a little wrinkle all the time for defenses when they figured out what he was trying to do.”

Which made Washington a compelling option when Penix entered the transfer portal. The steady lefty said Tuesday that “I was just going with my heart. I just wanted to be somewhere where I felt I would be comfortable and be able to become a better person and a better player. I felt this was definitely the spot.

“Being under coach DeBoer once already, I knew some of the things he brought to the table and the way he wants things to run. I wanted to be a part of that, and I feel like it’s definitely going to be special.”

But how integral a part will Penix play? In 20 career games at Indiana, the two-time captain and 2020 All-Big Ten second-team selection completed 59.4% of his passes for 4,197 yards, with 35 total touchdowns and 15 interceptions.

But here comes the caveat.

Each of Penix’s four collegiate campaigns have ended with injuries — torn ACLs in 2018 and 2020, a sternoclavicular joint (connecting the clavicle to the sternum) injury in 2019, and an AC joint shoulder issue in 2021. He’s never played more than six games in a season.

Which means, while Washington’s quarterback competition is over, it isn’t really over. Though it’s admittedly a coaching cliché, Morris/Huard are one play away.

“All three of those guys were warriors throughout this whole process, and I mean that,” said offensive coordinator and quarterbacks coach Ryan Grubb, who broke the news to all three quarterbacks alongside DeBoer in individual meetings Monday. “All three of them handled it with class yesterday, exactly how I would expect them to. Dylan Morris was the first guy here this morning, ready to work. Very rarely does anybody beat Dylan here, and nothing changed.

“That was our advice to them: Show up and keep throwing punches. The only mistake you can make is to shut it down and stop throwing punches. I don’t expect that to change at all. I think all three guys are very confident in the progress they’ve made and their development. I mean that wholeheartedly. I think all three guys did get better from spring to now. I think they see that, and they know that their response is going to be critical, and they have to be ready.”

In 15 career games at UW, Morris has completed 61% of his passes, throwing for 3,355 yards with 23 total touchdowns and 15 interceptions. Huard also appeared in four games as a true freshman last fall, completing 22 of 42 passes (52.4%) for 241 yards with one touchdown and four picks.

As for Penix, the Tampa product isn’t particularly worried about being labeled “injury prone.” He acknowledged this month that “I’ve been hit before. I’ve taken a lot of hits and I’m still going to pop back up and keep going.”

It’s also up to Grubb to help minimize those hits.

“I think we’ve always historically — even when we’ve had athletic quarterbacks — protected the quarterback to where, if we’re going to run him, we’re going to make sure it counts and that it’s going to hurt the defense at the right moments in a game,” Grubb said. “He’s never going to be a 15-, 20-carry guy. We know that (injuries) can be a threat with multiple guys, especially with Mike. We just want to make sure we take care of him. His job is to throw the ball and command the offense.”

Ultimately, only one guy could get the job.

And after four season-ending injuries, and one transfer, Penix is still stepping up to the plate.

“Without a doubt, I feel like all three of us could lead this team very far,” he said, while Huard threw passes after practice in the opposite end zone. “But with me being named the starter, I’m just going to put in a lot of hard work. It’s going to take a lot of time.

“We’ve got game week coming up next week, but we’re definitely moving in the right direction, and when that time comes we’re going to be ready. I feel like we’re going to make a lot of special things happen here.”