On Friday, the five-star wide receiver from Steilacoom High School announced his verbal commitment to Ohio State over fellow finalists Washington and Oklahoma. Egbuka chose to announce his pledge on his grandparents’ 50th anniversary, according to 247Sports.com.

“I want to leave my mark on the game of football. And with this decision, I’m one step closer,” Egbuka said in a commitment video published on social media. “I would like to thank God, my teammates, coaches, and especially my family. They have driven me to heights I didn’t know I could reach, and I am very grateful. Without them, my vision would not be possible.

“I want to be known as the greatest this game has ever seen. I’m excited for what the near future holds, but I’m still far from done. This is just the next chapter in my vision. Go Bucks!”

The 6-foot-1, 190-pound Egbuka had an offer list that also included Alabama, Auburn, Clemson, Florida, Florida State, Georgia, LSU, Miami, Michigan, Nebraska, Notre Dame, Oregon, Stanford, Texas, USC and many more. He’s ranked by 247Sports as the No. 1 wide receiver nationally, the No. 8 player in the 2021 class and the No. 2 prospect in the state of Washington — behind only Eastside Catholic defensive lineman J.T. Tuimoloau.

And, when you look at his statistics, Egbuka’s national standing is unsurprising. In the 2019 season, he compiled 83 catches, 1,607 receiving yards, 25 receiving touchdowns, five rushing touchdowns, eight interceptions on defense and three pick-sixes and was named The Seattle Times state football player of the year. The All-American Bowl and Polynesian Bowl honoree recorded a 40-yard-dash time of 4.42 seconds in a 247Sports national combine in 2019, as well as a 35-inch vertical jump later the same year. 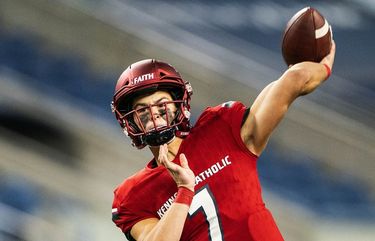 In a scouting report from April, 247Sports national recruiting editor Brandon Huffman wrote that Egbuka possesses “elite body control to go with optimal size and strength, with good top end speed and separation. Physical receiver, difficult to press but also takes advantage of any cushions given. Can adjust to each and every throw, take short passes the distance while also getting behind the secondary on deep routes. Strong hands, wide catch radius, will bring anything in range down. Consistently draws double coverage and bracket coverage and routinely gets open.

It goes without saying — though we still will — that Egbuka’s Ohio State commitment is a significant blow to Washington coach Jimmy Lake, wide receivers coach Junior Adams and the program at large. The Huskies’ 2021 class — which contains 15 commits and a single wide receiver, four-star Kennedy Catholic recruit Jabez Tinae — is ranked 27th nationally by the 247Sports Composite. The Huskies also sit fourth in the Pac-12 — behind Oregon, USC and Cal.

Of course, some of that ranking can be attributed to the Huskies having just 11 scholarship seniors and thus signing fewer recruits than many of its competitors.

Still, any way you slice it, Egbuka’s departure will undeniably sting. UW will almost certainly sign one in-state five-star talent next Wednesday, in Kennedy Catholic quarterback Sam Huard. But his most tantalizing potential target is headed out of town.

All things considered, a bad week for Washington just got worse.