Washington quarterback Michael Penix Jr. called it “a beautiful win.” For the Huskies, their 24-21 triumph over Oregon State on Friday was surely that, the signature victory of the Kalen DeBoer era and one that leaves a multitude of possibilities for even more glory ahead.

Certainly, it propels the Huskies into next week’s game in Eugene — one that would supplant this signature with a John Hancock flourish if they can knock off No. 8 Oregon — riding a wave of momentum and confidence. Penix might have to dig into Bartlett’s Quotations to find a way to portray the level of beauty if they pull that one off.

“I think this game does a lot for us,’’ said wide receiver Rome Odunze. “It gives us that confidence to carry into the (Oregon) game. I don’t know — beating one Oregon team has to mean something for the other, right?

“We know they’re going to give us their best, but being able to come out here and execute and have that gritty win, I think it builds character for us and creates more resilience for when adversity is going to strike.” 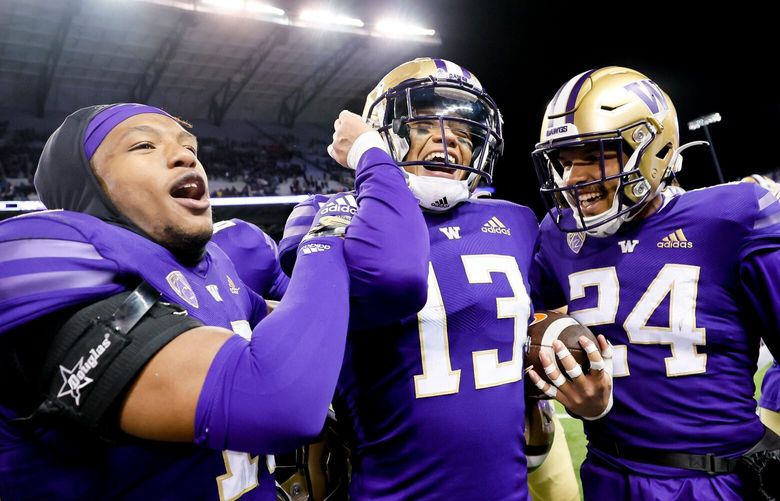 On a dark and stormy night — emphasis on “dark” during a 25-minute power outage in the fourth quarter that brought the game to a screeching halt at the precise moment of burgeoning momentum for the Huskies — it was also a bizarre, quirky win. It wasn’t sealed until there were a mere eight seconds remaining on as challenging a 22-yard field goal by Peyton Henry, considering the wind, as that short distance could possibly be.

Adversity? At one point, you felt Washington could have been trailing by two touchdowns if Oregon State had converted on two forays deep into Husky territory; but you also felt like the Huskies could have been ahead handily if not for an inopportune pick-six thrown by Penix in the first half, and a couple of crippling penalties that extended Oregon State drives. That’s where the resiliency came in.

It morphed into a tense game in which the inclement weather wreaked havoc with the offenses. Not that it reached worst-case scenario — there was no rain, and the wind was intermittent. Henry said that when he kicked in the lake end of the field, “I had to aim a little bit outside the left upright for it to curl back in, so it was definitely a tricky night to kick.” But Odunze said the weather wasn’t as destructive to the game plan as might have been expected.

“Honestly, it was kind of a relief,’’ he said. “I mean, some reports were like it’s about to be a hurricane over there. So we thought it was going to be way, way worse than what it was. So when it was just a little windy and a little chilly, we knew we could overcome that. And we did.”

Bludgeoned early by Oregon State’s running game, the Huskies stiffened considerably in the second half, buoyed by astute adjustments from their defensive staff at intermission.

“I was so impressed with the efficiency of the communication, and by the coaches, and then taking that into the locker room,’’ DeBoer said. “And it played itself out exactly how the coaches were portraying it to the defensive side of the ball.”

When the Huskies came up with a crucial stop late in the fourth quarter of a tie game, it came down to a do-or-die scenario when Oregon State’s punt rolled dead at the 3 with 4:25 left in the game. The Huskies knew, as Penix said, that if they had to punt to Oregon State, they wouldn’t get the ball back. And there was a distinct possibility, if the drive fizzled early and they had to kick into the wind from deep in their territory, it would set up the Beavers almost prohibitively to win the game.

It was, in essence, a season-defining drive — and the Huskies pulled it off with brilliance, marching 95 yards on 18 plays all the way to the 2, where DeBoer did something he said he had never done. On third down, instead of going for the end zone, he had Penix move the ball into a more favorable kicking position for Henry.

“It’s really hard for me to not try to score a touchdown,’’ DeBoer said with a rueful smile. “I really feel that’s the first time I’ve ever done that, where we intentionally center it to win a game.”

It was a drive in which the Huskies continued a game-long trend of converting on seemingly impossible third-and-long situations. It was a drive in which Penix, who had made an uncharacteristic careless pass that led to an Oregon State touchdown, manipulated the offense with precision and care, knowing a turnover would be deadly. And it was a drive that featured a brilliant, diving catch by running back Cam Davis to convert another crucial first down in Beavers’ territory.

“I’m proud of the way the guys were just resilient,’’ DeBoer said. “And there came a point where we got close to midfield, and we were like, OK, now we’re the aggressors. When you are backed way up, you’re worried about the punt into the wind, and how much time is going to be left for their offense. And then there came a point where we got out of our own territory, where you feel, this is now in our court.”

It was, as Penix said, a thing of beauty. That may be in the eye of the beholder, but in this game, it was in the eyes of the victors. And now they have visions of greater things ahead.