The NIL Era was underway.

Four months later, “Montlake Futures” was formed to maximize it.

A for-profit corporation unaffiliated with the University of Washington, Montlake Futures “was founded to provide a platform to directly develop and facilitate NIL opportunities for UW student-athletes, in cooperation with local businesses and sponsors,” according to a press release published Thursday. Local companies that have publicly endorsed “the formation and goals of Montlake Futures” include Alaska Airlines, Amazon, Costco, Nordstrom and Precept Wines.

Montlake Futures is supported by an independent advisory group of “local business leaders and friends of UW Athletics,” including UW alumni Pete Shimer and Neal Dempsey. Shimer — a former Husky basketball player, whose wife and four children also attended UW — is the chief operating officer of Deloitte, the world’s largest professional services and accounting firm by revenue. He’s also a past chair of the board of directors for the University of Washington Foundation and a board member for UW’s Foster School of Business.

Dempsey is the Managing General Partner of Bay Partners, which claims more than $2.5 billion in successful returns. He was named one of the top 100 venture capitalists in the world by Forbes in 2013.

Together, they aim to help provide a competitive advantage for their alma mater’s athletics programs. 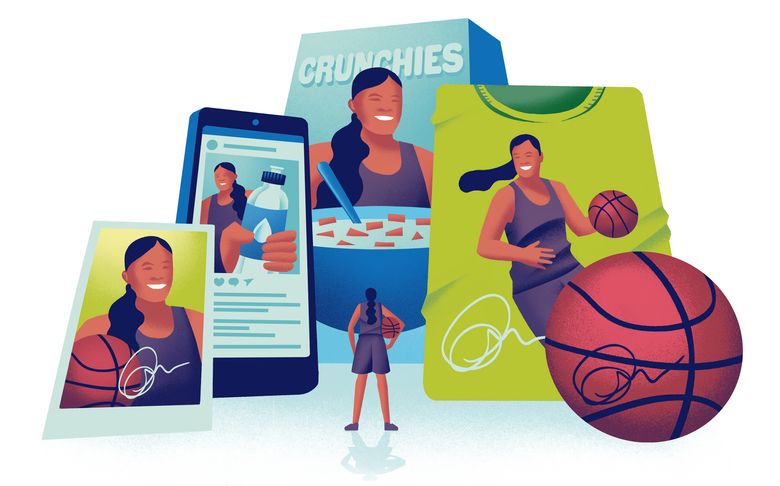 ‘It’s going to change the landscape of college sports forever’: How name, image and likeness laws will impact UW athletes

“It was really a recognition of the current landscape of college athletics,” Shimer told The Times on Wednesday, of the company’s formation. “With the July 1 decision by the NCAA to allow NIL as a thing that’s OK, we felt like we needed to do something — we being the group of friends and alumni of the university.

“As time went on, we felt like we were probably a little bit behind where some of the other schools were. It’s really a price of admission now in being in college athletics, that if you’re not providing avenues for NIL deals for student-athletes, you’re going to be at a competitive disadvantage. The idea really was spawned out of necessity and competitive advantage, really.”

Added Dempsey in a statement: “I’m thrilled to be involved in supporting Montlake Futures and NIL opportunities for student-athletes at the University of Washington. We have the ability to create some truly unique opportunities, both for our athletes and our corporate partners.”

UW, of course, is prohibited from affiliating with Montlake Futures or cultivating NIL deals for its athletes. In February, the university did, however, launch the Boundless Futures program — “a comprehensive personal, professional and leadership development program” encompassing NIL curriculum through the Foster School of Business and a partnership with brand-building platform Opendorse.

Meanwhile, Petersen — who coached UW’s football program from 2014 to 2019, then was appointed the Foster School of Business’ Edward V. Fritzky Chair in Leadership in 2020 — will attempt to infuse elements from both his Built For Life program and Boundless Futures into this latest venture.

“We’re a Power Five school that has a wealth of Fortune 500 companies that are branded and name-recognizable here in our backyard,” said Shimer, when asked how Montlake Futures will help provide unparalleled NIL opportunities. “We’re a hub of technology, obviously, with a number of branded companies in that regard. We’ve got a significant donor base, and we’ve got a number of committed athletes who are willing to invest back in the program. But the real differentiator that goes beyond all those things, that kind of ties it together, is this notion of making it more than transactional. We want to make it transformational for the student-athlete.

“That’s what Chris Petersen is all about. If we are able to align Built For Life with what the university has done from a Boundless Futures perspective — and create transactional deals for the student-athletes, and then get them acquainted with and partnered with the companies that we have here in town — I think you’ve got something that nobody else in the country can match.”

Perhaps not even Oregon — whose donors, NIKE co-founder Phil Knight included, announced a similar venture called “Division Street” on Sept. 30. (As for the on-field product, 4-4 Washington hosts the 7-1 Ducks inside Husky Stadium on Saturday.)

But for Petersen — who Shimer said “is going to participate with us actively” — Montlake Futures is intended to be more than a press release or a glorified recruiting tool.

“I am excited to be associated with Montlake Futures, which aims to build a lifetime of opportunities for UW athletes, both during their playing days and afterwards,” Petersen said in a statement. “I have always been passionate about the ability of college athletics to develop individuals to their full potential so they can lead successful lives beyond the playing field and contribute to the communities in which they live.”

As for the “Athletes Council,” Shimer said their degree of involvement will be established by each individual Husky alum.

“I think the athletes council really provides credibility to what we’re doing,” Shimer said. “I’ve had personal conversations with the athletes that are on the council. They’re interested in providing counsel, guidance, advice to the student-athletes on the prospective deals. Each of the individuals on the athlete council will determine how deeply they want to be involved with the program.

“Obviously they all have connections back to the university and the individual sports that they played. But I think the great thing about all of these people on the council is they care deeply about the experience that they had at the university, and they want to allow for the current student-athletes to have an enhanced experience and do the best they can with their own experience to make theirs better.”

Emmy Armintrout — who served as UW Athletics’ NIL coordinator from May 2020 through January 2021 — has been appointed Montlake Futures’ executive director and general manager. Armintrout earned a bachelor’s degree from Stanford and her MBA from UW’s Foster School of Business. She also co-founded Rivall, a management and marketplace platform for adult sports that was sold in 2019.

On Wednesday, Shimer reported that Montlake Futures — which, he added, has been officially registered with the state — is “open for business.”

And in the NIL Era, UW’s ties to the city of Seattle may soon pay dividends.

“I think Seattle is a really fertile ground (for NIL deals) because of the diversity of opportunities that we have here,” Shimer said. “You’ve got multiple layers of opportunities, from the Fortune 500 companies to the local companies to all of the individual donors who want to participate. So I think having the optionality of different sizes and scales of companies just creates more opportunities for individuals.”