The increasingly frustrated, thoroughly stunned, and then justifiably angry and disillusioned fans at Husky Stadium on Saturday were surely asking themselves: “We waited 645 days for that?”

It was a stinker for the ages that absolutely no one saw coming, but everyone could see brewing as the night progressed. Every bit of optimism and hope that greeted this Washington football season was eventually sucked dry during a Husky performance as wretched as any you could cite as a comparison.

If you want to say the resulting 13-7 loss to Montana was the worst in program history, who’s going to argue? It was a gut-punch of epic proportions that will either shock the Huskies into a revival, or be so demoralizing that it will be hard to recover. 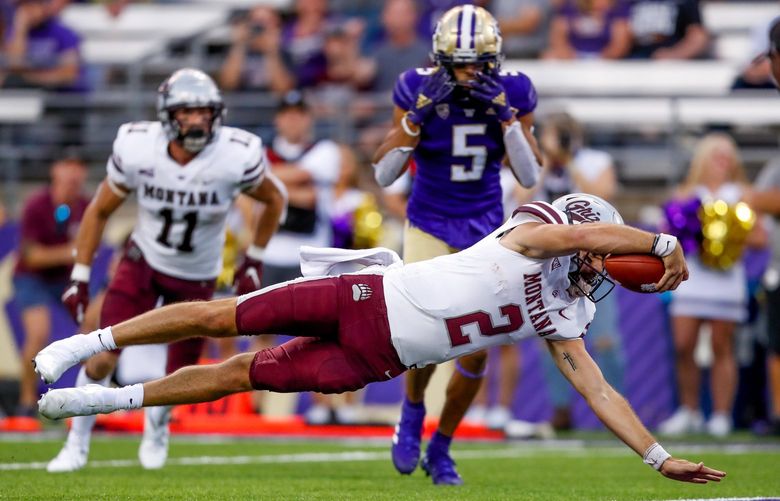 For now, stifle those lofty expectations that have bubbled up all summer. This Husky team was out-played, out-coached, out-toughed and then out-celebrated by a Griz team that headed back to Missoula on a cloud of euphoria.

Husky coach Jimmy Lake has boldly stated his team’s goal each year should be no less than winning the Pac-12 title and playing in a major bowl. But based on their performance Saturday, the Huskies would struggle to win the Big Sky.

That’s not to say that better things aren’t ahead for the Huskies, though it’s hard to immediately come up with a good reason for that statement. Except for this: It can’t get much worse.

It can be said with utter Captain Obvious certainty that Washington needs to massively step up its game if it wants to win the showcase showdown next week against Michigan at the Big House.

Check that: UW needs to massively step up its game to compete with Arkansas State in two weeks.

Mind you, this wasn’t one of those fluky upset wins that comes by virtue of a trick play or a bad call by the refs. Montana was the better team in every aspect.

I covered the game in 1985 at Husky Stadium when Oregon State upset Don James’ Huskies, 21-20, as 38-point underdogs — at the time the biggest upset by betting line in NCAA history.

I’m here to tell you that this game was more shocking – a butt-whipping of the 20th-ranked Huskies by an FCS school that deserves every one of the accolades that are now going to flood its way.

“Just not good enough,’’ responded Husky linebacker Edefuan Ulofoshio when asked to explain what had just happened. “It stings. It stings a lot, just because I know how hard this team worked during the offseason, and what we wanted to do. And to have an outcome like this, it isn’t what we wanted. So it stings a lot.”

That was also the word used by Lake, who denied that the Huskies overlooked Montana but struggled to come up with an explanation for the tepid performance that played out.

“This is going to sting all of us,’’ he said. “You can feel that by the way the guys were interacting in the locker room. We didn’t lose confidence. We just know we’ve got to play better. We’re going to have more of an urgency, obviously, to get things done. And then us as coaches, we’ve got to coach better. We’ve got to make sure that we build a plan, so all three phases of our team can play better than we did tonight.”

You could see the life sucked out of Washington as the game progressed. You could simultaneously see the spirit and confidence grow for the Grizzlies, who came in as 23.5-point underdogs and left with the bravado that comes with knowing you manhandled your foe.

This game was supposed to be a breeze for Washington, a stress-free tuneup to allow the Huskies to clear their throats before the marquee event next week. But to the shock of the restless fans who were girded for a laugher after a season away from the stadium, the Huskies couldn’t muster a response when Montana took the lead with 10:34 left in the fourth quarter.

That breathless anticipation for the return of fans at Husky Stadium for the first time since the Apple Cup on Nov. 29, 2019? By halftime, it had devolved into a smattering of boos as Washington headed to the locker room clinging to a 7-3 lead. The boos would gain in force as the Huskies’ offense continued to flounder and then fade for good.

On their opening possession of the game, the Huskies had marched down the field with precision and ease. The 78-yard drive ended with a 1-yard TD run by quarterback Dylan Morris, and it seemed as if the rout was on.

But from that point on, the Husky offense – playing without their top three receivers, none of whom suited up – fizzled and then flopped. They had no rhythm, no flow. Morris struggled to establish chemistry with the remaining core of receivers. After picking up 78 yards on nine plays on their opening drive, the Huskies were shut out the rest of the way.

It was a shocking display of mediocrity after an upbeat training camp that ended with soaring hopes. Most alarmingly, the seasoned and touted Husky offensive line was neutralized by Montana’s defensive front. The Huskies had drives start at Montana’s 44 and 39 in the first half but couldn’t score on either.

That vaunted stable of Husky running backs, which was supposed to provide a multitude of prosperous options? None of them got untracked. Morris, who finished with three interceptions, was often off-target, and so ineffective that I fully expected to see either Patrick O’Brien or Sam Huard in the fourth quarter. Lake, however, said he never considered changing quarterbacks.

The Huskies desperately need to change something. This will be a week of program-wide soul-searching to find what was missing Saturday, and somehow bring it back in Ann Arbor. That Michigan game was always going to be important; now it looms as absolutely essential for the Huskies if they want to salvage this season. That’s a crazy thing to say after one game, but that’s just how crippling this loss was.

“We’re not going to say, ‘Oh, we lost to Montana, season’s over,’’ said Ulofoshio. “We have 11 more games guaranteed. We’re going to try to win all of them.”

The Montana game was supposed to be one of the gimmes. Instead, it brought one of the darkest nights the Huskies have ever had.