That’s the word Ikaika Malloe used on Dec. 8, 2020, when asked about the play of his defensive line. Three days earlier, Stanford — which entered the game ranked dead last in the Pac-12 in rushing offense (120.67 yards per game) — stampeded the Huskies for 191 rushing yards, 4.8 yards per carry and three rushing touchdowns in a 31-26 victory. That’s the same Stanford team, by the way, that was forced to spend the week sleeping in Seattle hotels and practicing at local high schools after being expelled from its own campus due to COVID-19 protocols.

Plus, that underwhelming output was far from a fluke. Excluding a walkover 44-27 victory against winless Arizona, Washington surrendered an average of 191 rushing yards and 4.94 yards per carry against its three other opponents — Stanford, Utah and Oregon State. 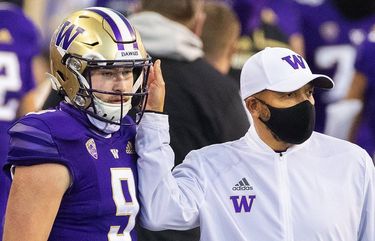 Can UW’s passing attack take a significant step in 2021?

And yet, the Huskies were 3-1 anyway — preparing for a game at rival Oregon on Dec. 12 that would decide the North division’s representative in the Pac-12 title game.

“Ultimately it comes down to details and the techniques of what we’re teaching and what is not being executed,” Malloe said on Dec. 8. “As a coach I take that personal, because I think that’s a direct reflection of (coaching). I think when the defensive line is playing horrible, that’s solely on me. My job is to make sure that doesn’t happen this weekend.

“That started on Sunday. We were hitting sleds the day after a game to make a point. I look forward to those guys being really physical this Saturday against our rival.”

Of course, the Oregon game was subsequently canceled due to a COVID-19 outbreak inside UW’s football program — abruptly ending the Huskies’ season.

But, as spring practice starts Wednesday, the question remains:

Can UW’s defense stop the run?

At their best, the Huskies always have. Consider UW’s run defense numbers since Chris Petersen arrived in Seattle in 2014:

When UW has stopped the run, it has done so with a dominant defensive lineman. Danny Shelton turned in 93 tackles, 16.5 tackles for loss, nine sacks and five fumble recoveries in 2014, before being selected 12th overall in the 2015 NFL draft. Vita Vea was named a second-team All-American in 2017, before (ironically) going 12th overall as well. Greg Gaines was a first-team All-Pac-12 performer in 2018, before being selected by the Rams in the fourth round of the 2019 draft. And Onwuzurike — a 2019 first-team All-Pac-12 selection — could be the first interior defensive lineman off the board in the 2021 draft this month.

Because Jimmy Lake’s defense places such an emphasis on sub-packages and bonus defensive backs, a dominant defensive lineman is required to take on double teams and create chaos up front.

But does Washington have a dominant defensive lineman on its roster?

“I think a lot of guys are going to step up,” Onwuzurike said at his pro day last week. “I think (Sam ‘Taki’ Taimani) and Tuli (Letuligasenoa) are working this offseason to step up. So I’m expecting good things. We’ve got young guys who are good. We’ve got (Jacob) Bandes, Draco (Bynum), (Faatui Tuitele). So I’m excited to watch them.”

The most obvious breakout candidate seems to be the 6-foot-2, 305-pound Letuligasenoa — who missed most of the 2020 season with an injury. In the same interview Dec. 8, Malloe said he expected Letuligasenoa to play “his best game” against Oregon.

“He’s kind of gotten a lot of the rust off, and his confidence is back,” said Malloe, who has since switched from the defensive line to outside linebackers. “He’s ready to go again. He’s built the confidence back up in our room. Those guys were depending on Tuli, and so were we. So I’m really looking forward to him shining this Saturday.”

Perhaps, with a healthy offseason, the redshirt junior will still shine. And besides Letuligasenoa, Taimani, Bandes and Tuitele are all former four-star recruits who have yet to make a sustained impact on the Pac-12 level. It’ll be up to first-year defensive line coach Rip Rowan — who had never previously been a full-time position coach — to convert his pupils’ potential into tangible production. UW is also breaking in a new defensive coordinator in inside linebackers coach Bob Gregory.

But run defense doesn’t depend solely on the defensive line. It also requires inside linebackers to shed blocks, attack gaps and consistently bring down ball carriers — which Edefuan Ulofoshio certainly did last season.

In his first fall as a full-time starter, the 6-foot-0, 230-pound Ulofoshio led the Huskies with 47 tackles — 20 more than anyone else — and added four pass breakups, two fumble recoveries, one forced fumble and one sack. He was named an All-Pac-12 second-team performer and a Pro Football Focus and Phil Steele second-team All-American.

But beside Ulofoshio, junior Jackson Sirmon struggled to stand out. And, as spring ball starts, a litany of linebackers — including junior MJ Tafisi and sophomores Alphonzo Tuputala, Daniel Heimuli, Josh Calvert and Miki Ah You — will be looking to make a positive impression.

If we take a wider look, Lake’s defensive scheme is designed to eliminate explosive passing plays — and UW has done that throughout the past seven seasons.

But UW led the Pac-12 in scoring defense and total defense for four consecutive years, from 2015 to 2018, because it simultaneously and consistently stopped the run.

That’s the critical statistic — and a question that needs to be answered.