“There’s a lot that goes into it,” he said, following the Huskies’ season-opening 45-20 win over Kent State. “You go back to day one, where you’re trying to figure out who your staff is going to be and trying to keep these guys that are out here making plays on the roster when things are in limbo and they’re trying to figure out what’s best for them. There’s just all those little stories that happen and exist and those relationships that are stronger because of the hard things that we went through in December and January, where we really had to have some hard conversations and show what this might look like down the road. 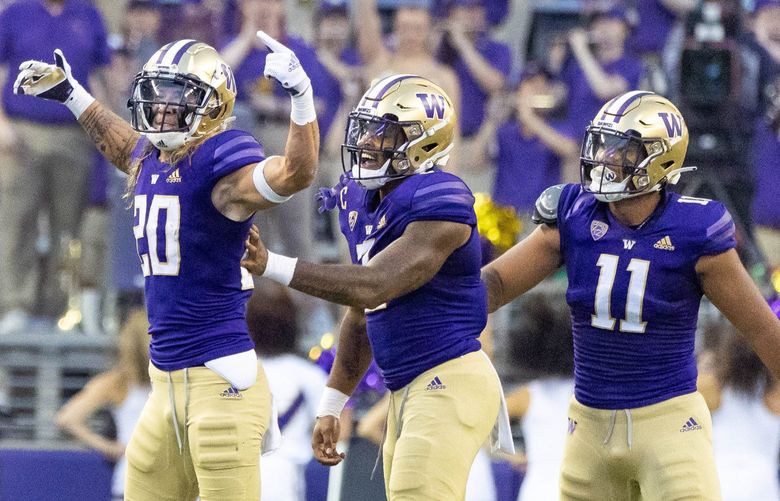 Saturday’s proceedings offered some of both. Of course, there was the dazzling parade of positives — quarterback Michael Penix Jr.’s 345 passing yards and four touchdowns, on 67% completions; safety Asa Turner’s pair of interceptions; a whopping 10 pass catchers’ inclusion in the Husky offense; UW’s back-to-back first-quarter, fourth-down conversions; an inexperienced offensive line’s flawless pass protection; a defense that held a high tempo Kent State rushing attack to 3.8 yards per carry; and a team that averaged 6.7 yards per play.

There was also that pesky aforementioned adversity — like a left leg injury to starting corner Jordan Perryman, who was replaced by safety Julius Irvin. Or scuffling special teams units that surrendered kickoff returns of 52 and 28 yards, and coughed up a Giles Jackson fumble as well. Or a 47-yard Collin Schlee touchdown to wide receiver Devontez Walker, who scooted past cornerback Mishael Powell. Or a Husky pass rush that came close consistently … but only mustered a single sack.

This was not a masterpiece.

And in the aftermath, DeBoer put his arm around Penix — a fifth-year junior quarterback who followed his former offensive coordinator more than 2,300 miles, from Bloomington, Indiana, to Seattle — and the pair walked up the northwest tunnel inside Husky Stadium. “Purple Rain” blared through the open doors of the home locker room.

“I just trust him,” Penix said of DeBoer a few minutes later. “When I was playing under him [at Indiana in 2019] I felt really comfortable. When I got here on my visit [this offseason], seeing the film on the guys here, I knew there was something special here, and I wanted to be a part of it.”

Not everybody did. After arriving this winter in Jimmy Lake’s wake, DeBoer’s first task involved re-recruiting the Huskies’ roster. A half-dozen Huskies left anyway.

On Saturday night, those that stayed huddled around their new head coach while sixth-year safety Alex Cook awarded an unexpected game ball.

“That win was hard to get. We’ve been grinding since winter, but to be honest, all the operation stuff … it’s because of this man,” Cook said, pointing to DeBoer. “Everything has been crisp, has been tight. Our operation has just been second to none. We couldn’t have gotten that win without coach DeBoer. I’m getting emotional as hell, because I’ve been here for six years, and … man, that’s just special. I appreciate you, Coach. Game ball!”

What followed, unsurprisingly, was a chorus of woofs.

As well as a coach who was lost for words.

“I wasn’t expecting it,” DeBoer said in the postgame news conference a few minutes later. “I’m so proud of these guys. There’s just great relationships being built right now, and there’s great trust. It’s something that none of us take for granted. AC [Cook] said some things in the locker room that I know mean a lot to me, just about the leadership that not just myself but the staff are providing and trying to show these guys.

“Even before we had a chance to do that, these guys were willing to open their arms up to us and let us in and let us coach ‘em up. That’s hard to do, especially with the roller coaster they’ve been on.”

That roller coaster may still have a few more drops. This team is far from perfect. But as he soaked up his surroundings on Saturday night, DeBoer couldn’t help but smile.