Now, you’ll have to forgive UW’s first-year coach for mixing sports metaphors. But even on a football field, his intention was obvious. In offensive coordinator John Donovan’s physical, downhill, pro-style scheme, the Huskies are developing bigger backs to effectively batter opposing defenses.

Consider that, in 2016 and 2017, Lavon Coleman was the only UW running back to eclipse 200 pounds. Likewise, Kamari Pleasant (204 pounds) assumed that mantle the following season. And last fall, Pleasant (213) and Richard Newton (210) were UW’s resident “big backs.”

Oh, and look beyond the current roster, and 6-0, 213-pound bruiser Caleb Berry is committed to the Huskies in 2021.

Essentially, Lake and Co. are stockpiling a stable of running back wrecking balls.

And that’s also true at a plethora of positions.

“We like big people across the board, on both sides of the ball, and big running backs are tough to stop,” Lake said. “These guys are putting on weight. Naturally they’re already big guys. Our strength staff has done an unbelievable job of making sure their meals are correct and their conditioning is correct. But even moving forward when we’re recruiting, we like these big backs that like to pound the ball and make it really hard on defenses to tackle – especially in the fourth quarter. So you will definitely continue to see us recruit those types of running backs, and other positions as well.

“You see the DBs. We always like long guys, bigger guys. I believe we have one of the biggest O-lines in the country – for sure in the Pac-12. We like big people. They don’t let heavyweight fighters fight lightweight fighters.”

But set the measurables aside, and these maulers can really move.

“We really have about four guys over 330 (pounds) right now, and I feel pretty confident in saying that they can all move their feet at that size,” UW offensive line coach Scott Huff said. “We do have a lot of guys that are right at that 300-320 mark. We did want to recruit big guys, but first and foremost they have to be able to move. So far those bigger guys have done a nice job.”

“MJ’s got the rugby background and he really can move for a big guy,” Huff said of his seismic redshirt sophomore. “You think 355 pounds, it looks like he’s got two tree trunks for legs, and he can move. We’re trying to get him up to speed with the different schemes and playing fast off the ball. But he really is a pretty special athlete. He can run, catch. He’s not your typical 355-pound o-lineman, and we’re obviously excited about MJ.”

Now imagine that mountain tearing like a tornado through defenseless defenses.

Of course, there’s a balance to maintain as well. At 5-7, 175, senior Sean McGrew should serve as an ideal change-of-pace back. Newton (498 rushing yards and 11 TDs in 2019), McGrew (342 rushing yards and 6.2 yards per carry), Davis and Pleasant could all realistically split reps in a seven-game season.

As he continues to mold his roster, at running back and beyond, Lake wants to foster size without compromising athleticism. 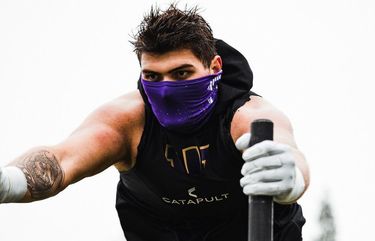 “The bigger and more nimble, the better, across the board,” he said. “Vita Vea: huge but nimble. Trey Adams, Kaleb McGary: big, but nimble. We don’t want just big guys that can’t move. Definitely at the running back position we want big guys that can also catch the ball out of the backfield and make guys miss in the hole and also out in space. I think that’s what we’re always looking for: big guys, tall guys, heavy guys that are fast and athletic.”

In other words: Lake is looking for Husky heavyweights.