By now, all remnants of the offensive eyesore put forth by the Huskies last season should be wiped from the memory banks. This is a Washington team that can move the ball with precision and guile, filled with playmakers and guided by a quarterback who even on what appeared early to be a comparative off day — emphasis on comparative and early — still is in complete control.

And Saturday, the Huskies put forward a defensive effort against Stanford that was tough enough and aggressive enough to warm the hearts of Don James aficionados. They harassed Stanford quarterback Tanner McKee all night, effectively nullifying concerns about an inexperienced secondary.

Four games in, we are still in the process of learning exactly who these Huskies of Kalen DeBoer are. But the answers that are slowly emerging, bolstered further by Saturday’s 40-22 win over Stanford that kept them undefeated at 4-0, could hardly be more encouraging. 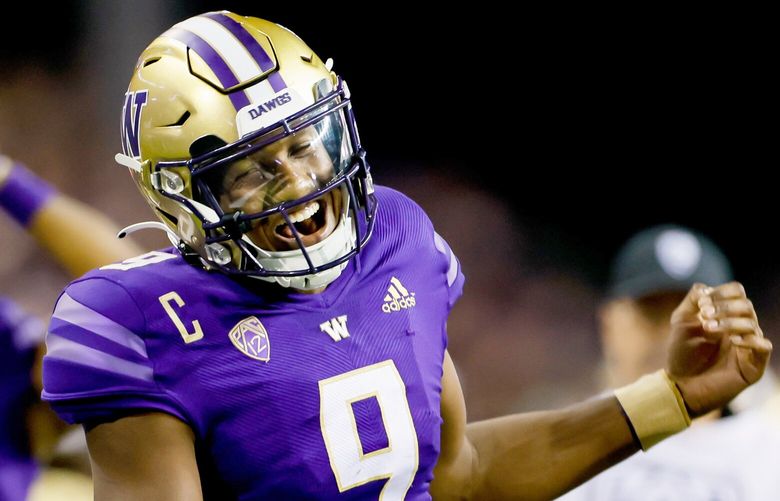 Already, Washington has matched last year’s win total that stayed static through four straight losses to end the season. Two of those bookended defeats — to Oregon in a game that cost former coach Jimmy Lake his job, and to Washington State in an Apple Cup game that cost the Huskies more than a modicum of pride — left a particularly bitter taste.

But the taste so far this year has been sweet indeed. Many challenges remain to be surmounted before one can declare this a championship caliber team. They have done nothing to dissuade one of that notion, however. It can be said with the conviction of a growing body of work that the 2022 Huskies are very good, indeed, and getting better.

Facing a Stanford team that more than held its own in its last game against USC on Sept. 10, and which has shattered many a Husky dream in years’ past, Washington was dominant. From the moment they stuffed the Cardinal on their opening drive and turned around with a systematic scoring drive of their own, the tone was set. And that tone remained unchallenged, even as the Huskies adjusted the treble and bass and blasted their music at full volume.

What’s more, and this is important, the Huskies are far more fun this year. Granted, that is a natural byproduct of winning, and there might come a day when the fun is sucked out of them by a superior ballclub.

For now, the watchability quotient is high. The offense of new coordinator Ryan Grubb is multifaceted and complex enough that it has seemed one step ahead of the opposition most of the time, whether the foe is a touted Big Ten team such as Michigan State (which is less touted by the week) or a traditionally troublesome one such as Stanford.

As wide receiver Rome Odunze said after his career day — a feat which seems to be rotating around the receivers room — they’re still trying to figure out who exactly is the Huskies’ Wide Receiver One.

“I mean, everybody can get the rock and everybody contributes,” Odunze said. “And we believe in each other, and we’re happy for each other … So we’re gonna keep moving forward and keep defenses guessing and be a whole unit.”

Penix on Saturday had some trouble in the first half connecting on long passes down the field, which had been money in previous weeks. But he had one throw for the archives, an across-the-field 30-yard touchdown strike to Odunze, who made a beautiful grab in traffic. That no doubt caught the eye of Seahawks’ general manager John Schneider, who was in attendance along with a complement of NFL scouts. Penix added a 61-yard completion to Odunze, and a TD pass to Giles Jackson. His stat sheet at the end was once again exemplary: 22 of 37 for 309 yards and two touchdowns. Odunze had eight catches for a whopping 161 yards.

DeBoer, asked if the Husky offense is exceeding his expectations, replied, “Overall, when you look at the four games, I would definitely say that’s the case. But I think I would look at different times today and say, we just sputtered. But it’s all relative, right? We have extremely high expectations for what we do offensively, defensively … I’m extremely proud we’re putting up 40 points, and knowing that there’s more out there that we could have had.”

One of those lingering questions coming into the game had revolved around the Husky running game. But Wayne Taulapapa, the transfer from Virginia, turned in his first career 100-yard rushing game (as Odunze did on the receiving end).

On defense, the Huskies made a loud statement with their pass rush, with Bralen Trice and Alphonzo Tuputala each getting two sacks. It was a Jeremiah Martin sack that jarred the ball lose from McKee, recovered by Faatui Tuitele in a pivotal moment in the second quarter that changed the tide of the game. On UW’s subsequent possession, Taulapapa romped 34 yards for a touchdown that gave the Huskies a 17-0 lead.

If you’re looking for nitpicks, the Huskies left some points in their pocket, evidenced by the four Peyton Henry field goals. And after letting Michigan State score two touchdowns in the fourth quarter last week, they gave up one to Stanford early in the fourth on Saturday that gave them at least a whiff of hope.

That was quickly and decisively snuffed out, however. But what was left Saturday for the Huskies was a whole new world of hope.