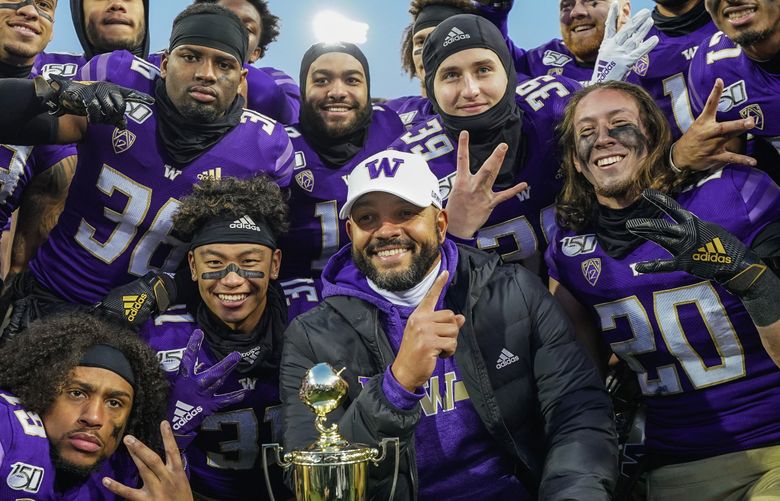 The plan, dropped like an oversized anvil on an unexpecting world Monday, is for Chris Petersen to coach through the Huskies’ upcoming bowl game, then officially pass the Washington whistle to his stated successor the following day. At which point Lake — currently UW’s second-year defensive coordinator — has what athletic director Jen Cohen called “the opportunity and responsibility” to make any staff or systematic changes he sees fit.

The problem? UW is set to sign 21 verbal commits (so far) on Dec. 18, the NCAA’s early signing day, before any further program changes have been publicly announced. The Huskies’ 2020 class is currently ranked 16th nationally and second in the Pac-12, behind only Oregon. And of its nine four- or five-star commits, eight reside on the offensive side.

So, sure, Lake has to focus on winning a bowl game.

But it may be even more important that he wins the next two weeks.

Jimmy Lake is Washington’s next head coach. Now what?

“I think the biggest issue is what’s going to happen with the offensive coordinator, and (Lake) saying there’s not going to be any changes made until after the bowl game,” said 247Sports national recruiting editor Brandon Huffman. “Well you’re now past the early signing period at that point. So their hope is that these (offensive) guys will trust what he’s telling them, that he’s going to either retain Bush (Hamdan) or he’s going to make a new hire.

“So that’s really the biggest thing I think he’s fighting, is keeping those offensive guys in the mix with uncertainty really looming over them for a couple more weeks.”

Immediately after Monday’s announcement, Lake and Petersen went to work to sooth that uncertainty. Four-star offensive line commit and Ferndale product Geirean Hatchett said he and a friend were in calculus class when they got the news, and “our jaws just dropped and we had wide eyes and were kind of stunned. It was very weird at first.” But offensive-line coach Scott Huff texted Hatchett and the rest of UW’s o-line commits shortly thereafter, emphasizing that he was not leaving the program and the majority of Petersen’s methods would be maintained.

Lake and Petersen both spoke with Hatchett on the phone in the next few hours as well, and Lake and Huff followed up with an in-home visit on Monday night.

Lake’s message, according to Hatchett:

Hatchett said, even during that especially confounding calculus class, his commitment to UW didn’t waver. Likewise, his parents “were still pretty sold at that point, but then after talking with (Lake at the in-home visit) I think they were 100% locked in, just like I have been since the news broke.”

That applies to three-star Brush Prairie standout and UW wide-receiver commit Sawyer Racanelli as well. Like Hatchett, Racanelli has spoken with both Lake and Petersen since the announcement. And, unsurprisingly, Lake’s message was consistent in both calls.

“He was just saying that everything was going to stay the same,” Racanelli said. “The foundation that coach Pete’s built is going to stay the same — the Built For Life (program), the OKG kind of stuff. He just wanted to let me know that, ‘Hey, I know this is kind of hard to process. It’s a big change. I just wanted to make sure you were 100% with this program. If you need time to think about it, that’s totally fine. Just make the best decision for you.’

But is that the case for every member of UW’s 2020 class? Hatchett did say that “the feel that I’ve been getting is that everybody is still 100% locked in, on board. For our o-line group, I know that’s 100% true. Myles (Murao) had his home visit last night. I talked with him after that and he said he’s still 100%. Same with Gaard (Memmelaar) and Roger (Rosengarten) and Sam (Peacock). They’re all still locked in.

“Same with the rest of the guys in our big all-commit group chat that we have. They’ve been saying that they’re locked in and solid, so I have no reason to not believe that.”

Still, there’s some uncertainty surrounding four-star UW quarterback commit Ethan Garbers, who declined to comment for this story. Garbers’ primary recruiter has been Hamdan, UW’s offensive coordinator and quarterbacks coach. So any hesitancy to sign early with the Huskies, considering Hamdan’s tenuous employment status, would certainly be understandable.

It was expected that Lake and UW wide-receivers coach Junior Adams would have to work to maintain the commitments of four-star recruits Jalen McMillan and Rome Odunze as well. Huffman said, “I don’t think any of the offensive linemen are showing any willingness to waver, but I can guarantee you that the receivers are getting hit up by everybody, because they’re elite receivers.”

McMillan — a four-star prospect from Fresno, Calif. — quelled those concerns Tuesday, tweeting, “They trippin’ if they think i’m leaving! GO DAWGS”. He later told 247Sports that “I’m a solid, 100% Dawg and I’m looking forward to the opportunities of playing at Washington and being able to change the program, and giving the fans what they want and need.”

They trippin’ if they think i’m leaving! GO DAWGS 🤞🏽

Of course, this is still Speculation Season, and the opportunities to do so are particularly appetizing on social media. Racanelli acknowledged that “the bigger recruits, who are higher ranked are probably going to hear from other schools, just because it is a big change. But I think the majority of us, if not all of us, are still 100% in.”

And let’s say that UW does sign all 21 commits (as well as, perhaps, a trio of uncommitted four-star prospects in cornerback Jacobe Covington, tight end Jack Yary and defensive lineman Xavier Carlton). What would that mean for Lake as he enters his first season as a head coach on any level?

And, more specifically, how might it influence a 2021 class that Huffman called “kind of unprecedented in terms of the in-state talent”?

“If you hold on to those guys (in 2020) that gives you momentum going into next year, because then you have an uber-elite quarterback (in five-star UW commit Sam Huard) coming in,” Huffman said. “You’ve got a chance to get another elite in-state receiver in Emeka (Egbuka). You’ve got a top-50 player in Julien Simon. They’re in the mix and on the short list for (California wide receiver) Troy Franklin.

“So they could realistically get four or five top-50 type of guys in the 2021 class if they can keep the momentum this year.”

And Huffman left out perhaps the most tantalizing target. A year after five-star Kennedy Catholic outside linebacker Sav’ell Smalls is expected to sign with the in-state Huskies, another prospect — Eastside Catholic defensive tackle J.T. Tuimoloau — is ranked as the No. 1 player in the nation by 247Sports.

For Lake, landing Tuimoloau would be momentous in more ways than one.

“I think if you look back to when Chris Petersen took over, it was fascinating because Budda Baker committed to Oregon I think two weeks after Pete was hired, then ultimately ended up back in the fold,” Huffman said. “I think that was super significant, because where (Steve Sarkisian) was bleeding in-state, I think Budda really helped show the players that Pete was targeting that in-state kids could stay at home and flourish. He got his signature recruit in that class with Budda.

The next step in UW recruiting, according to Huffman, is to beat national programs for elite West Coast prospects outside of the state of Washington. It’s to topple Texas and Georgia for a guy like Saguaro (Ariz.) High School five-star corner Kelee Ringo. It’s to fend off the SEC for the likes of four-star Clovis, Calif., running back Kendall Milton. It’s to do all of that while also continuing to dominate in-state. It’s to trade in top-15 classes for top-10 classes.

And Jimmy Lake may be just the guy to help the Huskies do it.

“I think it’s going to really help them (with recruiting),” Huffman said of Lake’s promotion. “I think a perfect example — and I know Husky fans will hate me for making this example — but just look down the road at what (Oregon coach) Mario Cristobal did. He was known as an intense recruiter when he was at Alabama. He was the national recruiter of the year under Nick Saban (in 2015). He comes in with one year under Willie Taggart and was really instrumental with their recruiting efforts in that (2017) class, and then he gets into the big chair and the recruiting efforts got ramped up even more, because he understands how important recruiting is.”

Lake, too, understands how important recruiting is — and that includes the next two weeks.

Before he can win a game at Washington, Lake needs to win on signing day.

“The (program’s) potential is unbelievable,” Lake said after being introduced Tuesday. “We were coming off three seasons in a row where we won 10 games, and then this year obviously we took a little bit of a step back.