Sixth-year senior outside linebacker Ryan Bowman will miss the remainder of the season with a shoulder injury, a source confirmed to The Times. The 6-foot-1, 280-pounder has played through a variety of injuries since training camp — starting all seven games and recording 22 tackles with 2.5 tackles for loss, two sacks and one fumble recovery. He’s scheduled to have surgery Monday.

Meanwhile, though All-American outside linebacker Zion Tupuola-Fetui recently returned from a torn Achilles tendon, UW has suddenly lost its starter on the opposite side. In 49 career games at UW, the former walk-on from Bellevue registered 124 tackles, 25.5 tackles for loss, 13 sacks, four forced fumbles and an interception — earning All-Pac-12 second-team honors in 2019.

On Monday, UW head coach Jimmy Lake also announced that sophomore inside linebacker Edefuan Ulofoshio — a preseason Pro Football Focus and Walter Camp All-American — is out for the season with an arm injury suffered in the UCLA loss Oct. 16. 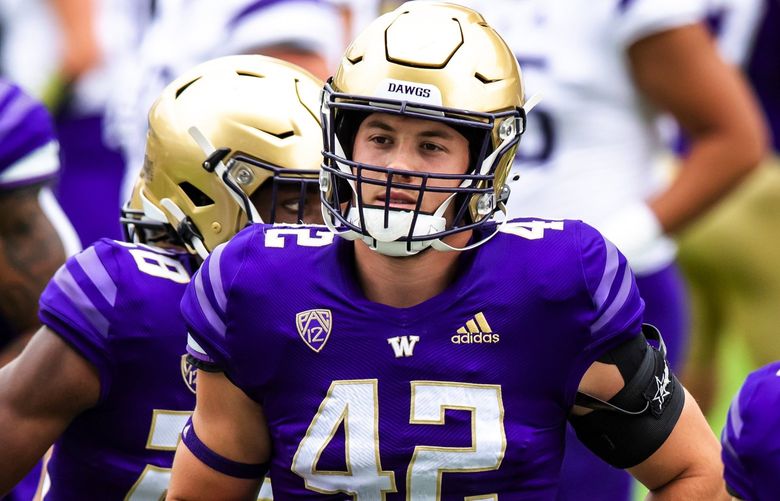 Is Husky legacy Carson Bruener the answer at inside linebacker?

“I think the (outside linebacker) group as a whole has played solid,” Lake told local media Thursday. “Definitely Zion has added some electricity. Everyone can see that, the juice that he brings off the edge. But I think the group as a whole … Cooper (McDonald) is solid, Ryan Bowman’s been solid, Sav’ell (Smalls) keeps coming along every single week. Jeremiah Martin gives us some things as well. He’s still learning the defense and the ins and outs, but he’s shown flashes.

“But like a lot of position groups, we’ve got to just continue to grow and develop. I’m happy with that group, but we need to see improvement every single week.”

The Huskies would certainly like to see more improvement from Smalls, a former five-star recruit who had just three tackles in his first seven games (and is still awaiting his first career sack).

But Lake seems pleased with the second-year freshman’s progress all the same.

“You think of a guy like Zion, who was not a highly regarded recruit coming in here and how long it took for him to finally have that lightbulb flash on, and him getting bigger and stronger in the weight room and more explosive, understanding his footwork and his hand fighting techniques and pass rush moves. So it’s a process with those linemen on both sides of the ball. So I think Sav’ell is right where he needs to be.”

Lake also said Monday that Jordan Lolohea — a 6-2, 265-pound second-year freshman — is “playing his best football since he’s been here, no question. He’s learned his position. He gives us a physical presence out there, and you’ll definitely see Jordan play a lot more here as we move forward.”

In that regard, the Huskies suddenly don’t have much of a choice. Without Bowman, it’ll be up to McDonald (18 tackles, 1 sack), Martin (eight tackles), Smalls (three tackles), Lolohea (four tackles) and Bralen Trice (two tackles) to provide a pass rush opposite Tupuola-Fetui.

Considering the attention “ZTF” is already receiving from opposing offenses, there will be opportunities.

“There’s no avoiding (double and triple teams),” Tupuola-Fetui said Wednesday. “If you make plays, the other team’s coach is going to notice you. That’s all it is. (Arizona) tried to run one-on-one blocks, and it doesn’t work for the most part.

They haven’t seen much success so far.

Ja’Lynn Polk was injured on the first play of his Husky career. The second-year freshman and Texas Tech transfer recorded a 13-yard reception on UW’s first offensive play against Montana, then exited the game with a chest injury and required emergency surgery. Two days later, Lake reported that Polk would be out for the remainder of the regular season.

As for other injuries, safety Cameron Williams and defensive tackle Sam “Taki” Taimani also returned after missing the Arizona game (and, in Williams’ case, the UCLA game as well). Left tackle Jaxson Kirkland was out for the second consecutive week, and safety Asa Turner didn’t play against Stanford with an apparent injury as well.

In their places, redshirt freshman Troy Fautanu got the nod at left tackle for the second consecutive week, and second-year freshman Carson Bruener made his second career start at inside linebacker in place of the injured Edefuan Ulofoshio (who’s out for the year with an arm injury). Though Williams was available, the Huskies’ starting safeties were Dominique Hampton and Brendan Radley-Hiles. Kyler Gordon slid inside to take Radley-Hiles’ nickelback spot, and Mishael Powell assumed Gordon’s old spot at corner.