Skip to content
By
Kate Shefte
and
Associated Press staff

In a massive blow to the Pac-12, USC and UCLA will be members for two more seasons before beginning competition in the Big Ten in 2024-25.

“While we are extremely surprised and disappointed by the news coming out of UCLA and USC today, we have a long and storied history in athletics, academics and leadership in supporting student-athletes that we’re confident will continue to thrive and grow into the future,” a statement released Thursday afternoon by the Pac-12 read.

“We’ve long been known as the Conference of Champions, and we’re unwavering in our commitment to extend that title. We will continue to develop new and innovative programs that directly benefit our member institutions, and we look forward to partnering with current and potential members to pioneer the future of college athletics together.”

Whether or not that includes an impending move by UW, remains to be seen. In a joint statement, UW President Ana Mari Cauce and Athletic Director Jen Cohen said Friday, “We are disappointed by the news that UCLA and USC are leaving the Pac-12, a conference with such rich tradition and history.

“We have been in close contact with our leadership and peers in the Pac-12 and are working together to examine options and opportunities,” the statement continued. “The University of Washington has a distinguished record of success at the highest levels, in and out of competition, and is in a strong position as we process this development. We are confident that we will continue to increase the strength of our athletic programs and the success and well-being of our student-athletes.”

The Pac-12’s current media-rights contracts with Fox and ESPN are set to expire in 2024.

The decision by the Los Angeles schools — two of the NCAA’s most decorated athletic programs — comes almost a year after Oklahoma and Texas formally accepted invitations to join the Southeastern Conference in July 2025. 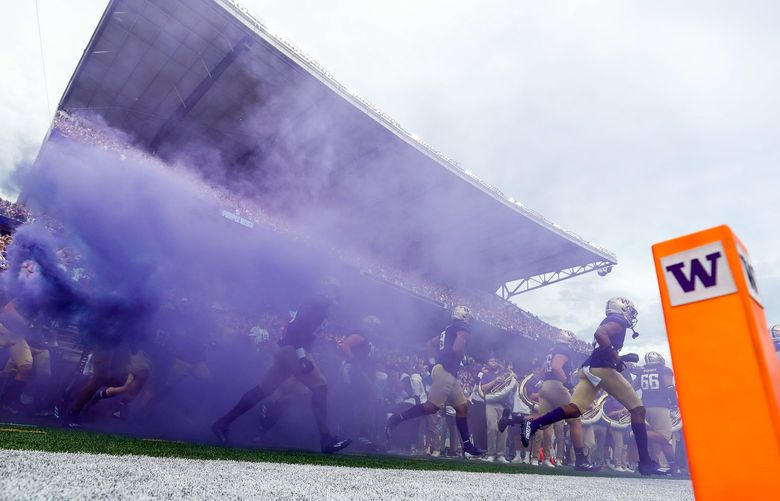 “This is the most volatile and uncertain era in the history of American collegiate athletics,” USC athletic director Mike Bohn said in a statement. “USC must ensure it is best positioned and prepared for whatever happens next, and it is our responsibility to always evaluate potential opportunities and be willing to make changes when needed.”

The Big Ten became the first conference to stretch from the Atlantic to the Pacific and built on previous expansion into the nation’s largest media markets. It has expanded twice in recent years, with Nebraska joining in 2011 and Maryland and Rutgers in 2014.

L.A. Times USC reporter Ryan Kartje reported Thursday evening that “no other Pac-12 members are expected to be added to the Big Ten at this time,” and that “Oregon, Washington, Stanford, etc., will not be following USC and UCLA.”

“Our storied athletics program, based in one of the biggest media markets in the nation, has always had unique opportunities and faced unique challenges. In recent years, however, seismic changes in collegiate athletics have made us evaluate how best to support our student-athletes as we move forward,” a UCLA statement credited to chancellor Gene Block and athletic director Martin Jarmond read.

In spite of greater travel distances, the statement pointed to benefits including enhanced “name, image and likeness opportunities through greater exposure” and better TV time slots for road games.

The move to the Big Ten would greatly enhance USC and UCLA’s revenues.

The Pac-12 distributed only $19.8 million per school in fiscal year 2021, by far the least among Power 5 conferences. The Big Ten’s per-school distribution was $46.1 million, second only to the SEC’s $54.6 million.

The Pac-12 has had difficulty getting its conference television network untracked while the Big Ten Network is the most established of the conference networks.

The Pac-12’s current membership has been the same since 2011, when Colorado and Utah joined. Washington and Washington State have been members since 1915 and 1917, respectively, when it was called the Pacific Coast Conference. Washington joined the year the conference was founded while Washington State became the fifth member.

The Associated Press contributed to this report.