We finally made it.

Why he’s ranked here: A former three-year starter at Oklahoma, “Bookie” made an immediate impact after arriving on Montlake last spring. “He’s a Dawg, simple as that,” UW head coach Jimmy Lake said at Pac-12 media days. “We talk about what Dawgs are. They’re big-time people but also big-time football players. This guy loves football, high football character, a great person. You can already tell he’s going to make a bunch of plays for us. He’s a leader for us. He’s going to energize our stadium when he does it. We are very thankful that Bookie decided to come to the University of Washington.” 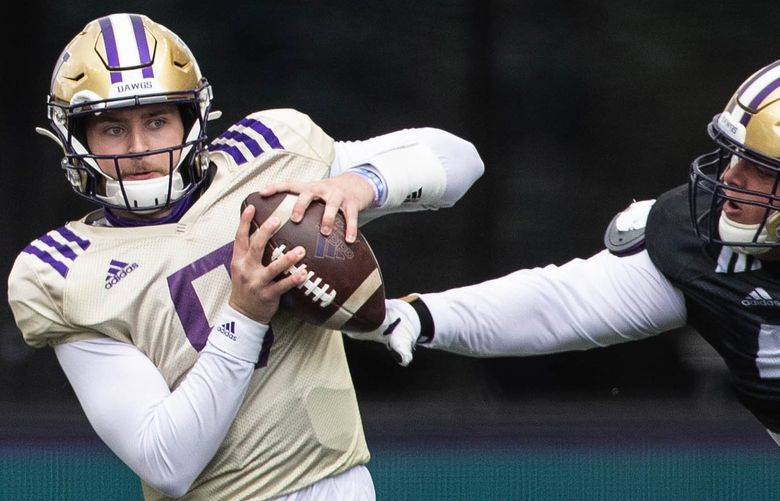 Potential role in 2021: Starting right guard and purveyor of pancakes.

Why he’s ranked here: Jaxson Kirkland and Luke Wattenberg have earned much of the attention, and rightfully so. But on the right side, the 6-6, 330-pound Bainivalu earned Pro Football Focus first-team All-Pac-12 honors in 2020, and should improve in his second full season as a starter. The junior colossus and former Skyline High School standout has surprisingly nimble feet and could emerge as an NFL prospect with a convincing 2021 campaign.

Why he’s ranked here: Kyler Gordon is the most athletic defensive back Lake has ever had — more athletic than Budda Baker and Taylor Rapp and Kevin King and Sidney Jones, and on and on and on. Only now, he’s paired those physical advantages with technique and play recognition. “We all knew he was an extraordinary athlete, and now finally he feels it,” Lake said. “You can see the smile on his face. He’s like: ‘Coach, I know what I’m doing now. I know the techniques. I know the plays are coming before they’re being executed against us.’”

Why he’s ranked here: Wattenberg has played left tackle and left guard. Now, he’s playing center. And though he doesn’t inspire the same excitement as some on this particular list, the sixth-year senior provides a steady presence in the middle of what could be an elite offensive line. UW offensive line coach Scott Huff said last spring that “it’s tough to find someone that’s worked harder going all the way back to the beginning of this pandemic.” That work will continue to quietly pay dividends for UW.

Potential role in 2021: Starting outside linebacker and do-everything defender.

Why he’s ranked here: In his last full season in 2019, Bowman produced 34 tackles, 9.5 tackles for loss, 5.5 sacks, three forced fumbles and an interception in 13 games. And, if the value of his presence wasn’t apparent enough, note how the UW defense disintegrated when Bowman missed the final two games of the 2020 campaign. Without All-American outside linebacker Zion Tupuola-Fetui, Bowman’s return for a sixth season in 2021 is all the more important. Expect the perpetually underrated outside linebacker to answer the call.

Potential role in 2021: Starting inside linebacker and unabashed defensive leader.

Why he’s ranked here: It seems like a decade ago that Ulofoshio arrived as an anonymous walk-on linebacker in 2018. Since, he’s earned a scholarship, a starting position, All-Pac-12 honors and a whole lot more. The Anchorage, Alaska, native and pre-med student was a Pro Football Focus and Phil Steele Honorable Mention All-American last season, and without departed DB Elijah Molden, he’s now UW’s defensive leader. The fourth-year sophomore is ready to ascend.

Potential role in 2021: Will likely (but not certainly) miss the entire season with a torn Achilles.

Why he’s ranked here: “ZTF” came out of nowhere to lead the nation with 1.75 sacks per game in 2020. The All-American outside linebacker and first-team All-Pac-12 performer might be ranked even higher, had a torn Achilles tendon in April not likely wiped out his 2021 season. Still, Lake said last week, “I have no doubt he’ll be back sooner than our doctors think he’ll be back.” Perhaps a late season return for the pearl from Pearl City, Hawaii, is not out of the question.

Potential role in 2021: Starting left tackle and eater of worlds.

Why he’s ranked here: After starting his first four games at left tackle in 2020, the 6-7, 310-pound former right guard might have sneaked into the first round of the 2021 draft. Instead, Kirkland decided to return for a fifth season in Seattle and continue to anchor an experienced Husky offensive line. “The reason I came back is to leave a legacy at the University of Washington,” he said at Pac-12 media days last week. “The college experience is huge to me, and that’s what I plan on doing.”

Potential role in 2021: UW’s most trusted pass-catcher and an elite blocker at tight end.

Why he’s ranked here: Cade Otton led the Huskies in catches (18), receiving yards (258) and receiving touchdowns (3) in 2020. He snared the go-ahead 16-yard score in a thrilling 24-21 comeback win over Utah. He also separated himself as a bruising blocker in the run game. In an offensive system that utilizes its tight ends in myriad ways, Otton is perfectly suited to expose an overmatched opponent up the seam or seal the edge on a walk-in touchdown run. In other words: he’s essentially an NFL tight end. Enjoy him while you can, Husky fans.