Outside linebackers are out.

The “EDGE” and “husky” positions are in.

But the changes surrounding UW’s defense amount to more than just labels. After Kalen DeBoer was hired to succeed Jimmy Lake at Washington, he brought a pair of Fresno State assistants — Chuck Morrell and William Inge — to serve as co-defensive coordinators in Seattle. At UW, they’ll be tasked with solidifying a defense that excelled against the pass (ranking first nationally in passing defense and opponent yards per pass attempt) but struggled to stop the run (finishing 105th in opponent yards per carry and 109th in rushing defense) last fall.

Without standout corners Trent McDuffie and Kyler Gordon — as well as Lake — does UW still deserve DBU billing? And will the Huskies effectively plug the run and rush the passer in 2022?

While we wait for answers — as well as Washington’s first spring practice on Wednesday — let’s dive into UW’s defensive depth chart. 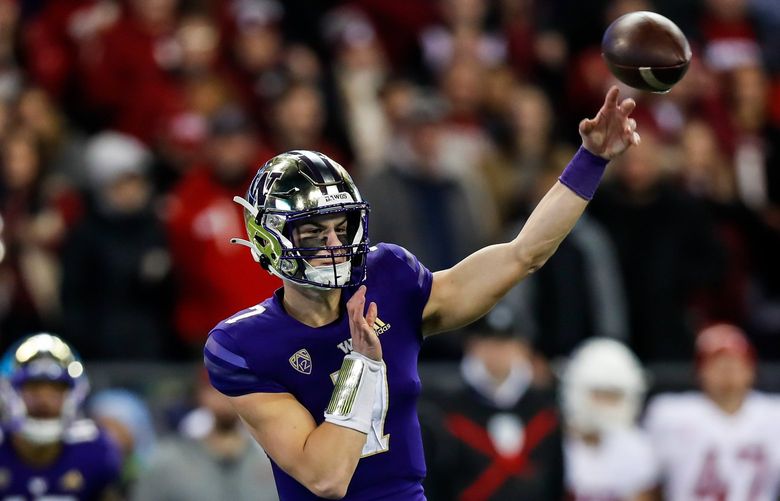 Analysis: Simply put, UW needs more out of its defensive line. As stated above, the Huskies surrendered 194 rushing yards per game and 4.76 yards per carry last season, a stunning plummet for a unit that not-so-long ago excelled at stopping the run. Two-year starter Sam “Taki” Taimani also transferred to rival Oregon, leaving a vacancy — or opportunity — in the middle of UW’s defensive line.

Junior Tuli Letuligasenoa is an established starter, and Faatui Tuitele and Jacob Bandes will each be asked to contribute as well. Voi Tunuufi — who shared the team-lead with three sacks as a true freshman — could further emerge in his second season, and look for redshirt freshman Kuao Peihopa to push for playing time as well.

Analysis: Zion Tupuola-Fetui exploded for seven sacks and three forced fumbles in just four games in 2020, leading the nation with 1.75 sacks per game. But after tearing his Achilles tendon last April, he managed just eight tackles and one sack in five games last fall.

Which version of “ZTF” will we see this season?

The answer could go a long way in determining UW’s pash-rush prowess (or lack thereof). But UW could also expect added contributions from redshirt sophomore Bralen Trice, who mustered five tackles for loss and two sacks in his first meaningful playing time in 2021. It might also be time for sophomore Sav’ell Smalls — a five-star recruit in 2020 — to play to his potential.

The Huskies don’t own a whole lot of depth at the “EDGE” position, so they’ll need “ZTF” and others to take tangible strides.

Still, Ulofoshio’s return — plus the addition of fifth-year senior and Pitt captain Cam Bright — could push Bruener out of the starting lineup.

For the Huskies, that’s a good problem to have.

Analysis: Dominique Hampton — who, at 6-foot-2 and 220 pounds, has long toed the line between a defensive back and linebacker — seems perfectly suited for the “husky” role, a hybrid nickel who must competently cover down the field while also stuffing the run. Hampton’s primary competition at that spot will be sophomore Kamren Fabiculanan this spring, though freshman safety Tristan Dunn could also join the fray.

As UW cross-trains defensive backs to compete at the “husky” spot, Jacobe Covington and Asa Turner are two other options with the size and speed to potentially succeed at this position.

Analysis: Given the NFL departures of McDuffie and Gordon … who’s next?

On paper, Perryman appears to be an easy answer, after transferring from UC Davis with just one season of remaining eligibility. The 6-0, 201-pounder certainly looks the part and has earned rave reviews from the Husky coaches throughout winter conditioning as well.

On the other side, Powell — who earned a scholarship this offseason — must be given an early edge, considering he started three games last fall. But Jacobe Covington, Elijah Jackson and Zakhari Spears are also long, athletic corners who could potentially push for playing time.

Analysis: Senior Alex Cook may be penciled in for a starting safety spot, after he provided a physical presence (as well as 46 tackles) in 11 games and nine starts last fall. But though juniors Asa Turner, Cameron Williams and Julius Irvin have all seen the field in Seattle, none have separated themselves on the back end of UW’s defense.

Which, with a new coaching staff, should make the competition especially intriguing this spring. Who will impress new UW co-defensive coordinator and safeties coach Chuck Morrell? Is it possible the Huskies could eventually search for a more established safety via the transfer portal?

While UW’s corners have continued to impress over the last several seasons, the Husky safeties cannot say the same. It’s time for that position to pack a more significant punch.