Of course, it’s hard to glean too much from a one-hour viewing window and minimal physical contact. But let’s dive into observations nonetheless.

Though UW offensive coordinator and quarterbacks coach Ryan Grubb made it clear on Monday that the Huskies’ three scholarship quarterbacks will receive equal starting reps in the first four practices, Dylan Morris took the opening first-team snaps on Wednesday. His first pass was an accurate deep ball that clattered through wide receiver Rome Odunze’s hands for an incompletion. 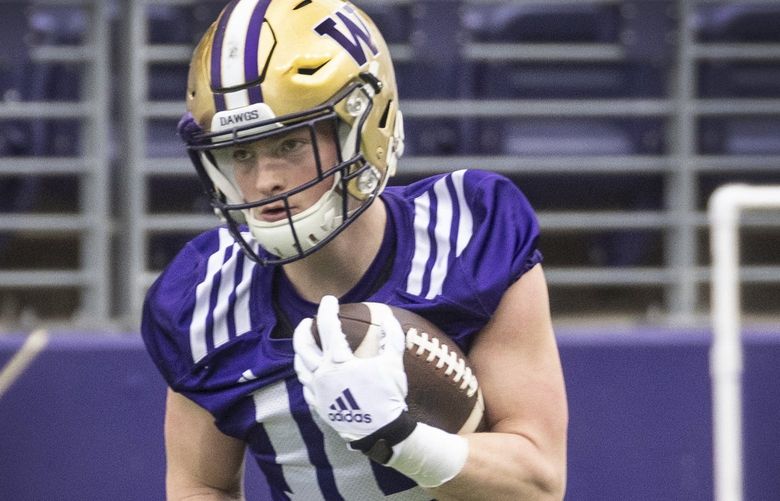 The inclusion of Sirmon — a walk-on who just converted from quarterback to running back — may seem surprising on the surface, but it’s less so when you consider that Richard Newton, Cameron Davis, Sam Adams II and Emeka Megwa are all dealing with various injuries. Redshirt freshman Caleb Berry didn’t appear present on Wednesday either. The only running backs who received significant reps were Sirmon, New Mexico transfer Aaron Dumas and redshirt freshman Jay’Veon Sunday.

There was also intrigue on the right side of the offensive line, where Curne slid to right guard after starting the last 16 games at right tackle. Returning right guard starter Henry Bainivalu was present but may have been limited in some capacity.

A Kirkland cameo and other injury issues

Jaxson Kirkland sure looks like he’s still a Husky.

The two-time All-Pac-12 left tackle — who dropped out of the NFL draft after requiring right ankle surgery, re-enrolled at UW and is awaiting the results of an NCAA waiver to play in 2022 — watched Wednesday’s practice in his typical purple No. 51 jersey with a boot on his right foot.

As for other injuries, running backs Richard Newton and Cameron Davis, defensive lineman Faatui Tuitele and linebacker Edefuan Ulofoshio all watched practice from the sideline. Wide receiver Jabez Tinae wore a yellow jersey, meaning he hasn’t been cleared for contact. Running back Caleb Berry and Emeka Megwa and safety Julius Irvin didn’t appear to be present.