The one word everybody used was “tough.”

If you didn’t register on Lambright’s tough meter, you weren’t getting anywhere with him. For the former Huskies player and coach, grit was the ultimate currency.

“Lambo” died at the age of 77 due to undisclosed causes, his family announced Sunday. The Everett native left the world having been a part of 386 Washington football games as a coach and player — the most in school history.

His legacy at the UW is complex, but one thing was certain: If you lined up against one of his defenses, you were gonna need a high pain tolerance. 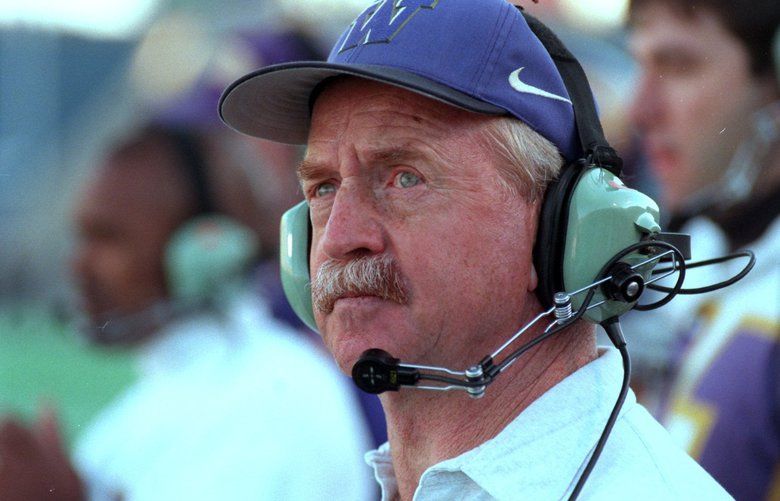 “I remember when I was at UCLA, we practiced harder for Washington than any other team — with the exception of maybe USC — because we knew the swarming mentality that Lambright’s defense had,” said former Washington coach Rick Neuheisel, who played quarterback for the Bruins in the early 1980s. “Lambright was going to make it a party at the football — it was a slobber knocker type of affair every time.”

Lambright was a defensive end for the Huskies from 1962-64 and won a conference title his junior year. He came on as an assistant coach in 1969, was promoted to defensive coordinator in 1978 and, in 1993, succeeded Don James as the Huskies’ head coach.

His ingenuity as a coordinator paved the way for the Huskies’ dominance in the 1990s, which included a national championship. Wanted to get a pass off as an opposing offense? You had about one Mississippi to do so.

Midway through the 1989 season, the Huskies lost a shootout to Arizona State, 34-32. This forced Lambright to make an adjustment to try and get more pressure on the quarterback.

The result was UW going to an eight man front …

“No, it was an 11-man front,” said former Huskies head coach Keith Gilbertson, who was the offensive coordinator at UW when Lambright was the DC. “Everybody was up on the line of scrimmage. You had no idea who was dropping or blitzing. It really stressed offensive systems.”

The Huskies won the Rose Bowl in 1990, the national championship in 1991 and the Pac-10 title in 1992. UW’s opponents averaged a mere 13.4 points per game during that three-year stretch.

Lambright took over the program in 1993 after James resigned in the wake of NCAA sanctions. It was the polar opposite of an ideal succession. Lambright compiled a record of 44-25-1 in the six seasons before his firing, and though there were some highlights — namely the 38-20 win over Miami in 1994 (better known as the “Whammy in Miami”) — the Huskies never got back to the Rose Bowl.

Two seasons later, they did. And it was Lambright’s recruiting classes — headed by quarterback Marques Tuiasosopo — that led them there.

Perhaps that’s why Neuheisel, who succeeded Lambright, let Jim stand on the sideline in Pasadena. Washington wouldn’t be there without him, and the players knew it.

“We all have great feelings toward coach Neuheisel and how he was able to finish the job, but to a man, if you asked anyone, it was coach Lambright who started it,” said Tuiasosopo, who Lambright recruited as a quarterback despite the rest of the country telling him he was a safety. “He got us to buy in to Husky football. He embodied what Husky football was all about.”

Tuiasosopo was among those who said that Lambright would weed out anybody who he didn’t think was tough enough. You weren’t going to put on that golden helmet unless you proved yourself to him. His personality didn’t allow for an alternative.

Neuheisel said he heard a story about Lambright during his coordinating days, when a van would take the home and visiting assistant coaches from the press box at Husky Stadium to the locker room during halftime. Lambright always insisted on sitting shotgun.

According to Neuheisel, former UCLA offensive coordinator Homer Smith was sitting up front one day, and Lambright wasn’t having it. Smith eventually relinquished his spot.

That was Lambright for you. Beloved by many, but not someone you messed with.

Former Husky quarterback Sonny Sixkiller said he used to remember Lambright giving pregame speeches, and even though he was talking to the defense, Sixkiller found himself getting pumped up. There was just an inimitable look in Lambright’s eyes that made you want to bring the pain.

“He was tough but fair,” Sixkiller said. “But mainly tough.”