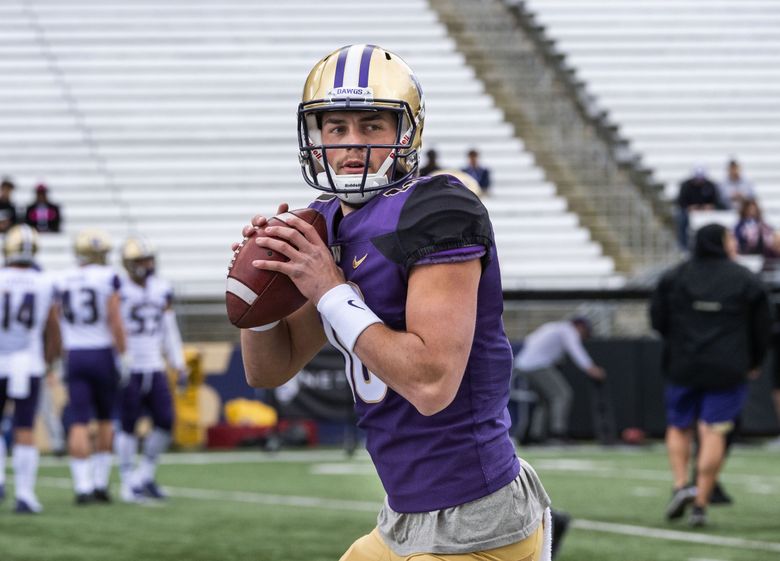 Take a look inside the box.

If you can find it. It’s hiding in plain sight inside Tom Tri’s cramped office at Lake Stevens High School, where team photos are taped onto the orange cabinet doors behind the desk and footballs and shoulder pads are strewn across the worn purple carpet. Every inch of the head coach’s office is occupied — with framed paintings and golden footballs and hats and mini helmets and papers and playbooks and fond memories of fall Friday nights.

On top of the microwave, there is an entirely unspectacular brown cardboard box.

On July 31, a day before University of Washington head football coach Chris Petersen is scheduled to meet the media to kick off fall camp, Tri grabs said box from on top of the microwave and drops it on the floor. He reaches inside and pulls out two parts of the same trophy — a round, reflective silver base and a pyramid-shaped crystal to place on top of it. (Some assembly is required.)

This is arguably the most prestigious award in all of high school football. Previous winners include Kyler Murray (2014-15), Brock Huard (1994-95), Peyton Manning (1993-94) and Emmitt Smith (1986-87) — not to mention the list of stars and future celebrities from who have won the Gatorade award in other high school sports. On Dec. 15, 2015, the trophy was presented by Seahawks linebacker Bobby Wagner during an all-school assembly.

“Having my name on that trophy with all those crazy great athletes — LeBron James, Derek Jeter, all those guys — I can’t really put into words how it makes me feel,” Eason said in an acceptance video. “It’s another step in the right direction, just to be recognized for more than just my athletic achievement.

“It’s a really humbling experience, and I can’t wait to see where it goes.”

At some point between then and now, it went into a cardboard box that sits on top of a microwave in the corner of his coach’s office. And really, that’s the point.

Eason won so many awards at Lake Stevens that the school literally ran out of places to put them.

You can understand, then, why it seemed like the entire state of Washington wanted Eason to win the starting quarterback job.

A prep career that included 9,813 passing yards, 102 touchdowns and just 18 interceptions will do that — especially when his high school is conveniently located just 35 miles north of Seattle.

So will recruiting rankings. When he enrolled at Georgia in January 2016, Eason was regarded as a five-star prospect, the No. 1 player in Washington, No. 2 pro-style passer and No. 4 overall recruit in the 2016 class by 247Sports.

So will his frame (6-foot-6, 227 pounds, with flowing brown hair that strikes a delicate balance between wild and wavy) and his family (father Tony played wide receiver at Notre Dame).

When Eason transferred to Washington in the winter of 2018, it was more than a heralded homecoming. The narrative fit; it felt like fate. Of course he would win the starting job following Jake Browning’s departure in 2019. Of course he would pile up prolific numbers and improbable completions, leading the home state Huskies to unprecedented success. Of course he would claim a few more trophies before floating gracefully into the first round of the 2020 NFL Draft.

Before he ever joined the quarterback competition, expectations for Eason were already immense. The hype train ran off the rails and crashed directly into the end zone at Alaska Airlines Field.

How can anyone — let alone a 21-year-old kid — excel under that kind of spotlight?

“This is a college guy that’s played one year of college football. I just think it’s a disservice to him for you guys to put all this pressure on him, because I’ve seen what’s out there and all that kind of stuff,” Petersen said following UW’s first spring practice in April. “I mean, he’s a college guy that’s played one year of football that’s got some really good talent. But our other guys do as well. But it’s not being talked about like it is with him, and I think that’s unfair.

“That’s why I hope he’s got everything (turned) off in terms of the social media and all that kind of stuff so he can just lock in. Because nobody in the NFL can even play as good as everyone is making him out to be.”

Of course, Eason has dealt with all of this before. He experienced it at Lake Stevens — where Nick Saban, Jim Harbaugh, Lane Kiffin, Mark Richt, Mike Leach, Chris Petersen, etc. etc. etc. sat in the stands to watch his basketball games; where they had to organize three separate pro days just so dozens of coaches could fly from all over the country to stand on the sidelines and watch him throw.

He experienced it at Georgia, where the former five-star prospect started 12 games as a true freshman and produced inconsistent results, completing 55.1 percent of his passes and throwing for 2,430 yards with 16 touchdowns and eight interceptions; where he led the Bulldogs on game-winning drives to beat Missouri, Kentucky and Auburn; and where, after injuring his knee in the 2017 opener, he was promptly (and permanently) replaced by freshman Jake Fromm.

It’s not that Eason is oblivious or immune to the mounting public pressure. And it’s not that he doesn’t care.

He just won’t let it crush him.

“Don’t get me wrong: he cares, he competes. He’s a dude. But he internalizes it really well. He doesn’t show it with his emotions.”

That’s where things get sticky; that’s where Eason’s easygoing temperament can get twisted and misconstrued.

UW Huskies pick 'em: Make your predictions and compare with our experts

“That’s what worries me about UW,” Tri continues. “Because he’s so even keeled and nonchalant, I’m worried people are going to think, ‘Oh, he doesn’t care about the program. He doesn’t work hard enough. He’s not leading enough. He’s not vocal enough.’ He needs to get better at those things. That’s a weakness — his ability to communicate to everybody and realize, ‘Dude, whether you want to be the guy or not, you’re the guy. You’re playing quarterback at the University of Washington.’

“I feel like he’s gotten better at that, but that’s never going to be his strength. So that’s the one thing that concerns me a little bit about it. He’s the ‘hometown hero,’ ‘savior of the program,’ and all of a sudden he’s not doing some of the things that maybe people expect him to do, and they’re going to be like, ‘Oh, he doesn’t care.’

“That couldn’t be further from the truth. He does care. He cares a great deal. He just doesn’t externalize it.”

Except when he needs to — or, in this case, when he’s directly asked for comment.

“People that don’t know me, people that write things about me, they can say those things (about my personality),” Eason said after an August practice, holding his helmet with both hands. “But I’m not really worried about what other people think of me. I’m going to do the best I can to be a leader on this team and help out other guys any way I can.”

Take a look at the line.

It’s 4 p.m. on Aug. 10, and Washington has just wrapped up an open practice inside Husky Stadium. Hundreds of fans are flooding the field, determined to take pictures with their favorite players (as well as Petersen).

But the most popular target is wearing No. 10.

Eason set up shop on the south sideline, at the 40-yard line, and for a full hour the line of fans looking for photos stretches well past the ‘W’ at midfield. It looks like a line you’d find in a massive mall in late December, as legions of little children wait to sit on Santa’s lap.

Only in this case, it’s not just kids. There are men and women of all ages; they wear Husky jerseys and purple hats and, in one case, a black T-shirt with the letters “OKG” stretching across the chest.

They step right up, one at a time, and Eason offers a warm (if mostly unnecessary) introduction.

“I’m Jacob. Sorry about the line.”

Like a seasoned politician, he holds babies, smiles and signs their shirts. A UW staffer is specifically assigned to take photos, anticipating the lengthy line. After one father and son secure an Eason selfie, the father turns to his boy, yells, ‘That was so awesome!’, lifts him onto his shoulders and literally skips away.

The line to take a photo with Jacob Eason stretches more than half the field pic.twitter.com/rkKoOmIseC

Meanwhile, on the opposite end, sophomore quarterback Jake Haener — whose mother and grandfather both attended UW — stands on the 25-yard line, posing for an occasional picture.

If it were a popularity contest, the quarterback competition would have been decided before it started.

Instead, it lasted until roughly a week prior to the season opener, when Eason was announced as the starter and Haener abruptly left the program a day later.

“Sometimes it’s a gut feeling on things like that,” Petersen said of the decision to start Eason. “I think a lot of times it comes down to that. It was a little bit of a gut feeling.”

Eason may be the starter, but — to quote Tri — is he the dude? Can he help the Huskies take the next step? Has he processed the playbook well enough to make decisive decisions — to let his talent take over?

“A lot of it’s that,” Eason said of his areas of improvement. “When you trust your reads and trust your progressions and let it fly, that’s when you play your best ball.”

Eason’s best ball is better than just about anybody else’s. The contents of the cardboard box on top of the microwave in Tri’s office are certainly proof of that.

But they’re also proof of the pressure associated with being prematurely labeled a “program savior.”

“Briefly meeting him, he seemed like a very great kid,” Bobby Wagner said after awarding Eason the Gatorade National Player of the Year trophy on that day in December 2015. “He definitely has his head on his shoulders. I’m definitely going to keep in contact with him and see where he goes. Hopefully I’m still in the league when he makes it here, and I’m able to hit him.”

Jacob Eason needs to win some games at Washington first.