Washington lost 13-7 to Montana at home.

It’s too bad UW fans came back to Husky Stadium to watch the game. If they were home, they could have turned off the TV.

Here are three instant impressions from the humiliating defeat. 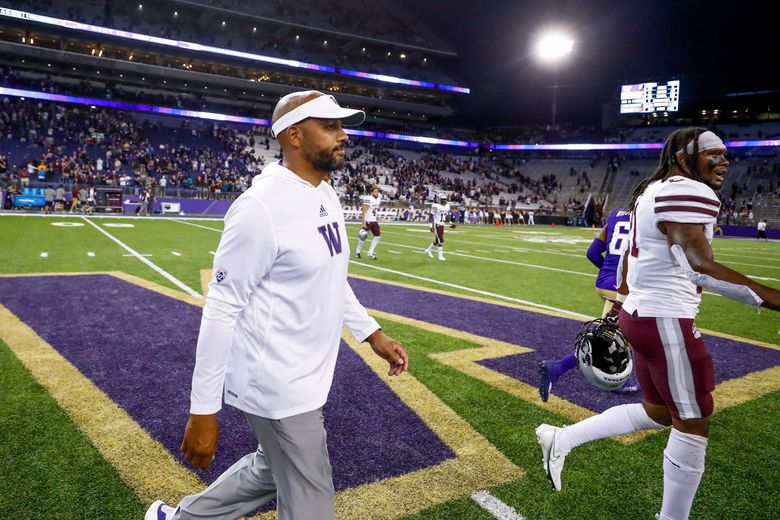 This was a historically bad defeat

There seemed to be two scenarios coming into the game: One, the Huskies win easily, but hey, a ranked team playing a lower division team at home should roll, or two, the Huskies struggle to win and leave a fanbase – if not coaches – very worried with much tougher foes looming.

Instead, a third scenario, a Montana win that seemed unthinkable, took place. This was a disaster for coach Jimmy Lake and the Huskies. There is no way to sugarcoat it.

Montana is a very good FCS team, but FCS is the key word. Pac-12 contenders do not lose to Big Sky teams. Or at least they should not. There is no doubt this is one of the worst losses in UW history.

Oregon State’s 21-20 win over Washington in 1985 when the Huskies were favored by about 38 points, is often ranked as the worst loss in school history. But Oregon State was a Pac-12 team. Can’t argue with anyone who wants to make the loss to Montana No. 1 on the list of the worst losses.

Perhaps the biggest concern was that Washington did not win the battle up front, particularly on offense. Take the first half. UW had 17 rushing attempts and 10 went for 1 yard or fewer. And until Richard Newton had a 7-yard run on the last play of the first half, UW had eight attempts without gaining more than two yards (with a minus-14 total in that span).

Montana had 13 rushing attempts in the first half, and all but two were for 2 yards or more. The Grizzlies struggled mightily passing the ball in the first half, but the Husky defense was helped out by Montana quarterback Camron Humphrey misfiring to open receivers.

It seemed the Huskies would inevitably wake up in the second half. They didn’t. And the UW defense allowed two scoring drives in the fourth quarter, so that unit isn’t off the hook.

The Huskies might rebound and win at Michigan, but that seems hard to envision after such a poor performance against Montana.

The QB is not the biggest issue

Dylan Morris made bad passes in the second and third quarters that were intercepted — mistakes he has to avoid — and then another pick that ended UW’s last hope. But he is not at the top of the reasons why UW lost.

Morris was missing some of his top receivers, and the lack of a running game certainly made his job tougher, too. It would have been nice to see Morris throw more deep balls, but issues at receiver probably had something to do with that.

There will be a lot of talk about all the areas that need improvement for the Huskies, and quarterback is definitely on that list. But there are bigger issues than Morris.

Perhaps the most surprising aspect of the game was how badly the UW offensive line performed in the first half after the game-opening touchdown drive. The running backs were getting hit near or behind the line of scrimmage and Morris was sacked twice in the first half.

And it wasn’t that much better in the second half. That is very puzzling as a veteran UW offensive line was supposed to be one of the strengths of the team.

Sure, Montana knew UW was playing without its top receivers. But you would think a ranked FBS team could tell an FCS team the exact play it was going to run and still be somewhat successful.

If UW can’t run the ball against Montana, how is it going to be able to run in the Pac-12?

Here’s a look at how UW’s loss to Montana stacks up against other bad losses in program history.