In his weekly news conference Monday, Jimmy Lake said UW’s struggles start with some variation of “us,” “me” or “coaching” six different times. He said it “comes back to coaching” four times, and sprinkled in a “we have to coach them better” to complete the ambiguous accountability theme.

He didn’t say the name of his offensive coordinator once.

Despite the fact that Donovan is making $875,000 this season to oversee an offense moving as efficiently as a massive ship stuck in the Suez Canal.

Despite the fact Lake was asked directly how he responds to fans who want Donovan fired.

“We need all this work we’ve been doing, all the positive mojo that we’ve had coming out of spring football, coming out of training camp, a lot of the positive stuff we saw happening in practice, shoot, a lot of stuff we saw happen in 2020 … that’s not showing up in these last two weeks,” Lake said in response. “I understand the frustration, but it’s our jobs to now get our offense going and show results, and it needs to start this Saturday.” 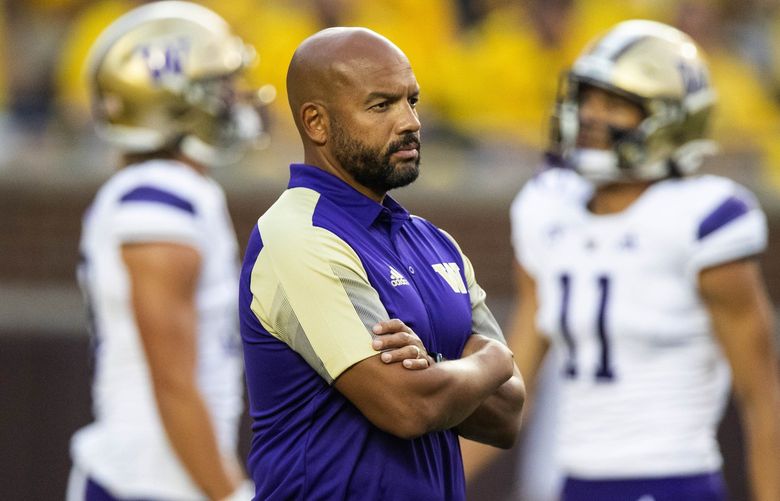 Of course, it was also Donovan’s job to get UW’s offense going against Michigan and Montana, and the Huskies sputtered and bored and embarrassed instead.

But Monday, Lake was unwilling to assign outside blame. When asked how he’d evaluate Donovan’s play-calling, he said: “Well, again, this comes back on me now. We’ve only scored 17 points in two games. So I would say it’s not very good right now, and that starts with me. So we’ve got to give our guys better plays. We’ve got to be able to move the ball quicker and start faster and give our guys confidence.”

And in many ways, sure, it comes back to Lake. It was Lake, after all, who hired Donovan. It was Lake who insisted on a seemingly archaic scheme. It was Lake who entrusted his offense to a Jaguars assistant who was fired as Penn State’s coordinator in 2015.

Lake’s fingerprints are all over the playbook … but Donovan’s still responsible for calling the plays.

“Of course on defense I can always have a couple little deals here and there adjustment-wise that I see, because I’m a defensive guy. But on game day our coordinators need to go and they need to call it. I’ve been on a bunch of different staffs where a head coach meddles a lot during game day and he ends up making it even more chaotic. So I definitely don’t want to do that. I’m going to cause more chaos during the week and then let our coordinators coach on game day.”

With his job seemingly secure (for now), Donovan will get to do that at 1:15 p.m. on Saturday, against an Arkansas State team that has surrendered 76 points in its first two games. But has an offensive scheme apparently predicated on bludgeoning runs between the tackles become — news flash — too predictable?

“There’s definitely some things that we need to change,” Lake said, in response to that question. “And I think there’s some things where we need to utilize who we have available, and I think that’s the bottom line of what we’ve gone through these last couple of weeks. We need to lean on our strengths and lean on who’s available. We can’t try to run plays where guys aren’t used to running those (routes) and making plays in those positions. And so, that’s the nature of football. Whoever’s available, we’ve got to make sure we’re utilizing those guys and leaning on our strengths.”

Of course, Lake is likely referring to UW’s lack of depth at wide receiver — where Terrell Bynum, Rome Odunze, Jalen McMillan and Ja’Lynn Polk have each missed at least one game.

But Lake wasn’t in the mood to make excuses Monday.

And he certainly wasn’t about to single Donovan out.

“It’s collaborative. It’s all of us together,” Lake said, when asked who’s responsible for designing UW’s offensive scheme. “And so, if you’re going to pin any blame, put it on me, if that’s what you’re trying to say. Everything goes through me first, OK?

“If you want to pin blame, just put my name on the article. I’m the one to blame.”

For now, Lake isn’t assigning Donovan blame (or even saying his name).

But that may change if Washington’s offense stalls yet again Saturday.

“For these first couple weeks we haven’t played our best, and our players know that and our coaches know that,” Lake said. “That is the exciting thing for us: we know there is a lot of room for improvement, but the improvement needs to happen now. All the work we’ve been doing needs to show up with the results on game day.”