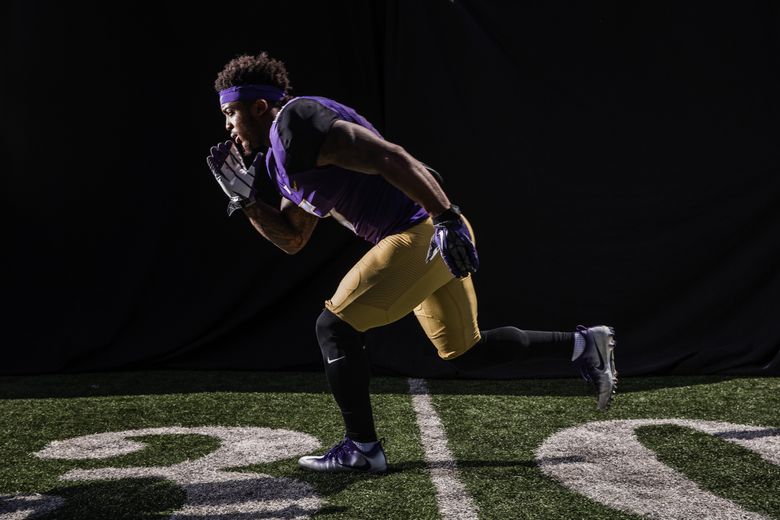 It’s all about physics when WR Chico McClatcher and other Huskies try to add speed. A tracking system monitors force going into and back out of the ground when running. (Dean Rutz/The Seattle Times)

It not only gives the UW staff a quantitative breakdown of each players’ workload — providing a blueprint for players’ strengths and weaknesses — but also an objective analysis of workouts.

Months before he would set the speed record at the NFL combine, John Ross ran a reverse during a scrimmage at Husky Stadium, turned up field along the sideline and raced toward the end zone.

As Ross ran, a four-inch GPS monitor harnessed on his back tracked his every step. The monitor, capable of capturing upward of 1,000 data points per second, then signaled details of his movements skyward to both U.S. and Russian satellites.

Soon, the data bounced back down to a computer screen inside the Husky Stadium football offices. One figure, showing Ross’ top-end speed on the reverse run, popped off the screen: 24 mph.

The Catapult tracking system used by the Huskies, and other teams, features a 3.7-inch GPS tracking device on the athlete and a heart-rate strap. The OptimEye S5 measures athlete micro-movements and transmits the data live via satellite. It computes 1,000 data points per second.

That bit of particular data is, in truth, more entertaining than it is useful. But it did hint at some of the vast capabilities of the Catapult tracking system the Huskies adopted last year. Sure, it’s fun to put an exact figure on just how fast guys can run — and Ross, we learned, can run faster than anyone in football — but Washington coach Chris Petersen and his support staff have invested in the trendy technology for more far-reaching uses.

Entering their second full season with the system, UW coaches, trainers and doctors pore through the data on a daily basis, and their hope is the technology — when combined with the Huskies’ more traditional training regime — can help make UW athletes faster, better and healthier.

“That area is so intriguing, the sports science,” Petersen said. “Each year, we’re trying to move the bar. How do we know more? How do we learn more?”

“I’m a 300-pound guy with arthritis in my knee and hip, so what do I know about speed training?” he deadpanned.

A former offensive lineman at Minnesota, Socha has been Petersen’s strength coach since 2006, going back to their days at Boise State. Petersen said he believes wholeheartedly in Socha, so much so that when Socha approached the head coach in January proposing to completely overhaul the team’s offseason training program — the one that helped the Huskies win the Pac-12 championship last year — Petersen signed off on it.

“Back in the day,” Petersen said, “I used to think speed was all flat-out God-given. (That) by the time we get them (in college), we’ve got what we’ve got.

“But the program these guys (Socha and his strength staff) do here gets them faster, and it has for a long time. They will move better.”

Socha, the FootballScoop.com national strength coach of the year, changed the offseason program with one goal in mind: get faster.

“Speed is the most important thing we work on,” he said. “We look at it like anything else we do: It’s a skill that over time you can develop. The coaches do a good job recruiting fast guys, which obviously helps. But at the end of the day, I got a great staff and I’ve got people around me that help us emphasize how important that is. …

“It’s all about physics: force into the ground versus getting force back out of the ground. So the more force you can apply into the ground at the right angles, the faster you’re going to be. Everything we do in our offseason — whether it’s our lifting or running or how we work flexibility — is all centered around trying to develop speed.” The benefit of having the Catapult system, Socha said, is it not only gives him and his staff a quantitative breakdown of each player’s workload — providing a blueprint for players’ strengths and weaknesses — but also an objective analysis of workouts.

“It takes some of emotion out of it,” he said.

He compared the tracking system to a car. If an athlete, in this metaphor, is the car’s engine, the Catapult is the dashboard that shows a detailed odometer reading, heat gauges and the like.

When UW first used the GPS monitors on players in practice last year, there was one revelation that caught coaches and trainers off guard: Offensive linemen were covering about four miles during an average practice — far more than anyone realized. They were able to cut back on the linemen’s footsteps, trying to make their movements more efficient.

Two data readings, in particular, are most relevant to Petersen, and he checks them after every practice: how much ground players cover and how many “explosive movements” they make. Most days, a list is posted near the locker room for players to check the tracking numbers.

“There’s no hiding out here,” Petersen said. “If a guy’s not doing much, we know it. And if a guy is actually doing a lot, then it’s our job as coaches to … back him off.”

Kyle Sammons, Socha’s assistant strength coach, is charged with organizing and dissecting the tracking system information. For him and the rest of the staff, there is still much to learn, much they don’t understand, and many details about it and its uses they don’t want to make public. UW is paying Catapult USA $28,985 this year to rent the tracking monitors.

A few years ago, Florida State was one of the first college programs to invest in the tracking system, and its coach, Jimbo Fisher, later claimed that soft-tissue injuries among players (such as pulled muscles) had been reduced by 88 percent in the first two years using the technology. Petersen said he didn’t know an exact figure that would show a similar reduction in injuries, but he said he felt there were fewer injuries over the past year with the new data.

“We’re looking really closely at that,” he said.

Ross is off to the NFL, and without him the Huskies have lost the fastest player in football.

But could it be that they haven’t lost a step?

“I do feel like we’re faster than last year,” junior wide receiver Chico McClatcher said. “We’ve got a lot of depth at wide receiver and a lot of guys who can take the top off coverages. We’re definitely feeling fast and feeling good.”

When daily results of the tracking system are posted in the UW locker room, McClatcher says his name is usually at or near the top. He takes pride in that.

“It’s a good way to see, to have it show on the computer system and see where you’re at in practice.”

Socha said it’s too early to tell just how fast this team is relative to last year. There is no John Ross on the roster, but there are a lot of fast guys who believe they got even faster this offseason.

“I just know we have a group of guys who like to work very hard,” Socha said, “and if you work really hard at something, you can have some good results.”