Giles Jackson, who had a career day at wide receiver in a surprise start for Washington on Saturday, had a simple but eloquent answer when asked about Husky quarterback Michael Penix Jr.

“He’s great,’’ Jackson said with a wide smile. “I like seeing him.”

And what’s not to like, or even love? Through two starts, Penix has run the Husky offense with precision, confidence and even a bit of elan. The Huskies’ 52-6 victory over Portland State, another out-classed opponent, was a continuation of the same elements that prevailed in their opening romp over Kent State. Penix led touchdown drives on Washington’s first four drives after doing so on their first six against the Golden Flashes. The level of execution and innovation compared to last season is light years advanced. The depth of playmaking options available to Penix is vast and varied. 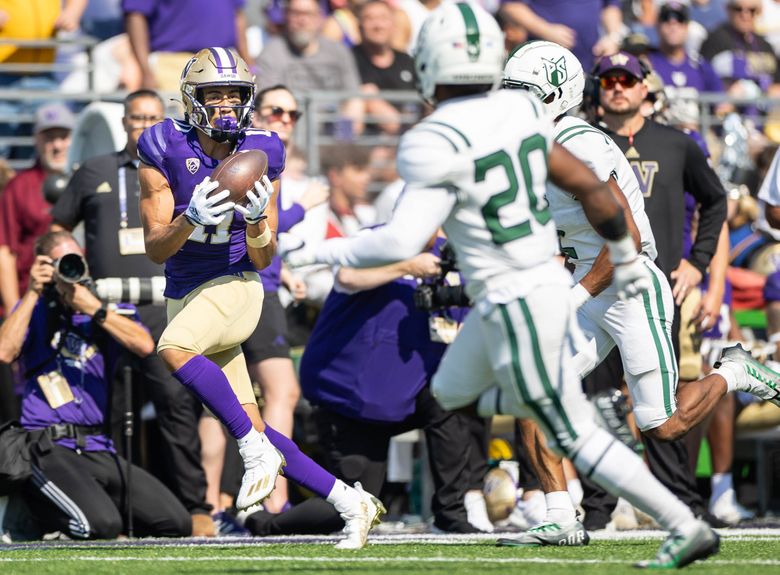 And yet, it’s still hard to know what it all means in the big picture. Have the Huskies, who racked up 617 yards of offense on Saturday — their most in four years — merely been cleaning up on inferior opponents? Is it possible they’re projecting an unrealistic sense of their offensive potential?

We’re about to find out, with what Penix called “a statement game” against No. 14 Michigan State looming next Saturday at Husky Stadium. Husky coach Kalen DeBoer walked a tightrope after the game, expressing delight with the Huskies’ performance and mindset, while sprinkling in numerous cautionary statements, such as:

▪ “We’ve got to put (together) a complete game. I know we’ve got even a lot better that we can be.”

▪ “We’re definitely not there yet. As a football team, there are some things that we’ve got to get better at.’’

▪ “Some of the little details we can still be better at.”

▪ “(Penix) is going to get a chance, along with our receivers, to be on the same page with a lot of different things that we just missed out on.”

Of course, no coach is ever completely happy, and DeBoer admitted that he’ll always find something to nitpick. Except for some concerns about depth at cornerback, the Huskies appear to be about as well-positioned as they could have ever hoped heading into the Michigan State showdown. And in Penix, they have someone with vast experience against Big Ten opponents from his days at Indiana, and a veteran’s sense of assurance and composure that trickles down to the rest of the team.

Channeling DeBoer, Penix called it “just another game” against Michigan State, but eventually acknowledged that it carries some extra gravity.

“It’s definitely a statement game,’’ he said. “We’re definitely going to make sure we go out there and just play how we’ve been playing, play free, and execute at a high level.”

The Huskies did just that against Portland State, though Penix had his first miscue of the season when he overthrew Ja’Lynn Polk late in the first half and was picked off. The fact that Washington had a 28-3 lead at the time eased the sting.

Penix finished 20 of 27 for 337 with two touchdowns, including an 84-yard strike to Jalen McMillan that was tied for the seventh-longest pass play in Husky history. Afterward, Penix was bubbling with enthusiasm over Washington’s offensive potential, the way his line kept him mostly clean for the second week in a row, and the creative playcalling of offensive coordinator Ryan Grubb.

“I’ll say that’s the reason I came here,’’ he said. “I came here because I know what those guys are going to do, and get us in positions to have those big games. A lot of yards and stuff like that, just the team buying in and trusting the preparation and trusting the plays that Coach Grubb is calling.”

The Huskies did their damage without their most explosive receiver, Rome Odunze, nursing what sounded like a minor injury. Jackson started instead and caught six passes for 103 yards to go with four receptions for 127 yards by McMillan — the first UW receiving duo to exceed 100 yards in the same game since the gold standard of John Ross and Dante Pettis in 2016.

Washington also stepped up its running attack after a somewhat pedestrian effort against Kent State. They carried 40 times for 241 yards, led by 94 yards from Wayne Taulapapa and 72 yards on 10 carries by Cameron Davis, who had two touchdowns.

Yes, it was “just” against Portland State. And yes, last week’s breakout showcase that introduced Penix to Husky nation was “just” against Kent State (which, it should be noted, was locked in a tight game with Oklahoma in the first half on Saturday).

But you can only play who the schedule presents you with, and the Huskies have done nothing so far but raise the hope that they can accomplish special things this year. The first true test of that notion will come next Saturday. Until then, it can be said without fear of contradiction that the Huskies are certainly a lot more fun to watch this year. It’s amazing how aesthetically pleasing a diverse, functional and explosive offense can be.

Asked if he felt the team was ready for their step up in competition against Michigan State, Penix laughed, as if it was a superfluous question.

“Ready? I’m ready for anything,’’ he said. “I don’t really look at the opponent. It’s about us. If we just do our job, execute, we can go out and beat anybody. Anybody they put in front of us.”