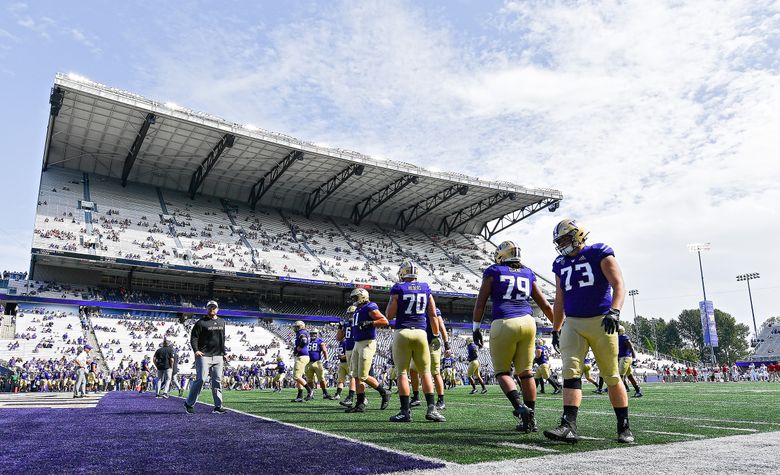 Four not-so-easy steps How Scott Huff and the Huskies compiled one of the best offensive-line classes in program history.

So, you want to recruit offensive linemen?

OK, so it’s not that simple, and there are other offensive-line coaches with exemplary recruiting records. Look long enough online, and you’ll find a credible list.

But only one is currently raising the recruiting bar at Washington.

“Losing guys like Zach Banner (to USC in 2012) and Josh Garnett (to Stanford in 2012) and Foster Sarell (to Stanford in 2017), there were a lot of questions about, ‘How come Washington can’t recruit good offensive linemen?’” said 247Sports national recruiting editor Brandon Huffman. “I think when you look at the job Scott Huff’s done in the (nearly) three years he’s been on staff, it’s impressive.”

So, no, the cupboard was far from bare.

But it’s about to overflow.

On the strength of his 2020 commitments, Huff is currently ranked by 247Sports as the top offensive-line recruiter in the Pac-12 and No. 4 in the nation — behind only Georgia’s Sam Pittman, Oklahoma’s Bill Bedenbaugh and Clemson’s Robbie Caldwell.

How did the third-year UW assistant secure four coveted commitments (and all by mid-July)?

Here’s how to assemble one of the best offensive-line classes in Husky history, in four not-so-easy steps.

Before you can find the right four-star stud, you need to know what you’re looking for.

“Tough. Smart,” Huff said, when asked what he identifies in future Huskies. “Those are hard things to figure out. You want tough guys. Trust me, I would love every guy to be pretty in football terms, where he’s 6-7 and whatever pounds and looks like a Greek god, but they’ve still got to be tough at the end of the day and they’ve got to be able to figure stuff out.

“So smart and tough. I know it sounds easy, but it’s really hard to figure out. And passion for the game plays into all of that.”

Unfortunately, toughness and intelligence aren’t always evident on tape. So you talk with coaches you trust. You talk with teachers and parents and high-school principals. You prioritize drop-in visits over Twitter DMs.

You look, you listen and, hopefully, you learn.

“You love to pick guys out of areas that you’ve recruited for a long time, because you’ve built up this relationship with coaches that you can trust,” Huff said. “But really you’ve got to put in the work and you’ve just got to watch. Actions speak louder than words. Any chance you can go to watch a player practice or play in a game, how they interact with their teammates, how they treat the water person — all of it matters. You get on campus and figure out if their English teacher likes them.

“All that stuff … you can’t put a price tag on it, how valuable it is.”

2. Get them on campus early (and often)

OK, so you’ve identified a player with toughness and intelligence.

They’ve sold you. How do you sell them?

“In a perfect world, they’ve already come up on campus definitely once, maybe multiple times (before the official visit),” Huff said. “So they’ve been there before, and you don’t have to do as much of the uniform tours. It can be a little more personalized.

“And then just being able to get them around our players is really, really important, so both the prospect and the players can spend time together. That’s huge. They can figure out, ‘Hey, are these the guys I like?’ And for our players, ‘Is this a guy I want to be around?’ So it’s all those things.”

Take Memmelaar, for example. The 6-4, 290-pound mauler from Middleton, Idaho, committed to UW during his second visit on campus. He spent much of that trip with McGary, who hails from a similarly rural background. He said that connection specifically “was pretty important to me.”

Or take Hatchett — who grew up in Ferndale, roughly 100 miles north of Husky Stadium. It’s true, he grew up watching the home-state Huskies (though he was not “an insanely huge fan”). But “for me, lots of it just came down to the relationships I had with the coaches and how I felt being down there and around there,” Hatchett said.

Washington felt like home (and in some ways, it already is). And, Hatchett said, he ultimately trusted his future teammates.

“I talked with the players before I made my decision, and they all said it’s the best decision I’ll ever make,” Hatchett said. “I truly believe that. UW really is the place for me, and based on what they said I’m going to have an amazing experience there.”

3. Don’t sell them on the hype

Sure, an official visit to UW includes a trip to the Space Needle. Maybe, if you’re lucky, you lounge on Lake Washington in defensive coordinator Jimmy Lake’s boat.

But the objective, Huff said, is not to present a false future. Because the goal isn’t just to get them to UW.

It’s to find a long-term fit.

“Coach Pete tells the recruits, and we all tell them, it’s hard. This is going to be really hard. College football is hard,” Huff said. “So we’ll get them here and try to show them what it’s really like and not sell them on some hype. It’s, ‘Hey, this is how it is. This is how we operate.’

“For the right kid and the right family, that’s exactly what they need to see.”

In the end, Rosengarten was the right kid. So was Murao and Memmelaar and Hatchett.

This might sound simple, but the practical purpose of a prospect’s visit is to understand what life would be like at the University of Washington (or anywhere else). So answer questions about academics, about football, about how they’d fit in the UW offense. Spend time on film study; eat meals with the players.

Sell your product, sure. But don’t market a mirage.

“We’ve got a great product here, right?” Huff said. “We’ve got an unbelievable university. We’ve got the city of Seattle. We’ve got coach Petersen. We’ve got UW football. I mean, what’s not to like … for the right kid.

“That’s about it right there. We’ve got a great product.”

4. Keep recruiting after the commitment

So the kid committed. Great!

Now it’s time to get to work.

As most classes do, the 2020 Husky commits have a group chat where all 19 verbal pledges can continuously communicate with their future college teammates.

But the offensive-line commits also have a separate group message — with five members, not four.

“We have a group message with all the commits on Snapchat where we talk back and forth, but then we also have a group message with the o-line and coach Huff where we talk back and forth quite a bit,” Hatchett said. “He’ll send us pictures and text with us lots of the time, ask us to give him a call probably a couple times every week.

“So we get to hear from him quite a bit in the group message we’ve got going.”

But, besides the star ratings, how does Huff know he recruited the right kids? Washington’s four offensive-line commits are already so close that they’re planning to visit each other’s hometowns before enrolling at UW to, in Memmelaar’s words, “see how they grew up and where they’re from.”

The commits already convened for a weekend in Newport Beach, Calif., where they were hosted by UW tight-end pledge (and honorary offensive lineman) Mark Redman.

“That’s what they’ve been talking about, so we’ll see,” Memmelaar said with a laugh. “I’ll just show them how I grew up. I live on a farm, so show them around. Small-town vibes, I guess.”

Not for much longer. Come December, Huff’s four coveted offensive-line commits will officially sign with Washington. They’ll comprise perhaps the premier offensive-line class in program history. And next winter, or summer, they’ll arrive in Seattle.

Thanks, in part, to four not-so-easy steps.