The first was the 1983 Penn State Nittany Lions, ranked No. 20 and defending a national championship, who lost to Cincinnati 14-3. Penn State shook off an 0-3 start to beat Washington in the Aloha Bowl 13-10.

The second was the 2007 Michigan Wolverines, ranked No. 5 nationally before Appalachian State left “The Big House” with a season-opening 34-32 win, widely considered the biggest upset the sport has ever seen. After falling at home again the next week against Oregon, the Wolverines ripped off eight consecutive wins, before ultimately defeating Florida 41-35 in the Capital One Bowl on New Year’s Day.

The third was the No. 10 Virginia Tech Hokies, who dropped their first two games in 2010 — a 33-30 shootout against Chris Petersen’s Boise State Broncos, and a 21-16 gut punch against FCS James Madison. The Hokies rebounded in a big way, winning 11 consecutive games — including an ACC title — before ultimately falling in the Orange Bowl to No. 5 Stanford.

The fourth was the No. 25 Oregon State Beavers, who dropped a 49-46 stunner to Eastern Washington in 2013 … only to beat Boise State in the Hawaii Bowl four months later.

The fifth was the No. 13 Iowa Hawkeyes, who clobbered rival Iowa State 42-3 on Sept. 10, 2016 … and promptly fell to FCS powerhouse North Dakota State the following Saturday. Iowa finished 8-5, falling to Florida in the Outback Bowl.

The sixth was the 2021 Washington Huskies, who find themselves in a precedented predicament. 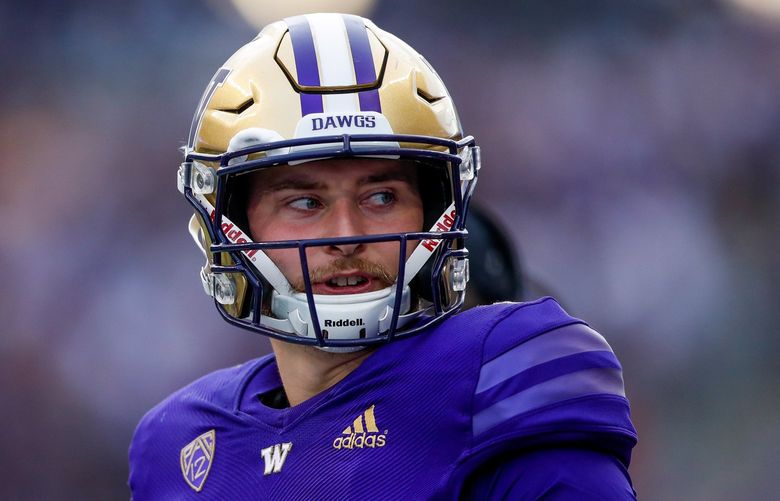 Despite Dylan Morris’ disastrous season debut, the Sam Huard era for UW football will have to wait

Historically, every ranked FBS team that has fallen to an FCS opponent has responded by reaching a bowl game, with Virginia Tech earning an ACC title. As UW tight end Cade Otton said on Tuesday, “There’s still so much opportunity out there. There’s still everything out there that we want to do.”

The question is, does Washington have the talent, coaching and locker-room leadership to do it — to push through an unimaginably debilitating defeat? Will one game define UW’s 2021 season, or can it propel the Huskies not to repeat that performance?

One way or another, history will repeat itself — either because the Huskies follow their four predecessors to postseason play, or because they let the Montana loss linger.

“Our best football is in front of us,” UW head coach Jimmy Lake said. “And now we’ve got to go back to work. The result was the result. We’re going to be pissed about it, and now it’s got to fuel us. Now it’s got to fuel us. We can’t do anything (about that result) now — that’s in the past now, that’s already through the time capsule. That’s behind. And I know everyone else wants to focus on what just happened — rightly so. You guys should, and everybody else should. The fans should. You guys can focus on that. That’s awesome.

On Saturday, Husky football — ideal or otherwise — will be played in “The Big House,” the same stadium that hosted Appalachian State’s upset 14 years ago. UW will attempt to reestablish itself on the road against Michigan, in front of more than 109,000 maize-clad fans.

It’s unclear whether wide receivers Terrell Bynum, Rome Odunze and Jalen McMillan — each listed as week-to-week — will make the trip to Ann Arbor.

And in a philosophical sense, it’s unclear whether their teammates will make the trip as well.

“Right after the game, obviously everyone was upset,” said Otton, who led UW with eight catches for 82 yards against Montana. “We all came together and we said, ‘We’re not going to let this ruin our season.’ We’re a team and we’re going to stick together through adversity. I mean, there have been adverse things in camp that we’ve gone through. And we knew adversity was going to strike at some point this season. We didn’t expect it to be like that, obviously.

“But as soon as it happened we came together, like, ‘All right, this is done. There’s nothing we can change now. We’ve got to move on. We’ve got to stick to the anchors of what we know keeps our program — keeps our culture — going strong. We had a great practice today. I’m super impressed by the response of everyone in our locker room, all of our coaching staff. We’re all moving on and we’re super excited for this opportunity coming up this week.”

That starts, of course, with Lake — who says he didn’t sleep on Saturday night, who accepted blame for the abomination, who admitted “all we can do now is move forward here and make amends, and that’s what we’re going to try to do.”

Granted, that’s not the most glamorous club to earn membership to.

But its members are recent proof that one loss — one iceberg — doesn’t have to sink the season.

“I’ve always thought of football as sort of a metaphor for life,” Otton said. “I choose to come back (instead of entering the NFL draft) and you think it’s going to be this fairy tale story, everything goes perfect. If we wrote our own life story, it probably wouldn’t look like it is now. You know what I mean? You’d want everything to go your way and be perfect and no issues at all. But that’s not how life goes and that’s not how this season has gone, and that’s OK.

“We took a step back and said, ‘OK, that sucked. It’s over now, though. We can’t change it, and we still have everything we can do as a team to look forward to. I think guys just have a really good mindset about that. We’re not going to let last week derail our season.”