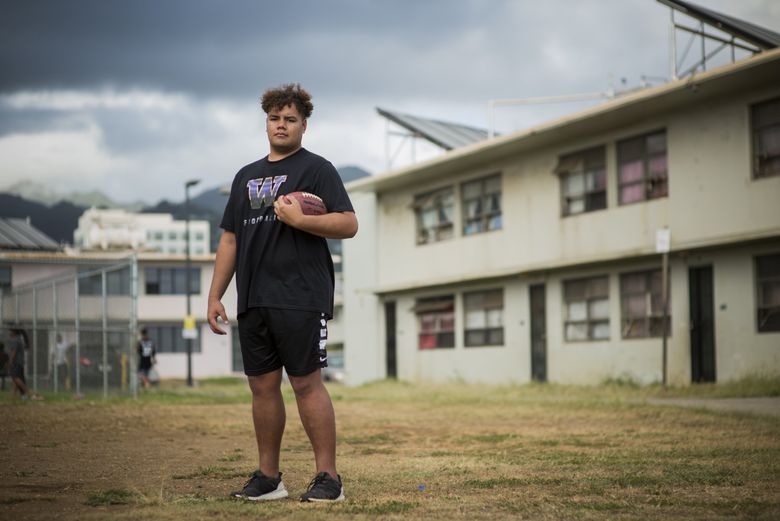 Faatui Tuitele, St Louis High School football player and top recruit in University of Washington’s 2019 class, at the Mayor Wright Housing where he grew up. (Elyse Butler / Special to The Seattle Times)

Washington’s incoming freshman defensive tackle remembers the tap-tap-tap of their paws scurrying stealthily across the kitchen, dodging rat traps and fellow rodents in a desperate search for dinner. When the Tuiteles were awake, and the spring-loaded traps weren’t working, they’d bludgeon the remaining rats with a blood-stained cricket bat. Then they’d empty the carcasses into a dust pan; a decades-long turf war would claim another casualty.

But late at night, the rats ran free. A 6-year-old Faatui lay in the darkness — surrounded by life and death — sweating in the sticky, inescapable Hawaii heat. He shared a roughly 1,000-square-foot, three-bedroom apartment with 11 family members — parents, grandparents, sister, aunt, uncle and cousins. They slept on beds; they slept on sofas. When bed bugs consumed the mattresses and couches, they donated them to the dumpster and spread sheets on the floor.

But Faatuiolemotu — “Faatui” for short, “Tui” for shorter — couldn’t always sleep. He’d lie on the floor and listen — to the rats; to the gun blasts; to the crickets and cockroaches; to the snores and wailing sirens; to the whirring of police helicopters hovering overhead; to the only Hawaii he ever knew; to the soundtrack of home.

“Home,” for Faatui Tuitele, was Mayor Wright Homes — one of Hawaii’s largest and most infamous projects. It was a place Honolulu Magazine dramatically dubbed “Public Housing Hell.” It was Kalihi — a diverse neighborhood on the northern outskirts of downtown Honolulu.

In the Hawaiian language, ka-lihi literally translates to “the edge.”

Since moving from American Samoa more than five decades ago, that’s where the Tuiteles have been living.

That’s what Justin Tuitele was always told. That’s what an adolescence spent teetering on ka-lihi always taught him. That’s what he saw in the mile-long stroll to school down Vineyard Boulevard, repeating the same sad parade past addicts and drug dealers and prostitutes and police.

Who could find love in a place like this?

“I never thought it was wrong,” Faatui’s father told The Times last spring. “I just thought it was a normal life, seeing all these drug deals go down and people getting beat up for no reason and police raids. As kids we were like, ‘Hey look, that house is getting raided!’ That was nothing. We just walked right by.”

He walked right by, and he fit right in. In middle school, Justin and his friends founded their own gang — F.O.B. (“Fresh off the Boat”) Mob. They wore red, and they claimed a little corner of ka-lihi.

“We were mostly on that little kid stuff, just straight-up gang-banging, going out looking for trouble,” Justin Tuitele said. “We used to go to Waikiki and do dumb kid stuff, beat up some tourists for nothing. We’d rob tourists.

“When we got to 18, 19 (years old), that’s when the heavy stuff started hitting. My boys started to sell drugs. I was like, ‘Man, I’ve seen all of that.’ We had family and friends that went to jail for selling drugs. I was the one in the gang that couldn’t even touch that.”

Still, Justin — whose only documented legal infraction is driving without a valid license in 2005 — admits that he “had a lot of close calls. I had a little rap sheet before I turned 18.”

That’s when he met Loitera.

“That was a turning point,” said Justin Tuitele, who’s built like a grizzly bear with a warm laugh and a graying beard. “A lot of my friends were either going to jail or they were hooked on drugs. When I first met my wife, she’s the one who kind of kept me busy. She turned my life around.

“We had Tui a year later and the rest was history. I started slowly getting away from that life, and then once I had my daughter (Felicity) two years after Tui, that’s really … when you have a girl, we tell my friends and all my boys that girls really put a stamp on your life and make you think really hard about what you do.”

Justin Tuitele found love — and a new life — in the middle of Mayor Wright. He found purpose and perspective.

He wasn’t the only one.

Faatui Tuitele still remembers the feeling of bare feet on a dirt field.

Nowadays, that same space is virtually unrecognizable, hidden under symmetrical strips of artificial turf. But back then, it was just mud, cigarette butts and broken bottles. Just dirt and desperate dreams.

That’s where a big-boned kid with frizzy brown curls found an outlet for his energy.

“Football was basically an escape from reality,” Faatui Tuitele said. “Everybody played football on the big dirt field in the middle of Mayor Wright Housing with literally no shoes on, no slippers on. It was just barefoot.

“That’s how it was when we grew up. We didn’t have a lot, but we always had enough.”

Granted, the Tuiteles rarely had hot water. The cream and sage green paint on the outside of their apartment was yellowed and peeling. Air conditioning was a hopeless dream.

Mayor Wright’s 364 units, built in 1953, were incurably infested with generations of mice, cockroaches and the ever-elusive rats. Renovations were decades overdue. Like his father, Faatui walked on blood-stained sidewalks to Ka’iulani Elementary School and Central Middle School, past lines of drug dealers and prostitutes.

But on the big dirt field, Faatui was fearless; he was focused. His bare feet were balletic, dancing deftly between defenders. He glimpsed a possible future far away from the streets.

“Playing football from a young age on that big dirt field helped me to stay out of trouble and keep my mind right,” he said. “It helped me to grow to love the sport that I play now. I owe that love of football to when I first started playing at Mayor Wright.”

He owes Mayor Wright a lot more than that. An adolescence on ka-lihi taught Faatui, according to his father, “to be grateful and never take anything for granted.” His family was formed there; it’s where Justin and Loitera met. It was home, and it kept him humble.

In Faatui’s eyes, at least, it was closer to paradise than “Public Housing Hell.”

“Honestly, those were the best years of my life,” Faatui said. “It was such a humbling experience, going through all of that. I have so many fond memories of playing outside with my friends and playing until the lights came on and being able to meet so many great people.

“I’m not going to lie, I would do it all over again if I could.”

Tui remembers going door-to-door, unit-to-unit, trick-or-treating on Halloween. He remembers the Hawaii Foodbank’s annual “Kids for Life” campaigns, balancing Oreos on his forehead to win boxes of canned goods to bring home beaming to his family.

Who could find love in a place like this?

Look inside and you’ll see the answer.

“It keeps my heart going,” Faatui said. “It keeps me motivated, because the ultimate goal is to give back to my family for all they’ve given to me, for all the years that we struggled. They didn’t show us that they were struggling. They just gave us the best they had.

“That’s why I do what I do every day in life, whether it’s school or sports. I do it all for them.”

Faatui Tuitele is bringing Mayor Wright with him to Washington.

But the 6-foot-3, 304-pound defensive tackle brought it to Saint Louis School first. Faatui closed his high school career with three consecutive state titles. He was ranked as the No. 2 player in Hawaii by 247Sports.

He coveted the kid’s athleticism, explosiveness and versatility. There was an instant familiarity.

In Faatui, he saw himself.

“My parents are actually from Kalihi, from where he was raised,” said Malloe, who played safety and linebacker at UW from 1993-96 after attending Kamehameha School, located less than seven miles from Saint Louis. “His work ethic, to me, you know what he comes from, what he stands for. His family is everything for him. It’s the name that he represents.”

Faatui has represented his name — and his neighborhood — both on the field and in the class room. He was named a USA Today and Maxpreps.com All-American in 2018, as well as USA Today and the Honolulu Star-Advertiser’s Defensive Player of the Year. He also earned a 3.9 GPA in four years at Saint Louis, and he plans to major in either medicine, law or criminal justice at UW.

Still, this future Faatui glimpsed on the big dirt field was never guaranteed. It was a mountain he summited one step — one day, one positive decision — at a time. Not everybody did.

But roughly 15 years ago, Justin started climbing. He gave up the gang to become a better father. In 2012, he moved his immediate family to Kukui Gardens, an apartment located just across Liliha Street — a five-minute walk from Mayor Wright. Today, he runs security for a number of night clubs in Hawaii. Once Felicity graduates from high school, the family is even considering following Faatui to Seattle.

He has long since changed his life. But the streets leave scars.

“I don’t own one piece of blue clothing,” Justin said. “Even though I don’t condone my kids being in a gang, I still can’t even buy blue for some reason. It’s not like I don’t like blue. I’ve got plenty of Crip friends now. I’m older. But it just stuck with me.”

The Tuiteles aren’t trying to pave over their past. They aren’t hiding a damn thing. In fact, it’s quite the opposite. Faatui has his last name tattooed across his stomach, and the only home he’s ever known is inked in bold black letters on his back:

For better or worse, Faatui’s background is baked into his blood. He’s out to prove — with or without two working pectoral tendons, but more on that in our accompanying story — that Mayor Wright shouldn’t be reduced to a sensational headline in Honolulu Magazine.

“If you say ‘Mayor Wright Housing,’ automatically people are going to say, ‘That’s gangs. This boy is from a gang-banging background. This kid is a bad kid,’ ” Justin said. “I think that’s why he wants to show everybody that, coming from Mayor Wright Housing, he can make it out with sports and school.

“I always told him to be proud of where he came from. Especially when he first went to Saint Louis, even the kids’ parents used to say, ‘That kid’s from Mayor Wright?’ ”

That kid’s from Mayor Wright; he’s from ka-lihi. He’s from the floor of a three-bedroom apartment, surrounded by life (and love) and death.