On Aug. 30, 2021, Jimmy Lake sat at a table inside the Husky Stadium tunnel and touted the depth of his running back room.

“The stable is deep. The stable is deep,” Lake said with a wide smile, five days before No. 20 Washington welcomed Montana in its season opener. “We have a bunch of players who have played a lot of football for us in our running-back room. It’s always nice to get a fresh guy back there going at our opponent.

“So you guys see the depth chart there — guys with a bunch of carries, that have made a bunch of plays for us over the years. You’ll see those guys on Saturday.” 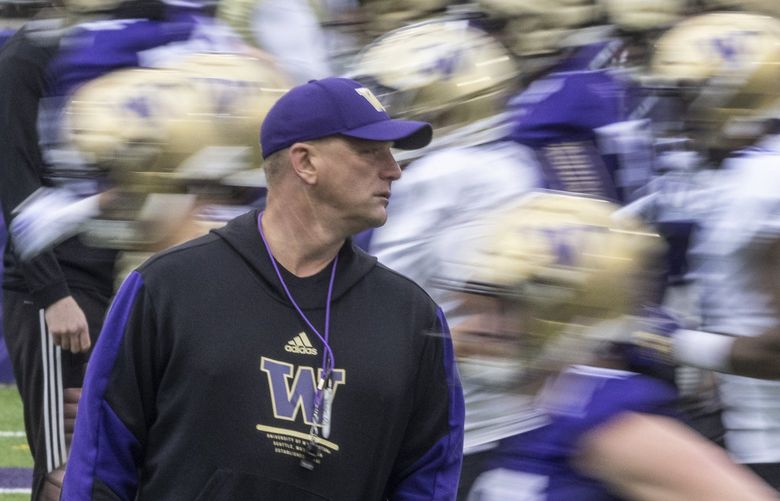 Fans certainly saw them struggle. Come Saturday, the Huskies managed just 65 rushing yards and 2.4 yards per carry in a 13-7 defeat to FCS Montana — perhaps the worst loss in program history. UW finished a dreadful 4-8 campaign ranking 11th in the Pac-12 in rushing offense (98.42 yards per game) and dead last in yards per carry (3.19). Lake and offensive coordinator John Donovan’s jobs were open by season’s end.

Even without departing seniors Sean McGrew and Kamari Pleasant, the Huskies have seven scholarship athletes in their running back room this spring.

The stable is still (technically) deep … and disappointing?

“I thought we’d have more depth at the running-back position, honestly,” UW offensive coordinator and quarterbacks coach Ryan Grubb said Monday. “I know they graduated two seniors last year. I just thought that would be a little stronger at this point. With CD (Cameron Davis) and Richard (Newton) out with injuries right now, probably part of it is those are your two most experienced guys.”

Later, when listing the Huskies’ potential playmakers, Grubb lauded wide receivers Rome Odunze, Jalen McMillan and Ja’Lynn Polk, as well as tight ends Devin Culp and Jack Westover, before adding: “I think there’s a lot of unproven situations in the running-back room. I think we’ve got a lot of work to do in there.”

Which is why, when Washington’s offense lined up for the first time in the Kalen DeBoer Era, its starting running back was … Camden Sirmon.

“He’s a guy that’s really bright, tough, physical, over 200 pounds,” Grubb said of Sirmon, who is officially listed at 195. “So he’s a guy who maybe can give it a go during spring and we’ll see how he looks at tailback full time.”

Added McGrew, unprompted, at Tuesday’s pro day: “(Sirmon’s) a nice addition to the room, too. I’m hoping he gets some nice runs in spring ball so y’all can see he’s actually a good running back.”

For better or worse, it appears Sirmon won’t be lacking opportunities. The second-team running back on Wednesday was sophomore New Mexico transfer Aaron Dumas, who led the Lobos with 658 rushing yards and 4.83 yards per carry in 11 games last fall. Redshirt freshman Jay’Veon Sunday worked into the rotation as well.

Come September, Davis and Newton — both of whom Grubb said will be back for fall camp — will likely lead the way for Washington.

But what does DeBoer even want out of a Husky running back?

“I’m good with different body types and different styles,” he said. “It isn’t like we’ve got to have one (type of back). Because you’re going to need a back in short yardage and a back that can do different things, protect and so forth.

“But in the pass game it’s kind of like a quarterback. A quarterback has to start with the ability to throw it, but anything he can do with his legs is an added bonus. That’s the same thing with a running back, except the other way. Of course he has to be able to run, but the things he can do in the pass game is certainly going to benefit him and us as well.”

They ran, they caught and they blocked.

But when he’s done throwing punches, can the heavyweight catch?

Based on bodies, the stable is — or will be — deep.

It’s unclear whether it can be versatile.