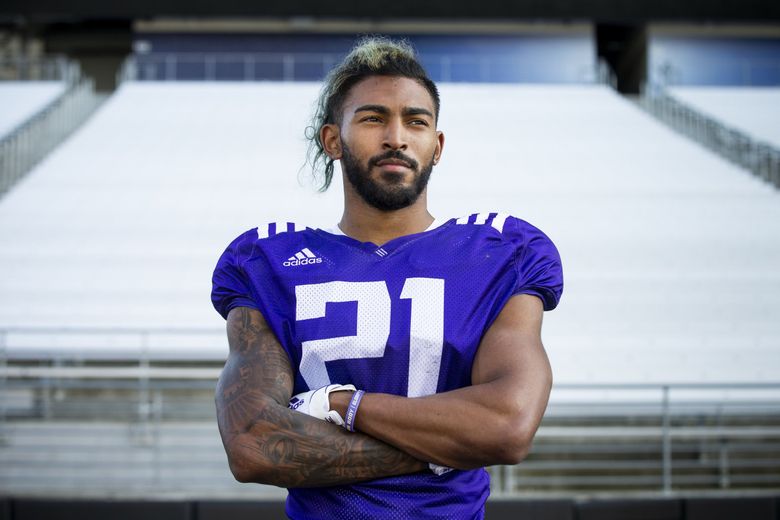 He didn’t know where his walk would lead him. It didn’t matter. He just wanted to be alone.

Once the sights of people and the city’s busy pace faded into the background, he knew he was safe to stop. He found a nearby bench and sat down — like he had every night for the past three weeks.

The night sky scattered light from the stars above as a cloud of negativity formed in his head.

He was alone, and finally, he could find release. All the built-up thoughts he had kept to himself, all the negativity and doubt, and strands of positivity he was so desperately holding on to, all came rushing out.

For Quinten Pounds, these nights of solitude became moments of relief as he sat out his freshman year of football at Washington. Three games in and the wide receiver’s season had been cut short due to a torn ACL.

He had no idea this would become his reality.

In his four years of football at UW, Pounds has only played one full season. He’s missed more than 40% of the Huskies’ games during his time in Seattle because of tearing his ACL three times. Each time, Pounds underwent surgery and physical therapy, watching his team from the sideline.

Yet, he never gave up. With the support of his first coach and his grandfather, each season Pounds returned to the field, more dedicated than the time before. Now, in his final and fifth season for Washington, he’s making his last chance count.

“People say, how do you keep coming back?” Pounds said. “I came back once; I don’t see why I can’t keep doing it again. I just can’t give up on my Dawgs out here. They’re the people I love, so there’s no way I can give up on them.”

Pounds’ freshman year at Washington started as he had envisioned. He impressed with his skills and continued to improve in practices. He even began earning playing time in games.

Yet all that changed when he injured his right knee during practice before the team’s fifth game of the season. Pounds, who had never been severely injured before, felt intense pain the moment it happened but brushed it off and awaited results from the trainers.

His heart broke when he heard the news. His season was over. He had torn his ACL and would need surgery.

“I didn’t believe it happened,” Pounds said. “My first reaction was trying to figure out how I was going to tell my family because they really wanted to see me play. I just wanted to be able to experience that year with my team on the field, instead of on the sideline.”

“I felt like I couldn’t even breathe,” she said. “It was just right in my gut and it hurt so bad because as a mother, you don’t want anything bad for your kid especially in something they love.”

She flew to Washington for Pounds’ surgery and the first weeks of his recovery. But while Pounds’ body was healing, a wave of negativity began to take shape in his thoughts.

He thought about quitting football. He was sad and hurt, and didn’t want to disappoint his family, so he kept the negativity to himself, only allowing its release on his late-night walks.

“I used to keep it all to myself and not talk to anyone,” Pounds said. “For like three weeks straight, I used to just take a walk at night and just appreciate Seattle and just talk to myself. I didn’t want to talk to anyone else about it. Going out to talk like that was a way of treatment for myself and making things better.

“At times where I’d just be there, sitting in my room and bored and alone, I would get negative. I felt like if I got outside and got some fresh air it would help me reset and really be thankful about where I am in life and all that I overcame.”

Which freshman will avoid redshirt seasons this fall?

Unable to be with Pounds throughout the majority of his recovery, Mia reached out to Mike Parcells, who was Pounds’ Pop Warner coach and remained supportive throughout Pounds’ football career.

“When I heard it had happened to him and I originally reached out to him, he was kind of depressed,” Parcells said. “I could just tell on the phone. His tone of voice and telling me how he had worked so hard and out of nowhere this injury came and set him back.”

Parcells encouraged Pounds not to give up. He told him to have faith in the surgery and rehab process, knowing how important football was to Pounds.

“He reminded me of who I am and how when I first started football, I started it with him and all the things we used to do together, it just brought back old memories and I remembered to just have fun with it,” Pounds said. “This is something I’ve been doing my whole life, this is something I really care about and love so I couldn’t just give it up that easy.”

Pounds pushed forward and excelled in his rehab and physical therapy. He stayed healthy and soon found himself back in training camp for his sophomore year.

In an injury-free second season, he played in all 14 games, including two starts and six receptions for 86 yards — the lowest among UW receivers that season. But he did grab his first collegiate touchdown on a 26-yard pass in Washington’s 59-14 win over Idaho.

Pounds’ next season started with more promise. In UW’s first Pac-12 game of 2017, he reeled in a spectacular 43-yard touchdown with two Colorado defenders draped over him. But after eight games, 10 catches and 155 yards and a touchdown, his season was again derailed by an ACL tear — this time in his left knee. He again underwent surgery and watched the season finish from the sideline.

Around the same time of Pounds’ surgery, his grandfather, Benjamin Martinez, was diagnosed with stomach cancer and underwent surgery.

Pounds saw what his grandfather was going through and knew he had to be positive.

“I looked and saw what he was going through and how hard he was fighting, I realized an ACL tear compared to cancer is nothing,” Pounds said. “He had his life on the line and all I had was football on the line. If he could fight that hard just to stay here for us and show a great example like that, then I could do the same thing and show a great example for my teammates.”

Pounds returned in a big way the next year, starting off the season with a one-handed 13-yard touchdown catch in Washington’s opener against Auburn.

The days of sitting sidelined and nursing injured knees were seemingly behind him. He was healthy and back to normal.

To celebrate his return, 25 to 30 members of Pounds’ family drove to Los Angeles to watch UW play UCLA.

Pounds had a pair of big first-down catches in just over half the game for 31 yards, as UW got out to a 24-7 halftime lead. It was the performance he and his family had been waiting for.

But less than 10 minutes into the second half, Pounds fell awkwardly on a tackle.

From the stands above, his older brother, Jorden, knew something was wrong. He told Mia it was Pounds’ ACL, but she didn’t fully believe him and watched Pounds play the rest of the game.

Jorden insisted his mom talk to UW’s trainers. Outside of Pounds’ experience, Jorden was familiar with the injury, having experienced two ACL tears that ultimately ended his football playing days.

His intuition was right. When trainers evaluated Pounds after the game, they confirmed he had torn his right ACL yet again. He would need surgery and would miss the remaining eight games of the season.

To make matters worse, his grandfather’s cancer had returned and he needed extensive treatment.

With graduation in the spring, Pounds began to doubt if it was worth coming back for a redshirt senior season. He missed his family and felt bad he couldn’t be there to support his grandfather.

“He was a little bit doubtful that third injury, I’m not gonna lie, as positive as he is, he was getting a little negative about playing football, about having surgery again,” Mia said.

With Pounds having only one more chance to continue his collegiate football career, Martinez knew he had to support his grandson just as Pounds had supported him.

“I just kept talking to him about the other players, especially in the NFL, that have had similar injuries,” Martinez said. “I told him, ‘There are a lot of guys out there that are in the same spot that you’re in and they’re having their best comebacks. Some of their best years are after injuries.’ I said, ‘There’s no reason why you can’t do it. You’re just as talented as they are. If you really love the sport, then there is no reason why you can’t keep playing.’”

This summer, Pounds entered training camp for his fifth time as a Husky. Once again fully healthy, and once again out to prove himself. Out of the team’s 14 wide receivers, he’s one of four seniors leading a group of mostly underclassmen into a season with high expectations on offense.

“Coming off three ACL injuries, that’s incredible,” said senior wide receiver Aaron Fuller. “You don’t really see many people playing after one or two. It’s not easy to come back from that, not mentally or physically. He’s incredible.”

No matter what happens this season, Pounds has found light in his experience by using his story to help inspire his teammates during times of injury setbacks.

“I know that when you get injured and go through all that process of treatment and rehab process, that it gets hard and that it gets repetitive and you get tired of it,” Pounds said. “But the more positive you are, the better the process is going to be and the more you are going to enjoy it.”

As Pounds will look to make this season count, his family in California will be hoping he finishes his time at UW with a full season of good health.

“He was able to come back all three times, but this is the last one and we’re keeping our fingers crossed on this one,” Martinez said.