In the Jimmy Lake Era — which began as Chris Petersen’s defensive-backs coach in 2014, and ended abruptly after 13 games as the Husky head coach in 2021 — eight defensive backs were selected in the NFL draft.

(That doesn’t count Marcus Peters, who was taken by the Kansas City Chiefs with the 18th overall pick in 2015 after being dismissed from UW, and doesn’t associate himself with the school.)

Of those eight NFL DBs, five — Kevin King, Budda Baker, Sidney Jones, Byron Murphy and Taylor Rapp — were selected in the second round.

None went in the first.

So far, mock drafts have been favorable. In his latest projection on Feb. 16, ESPN NFL draft analyst Todd McShay sent McDuffie to the Minnesota Vikings at No. 12 overall and Gordon to the New England Patriots at No. 21. Though they didn’t include Gordon, recent mock drafts from four separate CBS Sports analysts each featured McDuffie in the top 32 — ranging from No. 14 to No. 20. A Pro Football Focus mock draft Monday paired McDuffie with the Atlanta Falcons and their eighth overall pick. 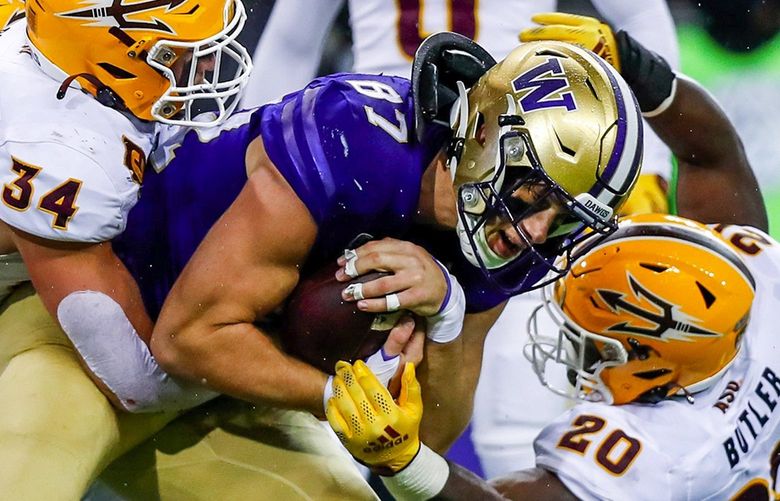 Cade Otton could be UW’s next NFL tight end, and he wouldn’t mind staying close to home

And, when ranking the draft’s top 50 prospects this week, NFL.com analyst Daniel Jeremiah placed McDuffie at No. 12 and Gordon at No. 20.

When asked on a conference call last Friday who the Dallas Cowboys might choose at No. 24, Jeremiah mentioned a familiar name.

“When you look at them in this upcoming draft and you say, ‘OK, defensively you need a corner,’ Kyler Gordon from Washington is somebody I think would be a fascinating fit there, because he’s got the size and length that you love. He’s big-time explosive. When you get to the combine he’s going to jump over 40 inches. He’s going to run in the 4.3s. He’s a dynamic athlete. It would be fun to see him on the other side of (Trevon) Diggs. I think he would be a great fit there.”

Speaking of getting to the combine, both McDuffie and Gordon — as well as former UW tight end Cade Otton and offensive lineman Luke Wattenberg — are expected to attend the annual NFL Scouting Combine in Indianapolis this week (though an ankle injury will prevent Otton from competing). McDuffie and Gordon are scheduled to complete media sessions and interviews on Saturday and drills on Sunday.

And according to FOX Sports draft analyst Rob Rang — who has assigned both UW DBs more modest grades, with McDuffie going in the late first to mid-second round and Gordon in the second or early third — they’ll have to impress in the pre-draft process to buck the second-round trend.

“I’m very curious to see how Trent McDuffie works out,” Rang said Monday. “Unfortunately, we’ve seen so many high-profile defensive backs here in recent years that did not work out quite as well as expected (like Rapp’s 4.76-second 40-yard dash, or Murphy’s 4.55), and then they wound up falling on draft day.

“I don’t believe that Trent McDuffie has great size or elite athleticism. I just think he’s a terrific football player. So I would love to see him go in the first round and think he is a future NFL starter. But at the same time, because I don’t expect to see him work out exceptionally well — and I do expect to see some other cornerbacks work out very, very well — I would be surprised to see McDuffie drafted that high.”

While McDuffie’s athleticism and measurables may be suspect, the same can’t be said of Gordon — the 6-foot, 200-pounder from Mukilteo. ESPN draft analyst Matt Miller tweeted last week: “Don’t be surprised when Kyler Gordon is the overall ‘winner’ of the Combine. Pound-for-pound I think he’s the most athletic overall player in the ’22 draft.”

But to go in the first round, teams will also have to fall in love with Gordon’s tape.

“I think Kyler Gordon does have the higher ceiling as well as a lower floor (than McDuffie),” Rang said. “To me, he’s a lot more of a boom-or-bust kind of a prospect. I love the athletic ability. He looks like a Greek god. He should test off the charts. But he is not as reliable of an open-field tackler, in my opinion. He has not been as sticky in coverage, in terms of consistency, over his career.

“With McDuffie, I see one of the most instinctive, well-rounded defensive backs in this year’s draft class. I think this is one of the greatest defensive-back classes we’ve seen in a long, long time.”

But will a lack of explosiveness ultimately limit the Tumwater tight end’s ceiling?

“I think he has a chance to go in the third round, but third-to-fifth round (is a realistic range),” Rang said. “I see another guy who’s not an elite athlete, in my opinion. He’s just a really good football player. He kind of reminds me in some ways of Will Dissly, in that he’s got some of the softest hands of any tight end or pass-catcher in this draft class.

“He’s not as big or physical at the point of attack as Dissly. And like Dissly, I don’t expect him to run particularly well. With so many tight ends in this era being those seam threats, I don’t know that he is going to wow people with his athletic traits as much as he’s really going to impress people with his interview process and how well he catches the ball.”

He may not need to be to make it.

“He practiced really well at the East-West Shrine Bowl,” Rang said. “He performed well there in terms of the practices, and I know he interviewed really well. People were excited about how he did there.

“This is a solid center class. It’s got a lot of guys that I expect to go in the middle to late rounds that I think are possible future NFL guys. With his versatility, I think he’s right in that mix. So I think he’s got a pretty good chance at being drafted, and if he’s not drafted outright he certainly will be a high-profile free-agent prospect. He’s someone I have some confidence in. I believe he can buck the odds and be a guy who can have an NFL career.”