Jimmy Lambright was covered in blood.

And, before we explain why, just know: this is not a football story.

It’s a story that Ted Jensen — a retired teacher at Juanita High School in Kirkland — is telling on Monday morning from his home in Goodyear, Ariz. It happened on the track at Everett Memorial Stadium some 60 years ago. Back then, Jensen and Lambright — UW’s legendary football coach, who died this weekend at age 77 — both attended Everett High School. And, besides starring at linebacker for the Gulls, Lambright also participated in track and field.

On the day in question, he was running. He was also flying and falling.

“He was the last leg of a relay,” Jensen, who was a spectator that day, says in a phone interview with The Times. “This was a track of crushed brick, with red brick and small rocks. He was trying to catch the guy ahead of him. As he came across the tape, he was running so fast and he dove — like, flying — and just eagled out like a baseball player stealing headfirst on that gravel. Everyone was just awed.

“I don’t think he won, but he came pretty close.” 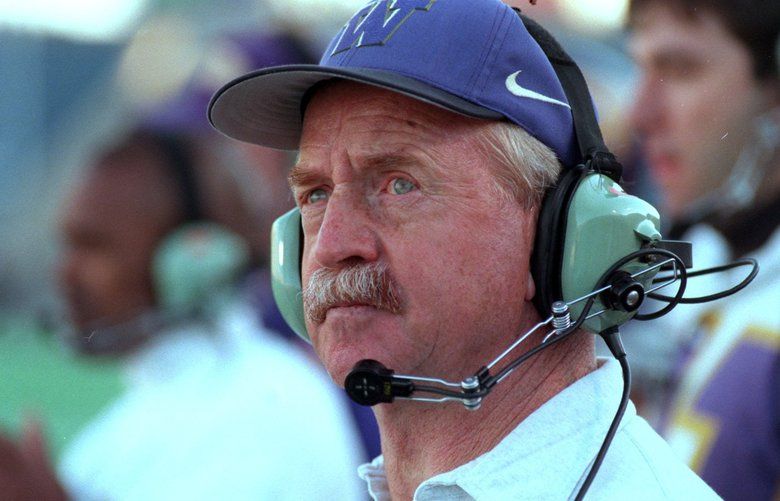 And in this case, there was a price — and no, it wasn’t pretty.

“He got up and his body was ripped, with the skin off and blood everywhere — elbows, knees. I mean, God,” says Jensen, 76, picturing it six decades later. “’Wow.’ Everyone was saying that. That was the competitiveness that he had in his heart.”

It’s the competitiveness Lambright needed to succeed at organized sports. Because, to be clear, he was not an elite athlete. In his senior season at UW in 1964, the future Husky head coach was listed at 5-foot-11 and 185 pounds. He earned first-team All-Coast honors at linebacker and defensive end anyway.

And, if not for Don McKeta, he might have never left the bench.

“He started out as a defensive back. He wasn’t the fastest guy on the field, so I talked with (head assistant Tom) Tipps about making Jimmy a linebacker. They always questioned him because of his size. I told coach, ‘You can’t measure his size. You have to measure his desire and his heart.’”

Lambright’s heart made up for his mediocre measurables, and he won UW’s Guy Flaherty Most Inspirational Award in his senior season as a result. It’s also a reason he was voted Everett High School’s lone captain by his teammates during his senior football season in 1960.

“He would speak to us in the big locker room, and everybody would be really quiet,” says Jensen, a former offensive guard for the Gulls. “It’s not that he was a great orator, but everyone respected him tremendously.”

They respected his competitiveness, his passion and his leadership.

And they also respected Lambright, because he respected them.

“One time when the scrubs were playing against the varsity, he was a linebacker and I was an offensive guard,” Jensen explains. “He was playing straight across, three or four feet in front of me. On this one particular play, I sort of faked like I was going to block somebody else, and I blocked him and knocked him back a little bit and down on one knee.

“He jumped up really fast. Now I’m just a scrub, and he pulls me up by my shoulder pads and says, ‘That was a great block, Jensen.’ For him to give any compliments out, I remember that so well. He was held in such high regard by all the players.”

It was no different when Lambright eventually launched his coaching career. He started as an assistant at Fife High School and Shoreline Community College before joining Jim Owens’ staff at UW in 1969. He became Don James’ defensive coordinator in 1978 and ultimately succeeded him, while shouldering significant sanctions, in 1993. He compiled a 44-25-1 record in six seasons as the Huskies’ head coach, before being fired in 1998.

But Lambright’s legacy will always be intertwined with the UW defenses that reached three consecutive Rose Bowls from 1990 to 1992, won the 1991 national title and allowed an average of 13.4 points per game along the way. Jensen says that “Lambright, by far, was the pride and joy of the Everett sports community.” He led his players with an arguably unparalleled passion.

And that was already evident, long before Jimmy was just Jim.

“I always thought I would have loved to have been in his huddle back in the day,” says former UW All-American linebacker Dave Hoffmann, who played for Lambright from 1989 to 1992. “I would have loved to have taken the field with a guy like him, with his passion and his tenacity and work ethic that he exhibited as a coach. Because I’ve heard the stories of him as a player as well.”

Jensen’s is proof they weren’t just football stories, either. Lambright was willing to run, dive, fly, fall and bleed … to win.

And through 386 games as a player, assistant, defensive coordinator and head coach at the University of Washington — more than any other person — Jimmy Lambright did an awful lot of winning.

“Really, words can’t express the love and the pride Jimmy had for being a Husky,” McKeta says. “He was all Husky, all the time, and it showed. I know when he arrives up at the pearly gates, he’s going to be greeted with a purple shirt.”