In an interview on 950 AM KJR on Wednesday, UW’s outgoing defensive coordinator — who accepted the same position on Steve Sarkisian’s staff at Texas this week — was asked about the speculation that he’s leaving because of disagreements with Husky head coach Jimmy Lake, or because he couldn’t have complete control of the defense at UW.

“Where are they getting their information, and who’s saying this? Is this coming from the third-grade teacher down the street?” Kwiatkowski said. “No! No. It’s all hyperbole. It’s BS.”

He added: “Put all that other BS to rest.” 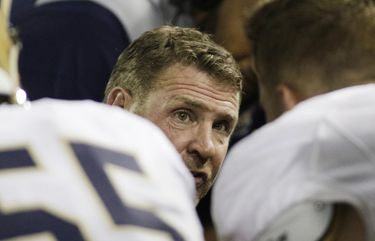 In reality, Kwiatkowski said, he recently received an inquiry from an old coaching buddy, which led to a phone call from Sarkisian — who, you might remember, previously served as the Huskies’ head coach from 2009 to 2013. He said that “we started talking about his vision, direction, the staff. One thing led to another, and if you pair that with the staff he’s putting together, the guys I know on the staff … I’ve been here for seven years. The timing was right for me to make this move and try another adventure, another challenge, and see where it takes me.”

Now, it appears he’s ready to take his coaching career in a new literal direction.

As of Wednesday evening, details of a new contract for Kwiatkowski — who was set to make $1.1 million at UW in 2021 — have yet to be announced.

“You look at my track record, the longest I’ve been somewhere is nine years. I’ve not been a guy that’s been chasing jobs,” Kwiatkowski said. “I’ve been here for seven years, had a great run. I love everybody and had unbelievable relationships with everybody at the University of Washington. I think it was a combination of just getting that itch to do something different, and the University of Texas is an outstanding university in the Big 12. It’ll be fun to go out there and try to defend all those high-powered offenses.”

Kwiatkowski had no shortage of success in that department in Seattle, where Washington led the Pac-12 in scoring defense and total defense for four consecutive seasons (2015-18). But, like so many coaches and recruits in recent years, he eventually headed east.

And Kwiatkowski isn’t entirely sure how best to stop the exodus.

Yeah, it’s a little disheartening,” said Kwiatkowski, a Santa Barbara, Calif., product. “I don’t have the answer to that. Support — whether it’s fan support, whether it’s monetary support, whatever it is — it seems to be different in different parts of the country. Good, bad or indifferent, that’s the way it is.

“Growing up on the West Coast, I would love to see the Pac-12 do a lot better than it has been. I don’t know what the answer is. Got to somehow get more people fired up about football.”

It shouldn’t be difficult for Kwiatkowski to get people fired up about football at Texas.

But, before he heads out of town, Kwiatkowski had a parting message for Husky Nation.

“I just wanted to echo my appreciation and my love for all the Husky fans and all the people I met,” he said. “It was an awesome experience. I’ll carry it to the last day of my life. All these places I’ve been to, it always becomes about the people and relationships. This place is first class, and I’m going to miss it. Go Dawgs.”