Don’t expect a defensive overhaul for UW in 2020.

After all, these Huskies — under first-year coach Jimmy Lake and defensive coordinator Pete Kwiatkowski — return essentially their entire secondary, as well as blue-chip prospects in the pass rush and on the defensive line. 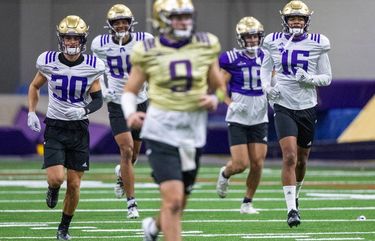 But that won’t stop us from trying.

Analysis: The first thing to know about this list: Levi Onwuzurike is not on it. And, after UW’s standout lineman declared for the NFL draft, redshirt sophomore Tuli Letuligasenoa will likely slide into a starting spot beside Josiah Bronson on the line. Letuligasenoa is a physically imposing presence who impressed at times with 23 tackles and two tackles for loss in his redshirt-freshman season. He has also shed 31 pounds since arriving on campus in 2018 and feels the lighter frame will allow him to be quicker and more durable in the middle of the line.

Though both Bronson and Taimani played in all 13 games last season, the question here is how much UW’s redshirt freshmen — Jacob Bandes, Faatui Tuitele and Noa Ngalu — will contribute. Co-defensive coordinator Ikaika Malloe will consistently use at least four linemen, and Bandes is the best bet to receive a more significant role up front.

Analysis: Like with Onwuzurike, Joe Tryon’s sudden absence is very apparent. But Kwiatkowski hopes he has an ascending crew of Husky pass rushers all the same. Sophomore Laiatu Latu is set to slide into Tryon’s starting spot, and his blend of strength and explosiveness could yield a breakout season for the former rugby star. Five-star freshman Sav’ell Smalls will also likely receive an opportunity to prove his worth rushing the passer.

On the other side, don’t discount the impact of underappreciated senior Ryan Bowman — who piled up 34 tackles, 9.5 tackles for loss, 5.5 sacks, three forced fumbles and an interception last season. At 280 pounds, Bowman is a prime candidate to shift inside on passing downs — thus allowing Laiatu and redshirt sophomore Zion Tupuola-Fetui to rush outside.

There are intriguing options here for sure. But this is not a deep position. The Huskies need Laiatu, Bowman and Co. to stay healthy in a backloaded, seven-game sprint.

Analysis: A year ago, Edefuan Ulofoshio was a redshirt-freshman walk-on and a relative afterthought on UW’s depth chart.

As the Cal game approaches, Ulofoshio has locked up a starting spot at inside linebacker — while serving as one of Washington’s vocal leaders as well. Redshirt sophomore Jackson Sirmon, who made 28 tackles in 13 games last season, seems set to start beside him.

But behind those two, UW’s personnel becomes trickier to project. It’s likely redshirt sophomore M.J. Tafisi will find his way onto the field, and redshirt freshmen Alphonzo Tuputala, Daniel Heimuli and Miki Ah You could all contribute.

Regardless of who plays, UW needs more consistent production at inside linebacker.

This time around, Ulofoshio won’t surprise anybody. But he might exceed expectations anyway.

Analysis: Jimmy Lake likes to say his defensive backs can play any secondary position — which is why UW’s roster lists only DBs, not safeties or nickelbacks or corners. And that lack of specificity makes projecting a secondary depth chart all the more challenging.

Of course, the starters are relatively secure. Cornerbacks Keith Taylor and Trent McDuffie, nickelback Elijah Molden and safeties Asa Turner and Cameron Williams are back and should receive no shortage of reps. Molden and McDuffie, in particular, could receive All-America consideration as well.

But where will redshirt sophomore Kyler Gordon — perhaps the program’s premier athlete — ultimately land? And what about Julius Irvin, who has yet to fulfill his considerable potential? And will Dominique Hampton — who has previously practiced at corner — slide back to safety after bulking up to 220 pounds?

These are good problems for defensive-backs coaches Will Harris and Terrence Brown to have. Because, yet again, UW’s defensive secondary is positively teeming with NFL talent. And soon enough, they’ll let those dawgs off the leash.

Analysis: UW will debut a pair of first-time special-teams starters this season in punter Triston Brown and long snapper Jaden Green. But the real intrigue here comes in the return game — where McDuffie, Gordon and freshman wide receiver Rome Odunze have all received reps. Special-teams coordinator Bob Gregory said this month that “we haven’t finalized a guy yet, but I do think we have some really exciting guys back there that I think will be better as returners (than in years past).”

Of course, UW has lacked a dangerous return element since record-holding wide receiver Dante Pettis’ departure. And if the UW defense does its job, McDuffie, Gordon or Odunze should have plenty of punts to return.